James Bond films are, and always have been, more imitative than innovative. Even in the 1960s they were essentially superhero movies starring an indestructible character who wore street clothes (and the occasional wet suit) instead of tights and a cape. He ran, jumped, drove and flew through loosely connected setpieces that borrowed whatever cliches happened to be popular in action cinema at that moment and amped them up with more beautiful locations, bigger explosions, cornier jokes, and lush, loud music by John Barry. Given the franchise's lineage, it was only a matter of time before the producers went the extra kilometer and started modeling the Bond films on the Batman and Marvel franchises. The new superhero films featured fussy world-building and onion-layered subplots doled out over many films and many years. Their conception owed quite a bit to comic books and to serialized television like "24" (James Bond by way of "Die Hard"). The last three Bond films drew on all of those traditions, plus Bond's own distinctive set of cliches, and set the stage for this fourth Craig outing, "Spectre."

The second Craig Bond, "Quantum of Solace," built a convoluted narrative scaffolding atop 2006's "Casino Royale"—the best movie in the fifty-plus-year-old franchise, and the only one that would satisfy even if the main character were named Oswald Chutney. The final act of "Royale" killed off Bond's one true love, Vesper Lynd (Eva Green), which set the stage for an emotionally burned-out, extra-icy Bond investigating a global conspiracy in "Solace" that turned out to be connected to the bad guys he fought in "Royale." "Spectre" occurs in the aftermath of MI-6's decimation in the last Bond picture. It retroactively forces connections between "Royale," "Solace" and "Skyfall," by way of a video-recorded warning sent to Bond by his old boss M (Judi Dench) right before her death, urging Bond to follow the trail from Mexico City to Italy to Morocco and beyond, and dig to the bottom of the conspiracy that claimed so many agents' lives.

The movie feels like a culmination of everything the franchise has been building toward since Craig stepped into the part in "Casino Royale." The most recent incarnation of Bond doesn't just have stunts and quips and gadgets and curvy women with porno names. Courtesy of "Skyfall," it has a mythology that turns Bond into Batman minus the cape and cowl, and boasts a Bond version of Stately Wayne Manor; an Alfred-the-butler figure (Albert Finney in "Skyfall"); a tragic orphan back-story (repeated via the death of Dench's matriarchal figure, who's even called "Mum"), and a Joker-type bad guy (Javier Bardem's fey torturer).

If you loved all that stuff, you'll adore "Spectre," which revives the titular organization from the Sean Connery era Bond flicks. It has subplots, characters and incidents that amount to what genre fans would call "ret-cons." And it introduces us to a new big bad, Franz Obenhauser (Christoph Waltz)—aka Ernst Stavro Blofeld; please don't act surprised, neither of us were born yesterday! This new (old, really) villain makes Bardem's character in "Skyfall" seem like a junior Joker at best, if that. He even lures Bond into a ruined building that he's transformed into a combination haunted house and gallery installation, and by the end, he acquires a scar whose gruesomeness rivals the Joker's mouth disfigurement.

If "Spectre" were a great movie, or even a consistently good one, this might be wonderful, or at least intriguing. But this is a weirdly patchy, often listless picture. The Craig Bonds are so expensive and expansive that they can't help but impress with sheer scale. And every now and then they come up with bold images, like the silhouettes of Bond and a foe grappling in front of neon signage in "Skyfall," and the overhead shot of Bond entering the bombed-out ruins of MI-6 headquarters in "Spectre" preceded by a shadow four times as long as he is tall. But an hour or two after you've seen "Spectre" the film starts evaporating from the mind, like "Skyfall" and "Solace" before it. It's filled with big sets, big stunts, and what ought to be big moments, but few of them land.

What's the problem? Maybe it's the script. It's credited to a murderer's row of gun-for-hire writers, but it can't seem to come up with anything but undistinguished chases and fights and quips pasted together by exposition that's half baked even by Bond standards. Like Christopher Nolan's Batman, Bond shows up wherever he has to be and escapes certain death as needed, without a hint as to how he pulled it off. And even by Bond's damn-the-rules, full-speed-ahead standards, the character is such a suitcase nuke in a cable-knit sweater that it's hard to see him as England's (or the West's) disreputable protector, which is how you pretty much have to see Bond if you're going to root for him. (Omelets, eggs.) In the pre-credits sequence, Bond wreaks destruction on Mexico City, creating an international incident that gets him suspended for the umpteenth time; when he argues that the terrorists he was trying to foil would've caused more damage, he sounds like a parody of the sort of hero who would say such things. At least when Tom Cruise offers similar defenses the "Mission: Impossible" movies (the latest of which has a plot not hugely different from this one's, come to think of it) it's meant to be ludicrous and frothy, not freighted with righteous woe.

Or maybe the problem is the production itself. The crew teams "Skyfall" director Sam Mendes with production designer Dennis Gassner and cinematographer Hoyte van Hoytema ("Interstellar") and fills the screen with deserts and lakes and forests and mountains and historic skylines and converging perspective lines and tastefully arranged rectangles-within-squares and shallow planes of focus (the movie often seems to be in 3-D even though it's not), but too often ends up looking rather like a SuperBowl ad for cell phone service or cologne.

Or maybe—blasphemy alert—the problem is Craig's performance. He might be the most drop-dead-serious actor  to play Bond, and he probably comes closer than anyone to making the character seem plausibly human (Pierce Brosnan had his moments, even though the scripts were even less inclined to support his efforts than Craig's). But as the character has become increasingly opaque and recessive—so much so that Mendes and company seem less interested in Bond as a cold but complex person than as a sculptural object to light and pose—you may wonder what the point is. This Bond is a sinewy husk of a man, pursing his lips and staring into the middle distance. He's turned into the narrator of Edgar Allan Poe's "The Raven" but with a sidearm. The actor and the writers give us so little to grab onto that it's hard to sense Bond's feelings, much less feel with him. Late in "Spectre," we're supposed to believe that Bond is truly attached to his love interest, Lea Seydoux's Madeleine Swann (nice double Proust reference there). She reciprocates the craggy killer's affection even though, as she rightly observes, she was living in hiding for years until Bond led the bad guys straight to her. But there's little in this film's writing of Bond, or in Craig's performance, to imply that the character is capable of investing in anything more emotionally fraught than a martini mixed with house vodka.

Or perhaps the problem is historical fatigue. Even the better bits of "Spectre," such as a close-quarters fistfight on a passenger train between Bond and a thick-necked henchman (Dave Bautista of "Guardians of the Galaxy"), and a mostly wordless, almost one-take stalking/assassination sequence set during a Day of the Dead parade in Mexico City, pale in comparison to their Bondian inspirations (respectively, "From Russia with Love," and "Live and Let Die" by way of "Octopussy"). We've been assured by the producers that "Spectre" contains homages to every previous Bond picture. That's great if you go to films mainly for Easter egg-style trivia in the form of situations and props. But it's not so great if you're inclined to take the makers of these films at their word, and expect a Bond film like "Casino Royale," something with more brains and nuance than the usual, as opposed to a film that purports to be that kind of movie but is content to posture and strut rather than doing the necessary dramatic spadework.

Whatever the explanation(s), "Spectre" is the third Bond film in a row to write conceptual and dramatic checks that the movie itself can't cash. We're at the point now where these films are consistently more fun to anticipate than they are to watch. The media campaigns tend to be more cunning and surprising than anything that ends up onscreen. This film won political correctness kudos for casting Monica Bellucci as Bond's first age-appropriate lover (she's two years older than Craig), but "Spectre" itself squanders her in two scenes, then ditches her for the 30-year old Seydoux. Blofeld's chief henchman is a bust, just a muscleman in a suit; he makes a memorably nasty entrance blinding a rival with his thumbs, but from then on, he's all sneers and punches and kicks. Blofeld fizzles, too. Waltz, who tends to give the same performance over and over with minor variations but at least has the decency to be a hoot each time, is in "Spectre" only slightly longer than Bellucci, and has been drained of the glee he displayed in Quentin Tarantino's films. The payoff of his character's storyline is so dumb that it makes the "twist" in "Star Trek Into Darkness" seem sensible and heartfelt. Stupider still is Bond's reaction when he finally gets the drop on his nemesis. Bags of Scrabble tiles make more sense.

Even the look of "Spectre" makes promises that the film won't keep. Between the copious mirror and reflection shots, the surveillance screens and wall-mounted cameras, and Waltz's all-seeing, all-knowing baddie, we're tacitly promised the first James Bond horror movie: a creepy Cubist study in voyeurism and fear, powered by nightmare logic and silhouettes and moments of physical violation; Bond by way of "The Cabinet of Dr. Caligari" or Fritz Lang's Dr. Mabuse films. Beyond novelty, such an approach would have made the film's instances of slipshod plotting feel all-of-a-piece, like the "because I said so" storytelling in Nolan's Batman pictures.

But of course "Spectre" can't give us that, because Bond films are products before they're anything else, and products aren't allowed to challenge or upset people. If Mendes didn't keep finding original ways to stage unoriginal moments, this film's star rating would be lower than it is. Even by the generous standards of Bond pictures, which have been graded on a curve since 1962, "Spectre" has to be considered a missed opportunity. 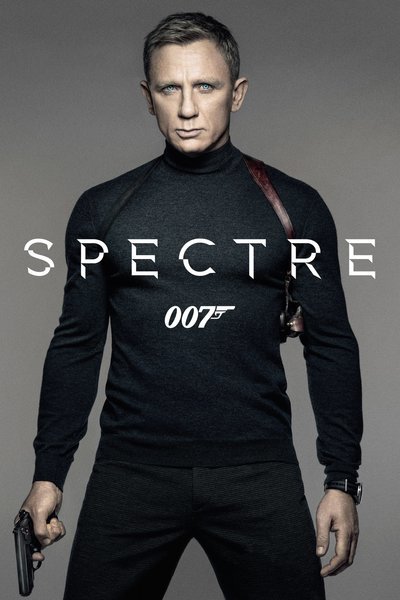 Rated PG-13 for intense sequences of action and violence, some disturbing images, sensuality and language.