Quentin Tarantino's ultraviolent, ultra-talky sorta-Western "The Hateful Eight" is an impressive display of film craft and a profoundly ugly movie—so gleeful in its violence and so nihilistic in its world view that it feels as though the director is daring his detractors to see it as a confirmation of their worst fears about his art.

Set in the post-Civil War era, the movie pits a group of criminals and criminally brutal lawmen against each other in a snowbound Wyoming cabin. Tarantino takes his sweet time assembling his core cast. He spends nearly a half-hour on a stagecoach ride that introduces a mustachioed fugitive tracker, John "The Hangman" Ruth (Kurt Russell,  talking like John Wayne); his driver O.B. (James Parks); his prisoner, the treacherous outlaw Daisy Domergue (Jennifer Jason Leigh), who's being escorted to Red Rock for hanging; incoming Red Rock sheriff Chris Mannix (Walton Goggins), a former outlaw that Ruth can't accept as a lawman, and Maj. Marquis Warren (Samuel L. Jackson), an ex-slave turned anti-Confederate war hero turned bounty hunter whose record of wartime atrocities makes Ruth distrust him and Mannix hate his guts.

When they arrive at the cabin—a watering hole known as Minnie's Haberdashery that seems as improbably vast on the inside as Snoopy's doghouse—they are joined by more characters. There's a furtive and rather cryptic Mexican (Demian Bichir) who calls himself Bob, a former Confederate general (Bruce Dern), a smug and effete British hangman (Tim Roth, filling what might otherwise be the Christoph Waltz part), and a smirking gunman named Joe Gage (Michael Madsen, doing the Michael Madsen thing). The joint's owner, Minnie, is nowhere to be found, and her husband is missing as well.

The character tally actually adds up to nine by this point, if you count the driver, but he's not really hateful, so maybe you shouldn't. And if you've glanced at a poster or trailer or IMDB, you know Tarantino will add more cast members, including Channing Tatum; Zoe Bell; Dana Gourrier of "True Detective" and "Red Band Society," and Lee Horsley, who played Archie Goodwin on "Nero Wolfe." But Tarantino's never been the sort of director you hold to implicit promises about what you're getting when you buy a ticket.

The movie is filled with playful and curious surprises: not just of the plot twist or character-revelation variety, but what might termed "formal violations" that make "The Hateful Eight" feel more experimental than classical. This is a director who hires the Mahler of spaghetti Westerns, Ennio Morricone, whose work he's sampled many times, to create an original score, then ladles it onto a film that is not a typically sumptuous revenge Western about characters' relationships to the land they're battling to claim, but something more like a crisply photographed stage play—think of Tarantino's debut film "Reservoir Dogs," most of which took place in a warehouse, but with Stetsons and dropped g's, or a prairie rat cousin of Eugene O'Neill's tailbone-busting four-hour barroom fable "The Iceman Cometh" ("The Iceman Curseth"?), but with torture; rape; point-blank gunplay; multiple, possibly false identities, and gallons of blood.

By my stopwatch, four-fifths of "The Hateful Eight" takes place indoors, first in the stagecoach traveling to Minnie's, then in the cabin and a nearby barn. Tarantino asked his regular cinematographer, Robert Richardson, to shoot in Ultra Panavision 70mm, a format that has barely been used since the "road show" epics of the 1960s, and built an overture and an intermission into his already extravagant running time, yet he's staged most of the film's action away from direct sunlight. This is all fairly perverse, but it's these kinds of choices that make Tarantino more special than the filmmakers who dream of being the next Tarantino.

The problem isn't how Tarantino tells his story, but the deficiencies in the story itself—or maybe we should put "story" in quotes, because, more so than any Tarantino film, and this is saying a lot, what's onscreen doesn't feel like an intricately interconnected series of events, all of which feed into and build upon one another, but rather a succession of set pieces, most of which are tediously repetitive. Talk talk talk talk talk talk kill; talk talk talk talk talk talk kill, and so on, and so on. The N-word is sprinkled throughout; Tarantino loves the slur nearly as much he loves bare feet. But its use in "The Hateful Eight" is more problematic than in "Django," where the term had a whiplash sting; even if you suspected Tarantino of trying to get away with something, the film's righteous ire (presenting the Confederate South as a little Nazi Germany right here in the good old USA) made you pause before writing him off as an opportunist.

That's not the case here. The in-depth conversations about the Civil War and capitalism and justice vs. frontier justice are superficially interesting, until you suspect they're not there to tie the film's characters to the American Character, but to set the stage for killings. The context of a nasty, brutish time gives the artist permission to be nasty and brutish.

When the violence arrives in "Hateful Eight," it's unmoored not just from any morality espoused by the characters (who are hateful, after all!) but also, it seems, from Tarantino's own moral compass—if indeed he has one, and after this movie I have serious doubts. From "Reservoir Dogs" and "Pulp Fiction" through his recent run of movies, he's given us a mix of proudly amoral and morally struggling characters, then shown them working through their hypocrisy and relativism in finely tuned, ping-pong style exchanges (like that final Travolta-Jackson conversation in "Pulp Fiction"). In "Hateful Eight," for the first time in Tarantino's career—and in contrast to such brutal, semi-exploitive but ultimately mournful films as "The Wild Bunch" and "U-Turn"—there's no detectable moral framework to speak of. We're just watching a bunch of scorpions in a bucket getting ready to sting each other, then stinging each other—sometimes verbally, sometimes with fists or guns or other weapons: tearing flesh, coating hardwood floors with gore and brains.  [Spoilers from here.]

Leigh's outlaw, the only woman, gets the worst of it, entering the film with a black eye, taking multiple fists to the face, and spending the final third of the film drenched in blood and missing a tooth. She doesn't wipe the blood off; this is presented as proof of her indomitability, but it plays like sheer provocation: Oh, I'm a misogynist, am I? Tough. Watch me leave the blood on her face, because I can. Like the nonstop barrage of racial slurs, the film's relentless and often comical violence against Daisy never feels truly earned. Saying, "Well, they're all outlaws, including her, and that's just how women were treated back then" feels like an awfully thin defense when you hear audiences whooping it up each time Russell punches Leigh in the face, and it dissipates during the final scene, which lingers on Daisy's death with near-pornographic fascination. In a movie filled with selfish, deceptive and murderous characters, hers is the only demise that is not just observed, but celebrated.

The pre-intermission showstopper is Warren's account of forcing the general's son to march naked through the snow, then orally raping him before killing him—an atrocity that might or might not have actually happened. It's so transparently intended as a "Wow, I can't believe the film went there!" moment that it makes every past Tarantino statement about feeling solidarity with oppressed peoples seem suspect. The bit where Warren describes his prodigious member to the general is oddly childish. Any pretense of political commentary or historical engagement vanishes, and you're left with a white filmmaker draping himself in a black leading man's mystique, like a kid putting on an Iron Man costume and running around the house telling everyone he can fly.

"The Hateful Eight" arrives when it finally seemed as if Tarantino, dissed early in his career as a brilliant but disreputable pastiche artist, was earning a new reputation as a maker of audacious revenge pictures about underdogs lashing out against oppressors: women in "Death Proof" (which feels like a more compact but deeper examination of themes from "Kill Bill"); Jews in the World War II fantasy "Inglourious Basterds"; American slaves in "Django Unchained." Those three seemed at once kidding and serious, in the manner of such Samuel Fuller melodramas as "The Naked Kiss" and "Shock Corridor" (see them if you haven't; they're amazing). In "Death Proof" and "Django," you could always see what Tarantino was going for even when he didn't pull it off. "Death Proof" played identification games by putting a male murderer and female avengers in the foreground in each of its halves, making you think about how a storyteller's choice of protagonist determines who we identify with, while "Django" saw its "Odyssey"-like story through radicalized eyes, treating violence against slaves as one of America's original sins but violence against slaveowners (and anyone who profited from slavery) as a morally justifiable skeet-shoot, because the latter had forfeited their right to be thought of as human beings.

The lyrically brutal "Basterds" was a revenge movie about revenge movies and viewer identification. It was also the ultimate examination of role-playing in both life and art—a concern that runs through all of Tarantino's movies, starting with "Reservoir Dogs," about a gang of robbers tearing themselves apart trying to figure out which of them is secretly a cop. "Basterds" aced every set piece, line and shot, giving its orphaned heroine wraithlike revenge against the Nazi war machine, wrapping up with an atrocity that gorily echoed the obscenity of concentration camp tattoos (a swastika carved into flesh with a dagger), and ending with a line that seemed, to this viewer anyway, less a boast than a statement of fact: "I think this just might be my masterpiece." But despite its closing aura of celebration, the movie was disquieting. It absolved the viewer of nothing. It was not a simple entertainment. It was complicated, and every second was deeply felt.

"Eight," in contrast, is half-assed, but carries itself like another masterpiece, swaggering and stubbing its toe and swaggering some more. It has superb photography, music, set design and performances (particularly by Russell, Goggins, Leigh and Jackson), but no fervor, no framework, no justification for its nonstop insults, provocations and atrocities. It has a bully's mentality.

Of course, none of my gripes will matter to hardcore fans, who will wave away objections to the film's methods and messages with, "Well, it's called 'The Hateful Eight'—of course it would be hateful!"—as if making a lavishly produced but ultimately empty wallow in viciousness were an OK thing to do as long as the filmmaker fessed up. It's hard to shake the suspicion that, deep down, he believes in nothing but sensation, and that he's spent the last decade or so stridently identifying with oppressed groups so that he can get a gold star for making the kinds of films he'd be making anyway.

In the end, "The Hateful Eight" is less reminiscent of any single Western than of a certain episode of "Seinfeld"—the one where Bryan Cranston plays a gentile dentist who makes Jewish jokes but insists it's OK because he's converted. "I have a suspicion," Seinfeld says, "that he's converted to Judaism just for the jokes." 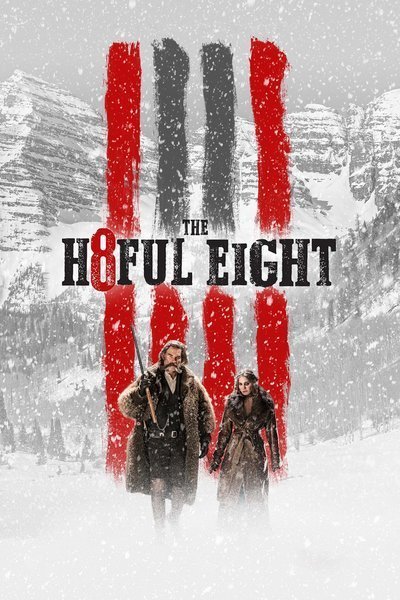