Can a movie be impeccably made—well-cast and strongly acted, flawlessly appointed and gorgeously shot—yet still leave you cold? Can it do everything right technically without touching you emotionally? Can it offer a transporting experience without changing you one bit? Such is the conundrum with “The Danish Girl.”

Given that he’s telling the story of real-life artist Einar Wegener (Eddie Redmayne)—the first-known person to undergo sexual reassignment surgery nearly a century ago when he transformed himself into Lili Elbe—director Tom Hooper plays it dismayingly safe. As was the case with his Oscar-winning “The King’s Speech” and “Les Miserables,” Hooper’s latest is tasteful and restrained to a fault. It is easier to admire than love. And maybe that’s intentional to some extent. Maybe—in adapting Lucinda Coxon’s script, based on David Ebershoff’s novel about the 1920s Danish landscape painter—Hooper aims to reach the widest possible audience by presenting such potentially challenging material in the form of a lush prestige picture.

Maybe the thinking is that the vast majority of people would be more likely to see a movie about a transgender character if it were offered as awards bait, to use a phrase that’s pejorative but apt, rather than a scrappy little indie like “Tangerine.” Between both of these movies—and the award-winning television series ‘Transparent,” and the well-documented saga of Caitlyn Jenner—the struggles transgender people have endured have been part of the consciousness and dialogue this past year like never before. “The Danish Girl” may seem zeitgeisty through sheer timing—and that may seem cynical on the surface—but it’s clear that its heart is in the right place.

But speaking of the heart, “The Danish Girl” is more likely to appeal to the head. Admittedly, there’s some striking imagery that will surely grab you: tutus hanging backstage at the ballet, illuminated from below like tulle jellyfish, or the crisp symmetry of immaculate, identical row houses, shot in widescreen. During a rare daring moment, Einar visits a peep show to mimic the stripper’s moves, and the two end up in a spontaneous sort of dance through the glass. But there are also plenty of images that are rather obvious and simplistic in their symbolism: a sheer sheet hanging between Einar and his wife Gerda (Alicia Viklander) at bedtime, providing a physical separation, or a scarf blowing away in the wind as Alexandre Desplat’s score soars with it.

The excellent “Tangerine,” by contrast, may seem like a daunting prospect: Sean Baker’s film, about a pair of trash-talking transgender prostitutes tearing through the streets of Hollywood on Christmas Eve, stars first-time actresses and was shot entirely on an iPhone. But it actually ends up being the more accessible of the two films; it’s got an immediacy and a vibrancy that “The Danish Girl” sorely lacks, as well as a genuine sense of emotional connection.

This is no fault of the film’s stars, Eddie Redmayne and Alicia Vikander, who both give deeply committed performances—although one is stronger than the other. Redmayne has proven himself a technical master of transformation; his precise performance as Stephen Hawking in last year’s “The Theory of Everything” understandably earned him an Academy Award for best actor. Once again, he’s playing a real-life figure who undergoes a physical change that puts a strain on his marriage and forces both partners to reexamine their fractured bond, even as it’s clear that they still love each other.

Hooper, working with his usual cinematographer, Danny Cohen, luxuriates in Redmayne’s androgyny as Einar steadily morphs into Lili. (Those cheekbones! Those lips! Those long, elegant limbs!) And Paco Delgado’s Jazz Age costume design is just decadent—not only for Redmayne but for the cast as a whole. But the film regards this complex figure in a way that’s mostly superficial. We never truly understand what drives Einar to become Lili completely, despite the physical danger and the social stigma; the character becomes a collection of mannerisms and proclamations. Certainly she was brave, but grasping the source and depth of that bravery would have made her feel like a fully fleshed-out person worthy of more than just polite appreciation.

The story that’s truly intriguing is the one that belongs to Vikander as Einar’s wife, Gerda—a fellow painter who struggled to be taken seriously in her husband’s shadow until she asks Einar to sit for a portrait of a ballerina and gets her first glimpse of his feminine side. Although Einar is the one who changes physically, Gerda is the one with the more compelling emotional arc. She’s in the tricky spot of having to be the rock but also evolve with an ever-changing situation, and doing so gives her more opportunities for shading.

At first, she’s accepting of Einar wearing lingerie under his suits and even a little turned on by it; playing dress-up at home eventually inspires them to enjoy lavish evenings among their friends in Copenhagen, just a couple of girls out on the town. But as it becomes increasingly clear that “Lili” isn’t just a persona but rather an expression of Einar’s true self, Gerda has to grapple with the fact that everything she’s known to be safe and true is crumbling beneath her.

At the same time, her career as a portrait artist is finally flourishing—with the blossoming Lili as her muse. And as friends new (Ben Whishaw) and old (Matthias Schoenaerts) enter the equation to lend support in various forms, they muddle matters further.

Vikander, who’s been on such a roll this year already in two extremely different films—the exquisite “Ex Machina” and the glossy romp “The Man From U.N.C.L.E.”—makes every moment of her character’s journey believable with great nuance, from her strength and optimism to her confusion and loneliness. There’s a lovely delicacy to her but also a directness that’s equally appealing.

The title refers to Redmayne’s character and the transformation he underwent to make his outsides match his insides (to borrow a line from another recent beautiful but chilly domestic drama, Angelina Jolie Pitt’s “By the Sea”). But Vikander may actually be the film’s true star. 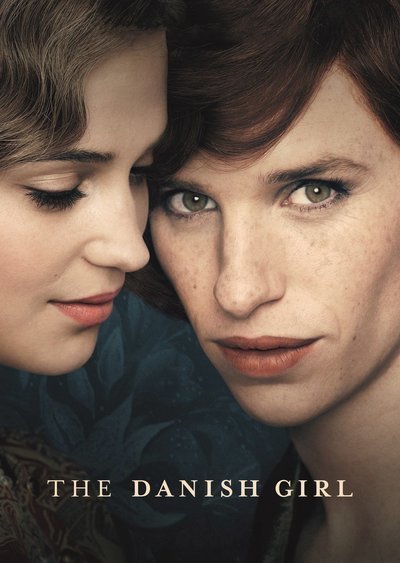 Rated R for some sexuality and full nudity.