The pre-release buzz is true: This is not your father’s financial crisis movie. Nor, for that matter, is it “The Wolf of Wall Street.” The money masters of the universe depicted in this film—and while their stories are interconnected, their lives are not, necessarily—barely drink a sufficient amount of red wine to get a good buzz on. Their buzz derives from an enhanced sense of smell. The closest to a “Wolf”-like character here is Ryan Gosling’s Jared Vennett, the most standard-issue suit-and-tie banking bro of the bunch, and part of his schtick is to stand in a conference room sniffing ostentatiously because, yes, he smells money.

The money smelt, and earned, by the adventurers of this story of the real-life 2008 world economic meltdown is arguably tainted by bad karma. Based on a book by Michael Lewis, “The Big Short” is about how several traders and hedge fund managers made fortunes because they saw that the housing market’s decline would cause a collapse of bonds contrived from sub-prime mortgages. The terminology is both dry and dizzying, the machinations incredibly convoluted. The main thesis of the story, adapted for the screen by director Adam McKay and his co-screenwriter Charles Randolph, is that as banking became the top industry of the United States, bankers deliberately concocted Byzantine financial tools whose main function was to help the rich get richer and screw over the little guy. You can expect a lot of pushback against this film of the “where do these affluent Hollywood types get off criticizing income inequality” but that won’t mean the movie is wrong.

And it really is quite a movie: entertaining and engaging, but also mortifying; a good alternate title might be “American Horror Story.” The film intertwines three discrete storylines. The first focuses on Christian Bale’s Michael Burry, a trained physician with very stunted social skills whose genius at analysis and numbers-crunching found him running a very successful West Coast hedge fund. After finding some terrifying data within the structures of a large number of mortgage bonds, he concocts a radical idea: to “short,” that is, bet against, the housing bond market, which the banks have puffed up as being unassailable. To do this he has to convince those banks to create a new financial tool, a kind of bond insurance policy. If Burry’s right and the market collapses, he and his hedge fund make stupid money. But for as long as the market stays stable, Burry and his fund are obliged to pay stupid money in premiums.

McKay is best known as the director of such comedic fare as “Anchorman,” and, for all the silly self-reflexive humor in those films, there’s a sly underlying intelligence animating them, and here that takes the form of celebrity cameos wherein attractive people such as Margot Robbie and Selena Gomez directly address the audience with cogent and colorful explanations of terms such as “sub-prime.” He also enlists “Anchorman” rep company member Steve Carell for one main role, as financial Prophet of Doom Mark Baum, whose own fund gets a whiff of what Gosling’s character is smelling and takes a piece of the action, in a partial fit of “screw the system” indignation. Carell’s self-torturing character is likely the closest thing this movie has to a directorial surrogate. Finn Wittrock and John Magaro play a couple of Jim Henson’s Hedge Fund Babies, mentored by Brad Pitt’s Ben Rickert. Rickert’s character can be read as something of a slight sendup of Pitt’s own current do-gooder persona; he’s a former master trader who left the game out of disgust, and who preaches a hippie-ish quasi-survivalist gospel to his two young acolytes even as he helps them get pretty much super-rich.

I started off feeling skeptical about this movie: the hairstyles and clothes of the main characters were more ‘90s music-video than early 2000s, and the sometimes-color-desaturated flashbacks to some characters’ back stories were a little on the drearily commonplace side. But the narrative momentum, combined with the profane wit of much of the dialogue, and the committed acting going on beneath the hairpieces, all did their job. And they got across the angry, pessimistic conviction behind the movie, which is that the major banks all engaged in fraudulent, criminal activity, and that the U.S. government bailed them out at the expense of the little guy, and that there’s no indication that the banks aren’t going to do something like the exact same thing all over again. You are free to disagree. But this is a movie that uses both cinema art and irrefutable facts to make its case. It’s strong stuff. 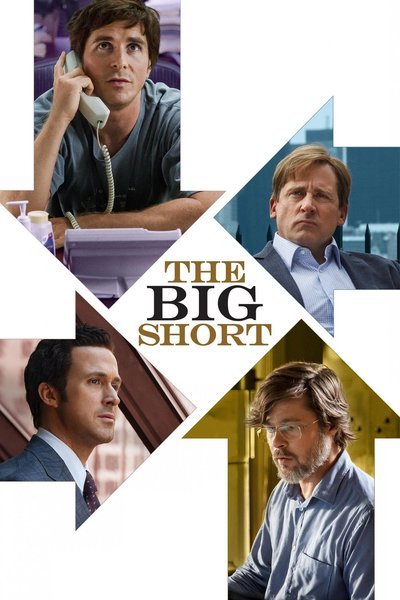 Rated R for pervasive language and some sexuality/nudity.