"The Martian," Ridley Scott's film about an astronaut surviving on a desolate planet, is at heart a shipwreck story, one that just happens to take the form of a science fiction adventure. But although the outline offers no surprises, the details and the tone feel new.

Like all the variants of "Robinson Crusoe"—including "Cast Away" and, of course, "Robinson Crusoe on Mars"—this film is about a man, Matt Damon's Mark Watney, who summons all of his ingenuity and courage to endure a seemingly impossible situation, then must deal with loneliness on top of it all. If you've ever seen a film, you know going in that things are going to turn out fine for Mark—that no studio is going to pay for a special effects driven epic about a smart, likable castaway who dies in the last five minutes. You also know that, despite the Lone Man Against Nature plot line, there's a reason why the filmmakers cast Oscar nominee Jessica Chastain as the captain of the mission that's forced to abort its exploration of the planet's surface and leave Mark for dead—and it wasn't so that she could turn tail and head for Earth with her crew in the first ten minutes and never return. You also know that, despite the heated discussions back on earth of how risky, time consuming and expensive a rescue mission would be, NASA will still have to stage one, and that any objections (mainly by Jeff Daniels' character, the agency's director) will be waved off in the name of doing what's right. Since what will happen is never in question, all that remains is "how."

Fortunately, the hows are cleverly envisioned by Scott and screenwriter Drew Goddard (who adapted Andy Weir's source novel, and also penned "The Cabin in the Woods" and many episodes of ABC's castaway drama "Lost"). The film pays thoughtful attention to basic questions like, "What do you do if the face plate of your helmet cracks?" and "How do you create a food supply on a planet that can't sustain plant life?" The short answers to those questions are, respectively, "apply duct tape" and "grow potatoes in a makeshift greenhouse fertilized with the solid waste left behind by the rest of the crew." Throughout the course of this long but never dull film, Mark makes for an affable and centered lead character—a wisecracking botanist who talks constantly to himself (and by extension the audience) in video diary entries, and sees each new crisis as a problem solving exercise, provided he can get his fear and despair under control long enough to think straight, which of course he does.

I'm making it sound as though "The Martian" is predictable. It is, but that doesn't hurt its effectiveness. The most fascinating thing about the film is how it leans into predictability rather than make a show of fighting it. In the process, comes up with a tone that I don't believe anyone has summoned in this genre, certainly not at this budget level. Of all the stories you've seen about astronauts coping with the aftermath of disaster—including "Mission to Mars" and the visually superior and more aggressively melodramatic "Gravity," which is more of a self-help parable with  religious overtones—"The Martian" is the most relaxed and funny, and maybe the warmest. Strangely like "Alien," Scott's breakthrough 1979 thriller, and maybe his follow-up "Blade Runner" as well, "The Martian" makes the future look at once spectacular and mundane. For all its splendors, the world that enfolds the characters is simply reality: the time and space in which they happen to be living.

At times it seems as if the movie's greatest artistic inspiration is not any particular previous film or novel, but the second act of "2001: A Space Odyssey," which features endearing images of Dr. Heywood Floyd anxiously reading the instructions on a zero gravity toilet, and sleeping on a Pan Am flight to an orbital space station like a businessman taking the red eye from Los Angeles to New York. Much of the film's soundtrack consists, hilariously, of disco, the only music available to Mark (via his captain's abandoned laptop). The juxtapositions of Scott's panoramic red-brown landscapes, Damon's grimy, stubbly face, and 1970s dance floor classics like "Turn the Beat Around," "Hot Stuff" and "Rock the Boat" are sublime. They make Mark's predicament seem like an elevated version of a tedious but necessary task, like tiling a roof or repainting a garage. Hard work always seems to go faster when you put some tunes on.

"The Martian" occasionally plays like an unscripted TV show about a man stranded on another planet. There's a touch of "How to" in the way Scott and Goddard tell the story. As Mark talks to himself, he walks us through his processes, showing how, for instance, he re-liquefies dried-out waste and mixes it into arid Martian soil, then inserts halved potatoes into crop furrows and waits for a sprig of green to appear. Cost-benefit analysis constantly comes into play, as when Mark drives several hundred kilometers in a rover to dig up tech left over from another Mars mission, and has to decide whether to turn off the heat in the cockpit to save power during the long journey (he decides against it, because even though the heater eats up juice, he can't function if his nether regions are frozen).

Chiwetel Ejiofor's Dr. Vincent Kapoor, the head of NASA’s Mars missions, wants to bring Mark home out of a sense of honor and obligation. All of the other characters—including Chastain's Capt. Melissa Lewis, Daniels' Teddy Sanders, and Teddy's morally indignant right hand man, Mitch Henderson (played by Sean Bean, the ideal actor to play a man of conscience)—are basically on the same page. It's not a question of whether everyone wants to do the crowd-pleasing and heroic thing, but whether it's possible. It takes a while just to get a radio message to Mars and back, and you can't just send a spacecraft there like you'd overnight-mail a birthday gift. The mission has to be prepared for, and paid for. That can take months or years. At one point the NASA people discuss whether to skip safety inspections on an unmanned flight in order to make a particular calendar window.

The NASA technicians, scientists and managers race against the clock, working through equations on wiper boards and worrying about money and fuel and safety issues, but for the most part they talk to each other without hysteria.  They say impulsive things, and then have to apologize. They crack jokes. Some of the exchanges verge on workplace comedy. Much of Scott's reputation rests on his ability to conceive and execute elegant images, often in service of grim stories, so it's easy to forget how good he is at camaraderie and banter (see "Thelma and Louise" and "Matchstick Men," among others). "The Martian" fuses these sides of his talent better than any film he's directed. At its best, it has the serene assurance of a Howard Hawks buddy adventure in which no predicament is so dire that it can't still feature a bit of light humor.

The characterizations start out feeling a bit vague and flat, but deepen through the accumulation of little details. Even supporting players who show up for a scene or two have a life force, such as Donald Glover's Rich Purnell, a brilliant but eccentric young scientist who lives so deep inside his own head that he doesn't know the NASA director's name. One of the best scenes finds Kapoor and communications expert Mindy Park (Mackenzie Davis) interpreting the inflection of Mark's typed response to a radical scheme to rescue him: "Are you f-----g kidding me?" Kapoor hopes that Mark meant to indicate excitement at NASA's audacity, but deep down he knows that's probably not it.

The film's ecstatic peak is its most counter-intuitive sequence, a music montage near the climax that interrupts the flow of the rescue action to show the astronauts on Mark's old spaceship contacting their loved ones via satellite video: a husband shows his wife a record album that he bought for her birthday, and a father delights his kids by floating through the spaceship's interior in zero gravity, swallowing water globules like a porpoise going after minnows. Billions gather to watch the the rescue on live TV at the end, but nowhere else do we get the impression that all other drama has ceased while humanity frets over Mark's fate. For Mark it's life or death, but we infer that there are long stretches when the public has forgotten that he's stranded. The most significant recurring images in the film are closeups of sprigs sprouting from the potatoes that Mark buried in his greenhouse. Life goes on no matter what. 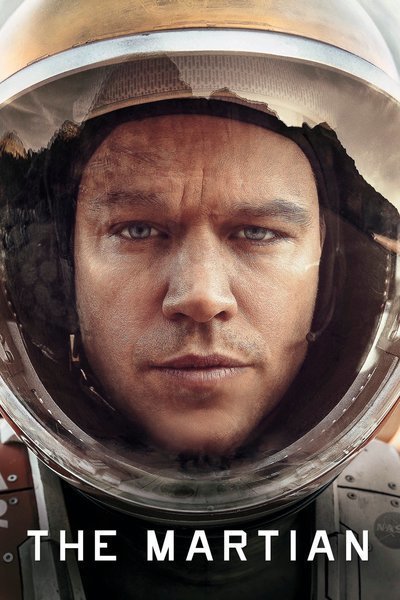