"Annie Hall" contains more intellectual wit and cultural references than any other movie ever to win the Oscar for best picture, and in winning the award in 1977 it edged out "Star Wars," an outcome unthinkable today. The victory marked the beginning of Woody Allen's career as an important filmmaker (his earlier work was funny but slight) and it signaled the end of the 1970s golden age of American movies. With "Star Wars," the age of the blockbuster was upon us, and movies this quirky and idiosyncratic would find themselves shouldered aside by Hollywood's greed for mega-hits. "Annie Hall" grossed about $40 million--less than any other modern best picture winner, and less than the budgets of many of them.

Watching it again, 25 years after its April 1977 premiere, I am astonished by how scene after scene has an instant familiarity. Some of its lines have seeped into the general consciousness; they're known by countless people who never saw the movie, like Jack Nicholson's chicken salad speech from "Five Easy Pieces." For years I've invariably described spiders as being "as big as a Buick," and this movie may be where most people first heard Groucho Marx's comment that he would not want to belong to any club that would have him as a member.

Alvy Singer, the gag writer and stand-up comic played by Allen in the movie, is the template for many of his other roles--neurotic, wisecracking, kvetching, a romantic who is not insecure about sex so much as dubious about all the trouble it takes. Annie Hall, played by Diane Keaton, sets the form for many of Allen's onscreen girlfriends: Pretty, smart, scatterbrained, younger, with affection gradually fading into exasperation. Women put up with a lot in Allen's movies, but at a certain point they draw the line.

Alvy Singer, like so many other Allen characters and Allen himself, accompanies every experience in life with a running commentary. He lives in order to talk about living. And his interior monologues provide not merely the analysis but the alternative. After making love with Annie for the first time, Alvy rolls over, exhausted and depleted, and observes, "As Balzac said, 'There goes another novel'."

Alvy is smarter than the ground rules of Hollywood currently allow. Watching even the more creative recent movies, one becomes aware of a subtle censorship being imposed, in which the characters cannot talk about anything the audience might not be familiar with. This generates characters driven by plot and emotion rather than by ideas; they use catch-phrases rather than witticisms. Consider the famous sequence where Annie and Alvy are standing in line for the movies and the blowhard behind them pontificates loudly about Fellini. When the pest switches over to McLuhan, Alvy loses patience, confronts him, and then triumphantly produces Marshall McLuhan himself from behind a movie poster to inform him, "You know nothing of my work!" This scene would be penciled out today on the presumption that no one in the audience would have heard of Fellini or McLuhan.

"Annie Hall" is built on such dialogue, and centers on conversation and monologue. Because it is just about everyone's favorite Woody Allen movie, because it won the Oscar, because it is a romantic comedy, few viewers probably notice how much of it consists of people talking, simply talking. They walk and talk, sit and talk, go to shrinks, go to lunch, make love and talk, talk to the camera, or launch into inspired monologues like Annie's free-association as she describes her family to Alvy. This speech by Diane Keaton is as close to perfect as such a speech can likely be, climaxing with the memory of her narcoleptic Uncle George falling asleep and dying while waiting in line for a free turkey. It is all done in one take of brilliant brinksmanship, with Keaton (or Annie) right on the edge of losing it.

Because "Annie Hall" moves so quickly, is so fresh and alive, we may not notice how long some of Allen's takes are. He famously likes to shoot most scenes in master shots with all of the actors onscreen all of the time, instead of cutting on every line of dialogue. The critic David Bordwell has an illuminating article in the Spring 2002 issue of Film Quarterly that points out that Allen's average shot length (ASL) ranges high: 22 seconds for "Manhattan" and 35.5 seconds for "Mighty Aphrodite." Bordwell tells me "Annie Hall" has an ASL of 14.5 seconds (he says other 1977 films he clocked had an ASL of from 4 to 7 seconds). By comparison, the recent film "Armageddon" has an ASL of 2.3 seconds, a velocity that arguably makes intelligent dialogue impossible.

Alvy and Annie take a sly delight in their conversational skill; they're attracted to each other not by pheromones but by pacing. In the first conversation they have, after meeting as tennis partners, they fall naturally into verbal tennis:

Alvy: You want a lift?

Alvy: Sure. Which way you goin'?

Alvy: You just said you were going downtown.

This is not merely dialogue, it is a double act in the process of discovering itself. The more we listen to Annie and Alvy talk, the more we doubt they meet many people who can keep up with them. When Alvy expresses reluctance to let Annie move in with him, and she complains that her apartment is too small and has bad plumbing and bugs, who but Alvy could take "bugs" as his cue, and observe, "Entomology is a rapidly growing field." And only Annie could interpret this as, "You don't want me to live with you."

Alvy: I don't want you to live with me!? Whose idea was it?

Alvy: Yeah, it was yours, actually, but I approved it immediately.

There are of course other women in Alvy's life, including the Rolling Stone correspondent (Shelley Duvall) who is a Rosicrucian (Alvy: "I can't get with any religion that advertises in Popular Mechanics"). And the liberal Democrat (Carol Kane) who Alvy marries but later splits up with because of their disagreements about the second gun theory of the Kennedy assassination. That Annie Hall is the great love of his life is immediately clear, and the movie is a flashback from the opening monologue in which he sadly notes that a year earlier they were in love; the movie is his analysis of what went wrong, and his answer is, he found happiness, but couldn't accept it. Groucho's line "is the key joke of my adult life, in terms of my relationships with women."

Lore about "Annie Hall" on imdb.com includes the revealing detail that Diane Keaton, who lived with Allen at the time, was born as Diane Hall, and her nickname was Annie. The movie originally contained a murder subplot, entirely dropped; a 140 minute rough cut became a 95 minute film in a process described in editor Ron Rosenblum's book When the Shooting Stops.

Viewing the final cut, I sensed not only how well the remains hold together but how miraculously, since the parts would seem to be an ungainly fit. Consider Allen's astonishing range of visual tactics, including split screens in which the characters on either side directly address one another; a bedroom scene where Annie's spirit gets up during sex to sit, bored, in a chair by the bed; autobiographical flashbacks; subtitles that reveal what characters are really thinking; children who address us as if they were adults ("I'm into leather"); an animated sequence pairing Alvy with Snow White's wicked witch; and the way Alvy speaks directly out of the screen to the audience.

This is a movie that establishes its tone by constantly switching between tones: The switches reflect the restless mind of the filmmaker, turning away from the apparent subject of a scene to find the angle that reveals the joke. "Annie Hall" is a movie about a man who is always looking for the loopholes in perfection. Who can turn everything into a joke, and wishes he couldn't. 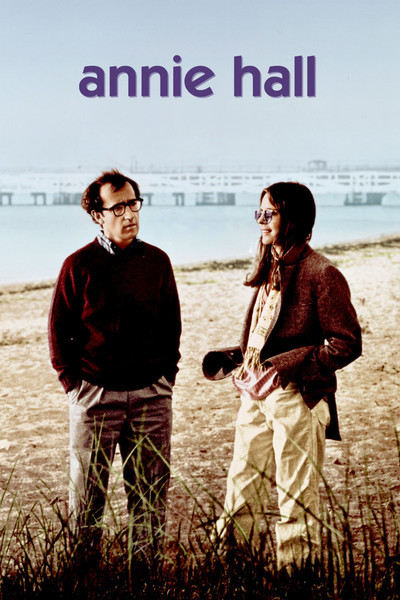