It's a Wonderful Life

The best and worst things that ever happened to "It's a Wonderful Life" are that it fell out of copyright protection and into the shadowy no-man's-land of the public domain. Because the movie is no longer under copyright, any television station that can get its hands on a print of the movie can show it, at no cost, as often as it wants to. And that has led in the last decade to the rediscovery of Frank Capra's once-forgotten film, and its elevation into a Christmas tradition. PBS stations were the first to jump on the bandwagon in the early 1970s, using the saga of the small-town hero George Bailey as counter-programming against expensive network holiday specials. To the general amazement of TV program directors, the audience for the film grew and grew over the years, until now many families make the movie an annual ritual.

That was the best thing that happened to "It's a Wonderful Life," bringing cheer into the lives of director Frank Capra and star James Stewart, who both consider it their favorite film. The worst thing--which has inspired Stewart to testify before a congressional committee and Capra to issue a sickbed plea--is that the movie has been colorized. Movies in the public domain are so defenseless that you could cut one up to make ukulele picks, and who could legally prevent you? And so a garish colorized version--destroying the purity of the classic original black-and-white images--has been seen on cable, is available for local syndication and is sold on cassette.

It is a great irony that the colorized version has been copyrighted, and so many stations are paying a great deal for the rights to an inferior version of a movie that they could show for free in black and white. If I were a local television program director with taste and a love of movies, I would find out when my competitor was going to air his colorized version, and counter-program with the original black-and-white movie, patting myself on the back for a public service. Maybe it could be promoted with a clip of Jimmy Stewart telling Congress, in his inimitable way, "I tried to look at the colorized version, but I had to switch it off--it made me feel sick."

What is remarkable about "It's a Wonderful Life" is how well it holds up over the years; it's one of those ageless movies, like "Casablanca" or "The Third Man," that improves with age. Some movies, even good ones, should only be seen once. When we know how they turn out, they've surrendered their mystery and appeal. Other movies can be viewed an indefinite number of times. Like great music, they improve with familiarity. "It's a Wonderful Life" falls in the second category.

I looked at the movie once again recently, on the splendid video laserdisk edition from the Criterion Collection. The movie works like a strong and fundamental fable, sort of a "Christmas Carol" in reverse: Instead of a mean old man being shown scenes of happiness, we have a hero who plunges into despair.

The hero, of course, is George Bailey (Stewart), a man who never quite makes it out of his quiet birthplace of Bedford Falls. As a young man he dreams of shaking the dust from his shoes and traveling to far-off lands, but one thing and then another keeps him at home -- especially his responsibility to the family savings and loan association, which is the only thing standing between Bedford Falls and the greed of Mr. Potter (Lionel Barrymore), the avaricious local banker.

George marries his high school sweetheart (Donna Reed, in her first starring role), settles down to raise a family, and helps half the poor folks in town buy homes where they can raise their own. Then, when George's absentminded uncle (Thomas Mitchell) misplaces some bank funds during the Christmas season, it looks as if the evil Potter will have his way after all. George loses hope and turns mean (even his face seems to darken, although it's still nice and pink in the colorized version). He despairs, and is standing on a bridge contemplating suicide when an Angel 2nd Class named Clarence (Henry Travers) saves him and shows him what life in Bedford Falls would have been like without him.

Frank Capra never intended "It's a Wonderful Life" to be pigeonholed as a "Christmas picture." This was the first movie he made after returning from service in World War II, and he wanted it to be special--a celebration of the lives and dreams of America's ordinary citizens, who tried the best they could to do the right thing by themselves and their neighbors. After becoming Hollywood's poet of the common man in the 1930s with an extraordinary series of populist parables ("It Happened One Night," "Mr. Deeds Goes to Town," "Mr. Smith Goes to Washington," "You Can't Take It With You"), Capra found the idea for "It's a Wonderful Life" in a story by Philip Van Doren Stern that had been gathering dust on studio shelves.

For Stewart, also recently back in civilian clothes, the movie was a chance to work again with Capra, for whom he had played Mr. Smith. The original trailer for the movie (included on the Criterion disk) played up the love angle between Stewart and Donna Reed and played down the message--but the movie was not a box office hit, and was all but forgotten before the public domain prints began to make their rounds.

"It's a Wonderful Life" is not just a heart-warming "message picture." The conclusion of the film makes such an impact that some of the earlier scenes may be overlooked--such as the slapstick comedy of the high school hop, where the dance floor opens over a swimming pool, and Stewart and Reed accidentally jitterbug right into the water. (This covered pool was not a set but actually existed at Hollywood High School). There's also the drama of George rescuing his younger brother from a fall through the ice, and the scene where Donna Reed loses her bathrobe and Stewart ends up talking to the shrubbery. The telephone scene--where an angry Stewart and Reed find themselves helplessly drawn toward each other--is wonderfully romantically charged. And the darker later passages have an elemental power, as the drunken George Bailey staggers through a town he wants to hate, and then revisits it through the help of a gentle angel. Even the corniest scenes in the movie--those galaxies that wink while the heavens consult on George's fate--work because they are so disarmingly simple. A more sophisticated approach might have seemed labored.

"It's a Wonderful Life" did little for Frank Capra's postwar career, and indeed he never regained the box office magic that he had during the 1930s. Such later films as "State of the Union" (1948) and "Pocketful of Miracles" (1961) have the Capra touch but not the magic, and the director did not make another feature after 1961. But he remained hale and hearty until a stroke slowed him in the late 1980s; and he died in 1991. At a seminar with some film students in the 1970s he was asked if there were still a way to make movies about the kinds of values and ideals found in the Capra films. 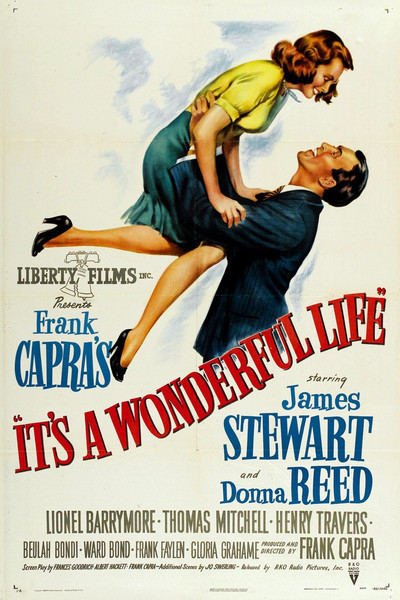