Conscience. That stuff can drive you nuts.

So says Terry Malloy, the longshoreman who testifies against his union in “On the Waterfront.” The line, said by Marlon Brando, resonates all through the picture because the story is about conscience--and so is the story behind the story. This was the film made in 1954 by Elia Kazan after he agreed to testify before the House Un-American Activities Committee, named former associates who were involved with the Communist Party and became a pariah in left-wing circles.

“On the Waterfront” was, among other things, Kazan's justification for his decision to testify. In the film, when a union boss shouts, “You ratted on us, Terry,” the Brando character shouts back: “I'm standing over here now. I was rattin' on myself all those years. I didn't even know it.” That reflects Kazan's belief that communism was an evil that temporarily seduced him, and had to be opposed. Brando's line finds a dramatic echo in A Life, Kazan's 1988 autobiography, where he writes of his feelings after the film won eight Oscars, including best picture, actor, actress and director: “I was tasting vengeance that night and enjoying it. `On the Waterfront' is my own story; every day I worked on that film, I was telling the world where I stood and my critics to go and - - - - themselves.”

In that statement you can feel the passion that was ignited by the HUAC hearings and the defiance of those who named names, or refused to. For some viewers, the buried agenda of “On the Waterfront” tarnishes the picture; the critic Jonathan Rosenbaum told me he could “never forgive” Kazan for using the film to justify himself. But directors make films for all sorts of hidden motives, some noble, some shameful, and at least Kazan was open about his own. And he made a powerful and influential movie, one that continued Brando's immeasurable influence on the general change of tone in American movie acting in the 1950s.

“If there is a better performance by a man in the history of film in America, I don't know what it is,” Kazan writes in his book. If you changed “better” to “more influential,” there would be one other performance you could suggest, and that would be Brando's work in Kazan's “A Streetcar Named Desire” (1951). In those early films, Brando cut through decades of screen mannerisms and provided a fresh, alert, quirky acting style that was not realism so much as a kind of heightened riff on reality. He became famous for his choices of physical gestures during crucial scenes (and as late as “The Godfather,” he was still finding them--the cat in his lap, the spray gun in the tomato patch).

In “On the Waterfront,” there's a moment when Terry goes for a walk in the park with Edie (Eva Marie Saint), the sister of a man who has been thrown off a roof for talking to crime investigators. She drops a glove. He picks it up, and instead of handing it back, he pulls it on over his own workers' hands. A small piece of business on the edge of the shot, but it provides texture.

And look at the famous scene between Terry and his brother, Charley (Rod Steiger), in the back seat of a taxi. This is the “I coulda been a contender” scene, and it has been parodied endlessly (most memorably by Robert De Niro in “Raging Bull”). But it still has its power to make us feel Terry's pain, and even the pain of Charley, who has been forced to pull a gun on his brother. Here is Kazan on Brando:

“ ... what was extraordinary about his performance, I feel, is the contrast of the tough-guy front and the extreme delicacy and gentle cast of his behavior. What other actor, when his brother draws a pistol to force him to do something shameful, would put his hand on the gun and push it away with the gentleness of a caress? Who else could read `Oh, Charley!' in a tone of reproach that is so loving and so melancholy and suggests the terrific depth of pain?”

Kazan's screenplay was by Budd Schulberg, and his producer was Sam Spiegel, one of the great independent buccaneers (his next production after “Waterfront” was “The Bridge on the River Kwai”). Spiegel at first proposed Frank Sinatra for the role of Terry Malloy, and Kazan agreed: “He spoke perfect Hobokenese.” The young, wiry Sinatra would have been well-cast, but then Spiegel decided that Brando, then a much bigger star, could double the budget available for the film. Kazan had already discussed costumes with Sinatra and felt bad about the switch, but Sinatra “let me off easy.”

The film was based on the true story of a longshoreman who tried to overthrow a corrupt union. In life, he failed; in the film, he succeeds, and today the ending of “On the Waterfront” feels too stagy and upbeat. The film was shot on location in Hoboken, N.J., on and near the docks, with real longshoremen playing themselves as extras (sometimes they're moved around in groups that look artificially blocked). Brando plays a young ex-prizefighter, now a longshoreman given easy jobs because Charley is the right-hand man of the corrupt boss, Johnny Friendly (Lee J. Cobb). After he unwittingly allows himself to be used to set up the death of Edie's brother, he starts to question the basic assumptions of his life--including his loyalty to Charley and Johnny, who after all ordered him to take a dive in his big fight in Madison Square Garden.

The other major character is a priest (Karl Malden), who tries to encourage longshoremen to testify against corruption. After one rebel is deliberately crushed in the hold of a ship, the priest makes a speech over his body (“if you don't think Christ is down here on the waterfront, you got another think coming”). It would have been the high point of another kind of film, but against Brando's more sinuous acting, it feels like a set piece.

Eva Marie Saint makes a perfect foil for Brando, and the two actors have a famous scene in a bar where he reveals, almost indirectly, that he likes her, and she turns the conversation from romance to conscience. At one point Kazan and his cameraman, Boris Kaufman, frame her pale face and hair in the upper-right-hand corner of the screen, with Brando in lower center, as if a guardian angel is hovering above him.

The best scenes are the most direct ones. Consider the way Brando refuses to cooperate with investigators who seek him out on the docks, early in the film. And the way he walks around on the rooftop where he keeps his beloved pigeons--lithe and catlike. Steiger is invaluable to the film, and in the famous taxi conversation, he brings a gentleness to match Brando's: The two brothers are in mourning for the lost love between them.

Schulberg's screenplay straddles two styles--the emerging realism and the stylized gangster picture. To the latter tradition belong lines like “He could sing, but he couldn't fly,” when the squealer is thrown off the roof.

To the former: “You know how the union works? You go to a meeting, you make a motion, the lights go out, then you go out.” Brando's “contender” speech is so famous it's hard to see anew, but watch the film again and you feel the reality of the sadness between the two men, and the simple words that express it.

“On the Waterfront” was nominated for 11 Oscars and won eight. Ironically, the other three nominations were all for best supporting actor, where Cobb, Malden and Steiger split the vote. Today the story no longer seems as fresh; both the fight against corruption and the romance fall well within ancient movie conventions. But the acting and the best dialogue passages have an impact that has not dimmed; it is still possible to feel the power of the film and of Brando and Kazan, who changed American movie acting forever. 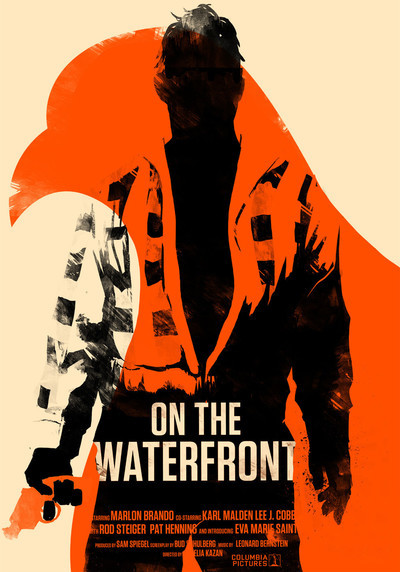