"What kind of town is this?” Wyatt Earp asks on his first night in Tombstone. “A man can't get a shave without gettin' his head blowed off.” He gets up out of the newfangled barber's chair at the Bon Ton Tonsorial Parlor and climbs through the second-story window of a saloon, his face still half lathered, to konk a gun-toting drunk on the head and drag him out by the heels.

Earp (Henry Fonda) already knows what kind of town it is. In the opening scenes of John Ford's greatest Western, “My Darling Clementine” (1946), he and his brothers are driving cattle east to Kansas. Wyatt, Virgil and Morgan leave their kid brother James in charge of the herd and go into town for a shave and a beer. As they ride down the main street of Tombstone, under a vast and lowering evening sky, gunshots and raucous laughter are heard in the saloons, and we don't have to ask why the town has the biggest graveyard west of the Rockies.

Ford's story reenacts the central morality play of the Western. Wyatt Earp becomes the town's new marshal, there's a showdown between law and anarchy, the law wins and the last shot features the new schoolmarm--who represents the arrival of civilization. Most Westerns put the emphasis on the showdown. “My Darling Clementine” builds up to the legendary gunfight at the OK Corral, but it is more about everyday things--haircuts, romance, friendship, poker and illness.

At the center is Henry Fonda's performance as Wyatt Earp. He's usually shown as a man of action, but Fonda makes him the new-style Westerner, who stands up when a woman comes into the room and knows how to carve a chicken and dance a reel. Like a teenager, he sits in a chair on the veranda of his office, tilts back to balance on the back legs and pushes off against a post with one boot and then the other. He's thinking of Clementine, and Fonda shows his happiness with body language.

Earp has accepted the marshal's badge because when he and his brothers returned to their herd, they found the cattle rustled and James dead. There is every reason to believe the crime was committed by Old Man Clanton (Walter Brennan) and his “boys” (grown, bearded and mean). An early scene ends with Clanton baring his teeth like an animal showing its fangs. Earp buries James in a touching scene. (“You didn't get much of a chance, did you, James?”) Then, instead of riding into town and shooting the Clantons, he tells the mayor he'll become the new marshal. He wants revenge, but legally.

The most important relationship is between Earp and Doc Holliday (Victor Mature), the gambler who runs Tombstone but is dying of tuberculosis. They are natural enemies, but a quiet, unspoken regard grows up between the two men, maybe because Earp senses the sadness at Holliday's core. Holliday's rented room has his medical diploma on the wall and his doctor's bag beneath it, but he doesn't practice anymore. Something went wrong back East, and now he gambles for a living, and drinks himself into oblivion. His lover is a prostitute, Chihuahua (Linda Darnell), and he talks about leaving for Mexico with her. But as he coughs up blood, he knows what his prognosis is.

The marshal's first showdown with Holliday is a classic Ford scene. The saloon grows quiet when Doc walks in, and the bar clears when he walks up to it. He tells Earp, “Draw!” Earp says he can't--doesn't have a gun. Doc calls for a gun, and a man down the bar slides him one. Earp looks at the gun, and says, “Brother Morg's gun. The other one, the good-lookin' fellow--that's my brother, Virg.” Doc registers this information and returns his own gun to its holster. He realizes Earp's brothers have the drop on him. “Howdy,” says Doc. “Have a drink.”

Twice Doc tells someone to get out of town, and twice Earp reminds him that's the marshal's job. Although the Clantons are the first order of business, Doc and Earp seem headed for a showdown. Yet they have a scene together that is one of the strangest and most beautiful in all of John Ford's work. A British actor (Alan Mowbray) has come to town to put on a play, and when he doesn't show up at the theater, Earp and Holliday find him in the saloon, on top of a table, being tormented by the Clantons. The actor begins Hamlet's famous soliloquy, but is too drunk and frightened to continue. Doc Holliday, from memory, completes the speech, and could be speaking of himself: “ ... but that the dread of something after death, the undiscovered country from whose bourn no traveler returns, puzzles the will ... .”

The gentlest moments in the movie involve Earp's feelings for Clementine (Cathy Downs), who arrives on the stage from the East, looking for “Dr. John Holliday.” She is the girl Doc left behind. Earp, sitting outside the hotel, rises quickly to his feet as she gets out of the stage, and his movements show that he's in awe of this graceful vision. Clementine has been seeking Doc all over the West, we learn, and wants to bring him home. Doc tells her to get out of town. And Chihuahua monitors the situation jealously.

Clementine is packed to go the next morning when the marshal, awkward and shy, asks her to join him at the church service and dance. They walk in stately procession down the covered boardwalk, while Ford's favorite hymn plays: “Shall We Gather at the River?” When the fiddler strikes up, Wyatt and Clementine dance--he clumsy but enthusiastic, and with great joy. This dance is the turning point of the movie, and marks the end of the Old West. There are still shots to be fired, but civilization has arrived.

The legendary gunfight at the OK Corral has been the subject of many films, including “Frontier Marshal” (1939), “Gunfight at the O.K. Corral” (1957), “Tombstone” (1993, with Val Kilmer's brilliant performance as Doc) and “Wyatt Earp” (1994). Usually the gunfight is the centerpiece of the film. Here it plays more like the dispatch of unfinished business; Ford doesn't linger over the violence.

There is the quiet tenseness in the marshal's office as Earp prepares to face the Clantons, who've shouted their challenge that they'd be waiting for him at the corral. Earp's brothers are with him, because this is “family business.” Earp turns down other volunteers, but when Doc turns up, he lets him take part, because Doc has family business, too (one of the Clanton boys has killed Chihuahua). Under the merciless clear sky of a desert dawn, in silence except for far-off horse whinnies and dog barks, the men walk down the street and take care of business.

John Ford (1895-1973) was, many believe, the greatest of all American directors. Certainly he did more than any other to document the passages of American history. For him, a Western was not quite such a “period film” as it would be for later directors. He shot on location in the desert and prairie, his cast and crew living as if they were on a cattle drive, eating out of the chuckwagon, sleeping in tents. He filmed “My Darling Clementine” in his beloved Monument Valley, on the Arizona-Utah border.

He made dozens of silent Westerns, met the real Wyatt Earp on the set of a movie and heard the story of the OK Corral directly from him (even so, history tells a story much different from this film). Ford worked repeatedly with the same actors (his “stock company”) and it is interesting that he chose Fonda rather than John Wayne, his other favorite, for Wyatt Earp. Maybe he saw Wayne as the embodiment of the Old West, and the gentler Fonda as one of the new men who would tame the wilderness.

“My Darling Clementine” must be one of the sweetest and most good-hearted of all Westerns. The giveaway is the title, which is not about Wyatt or Doc or the gunfight, but about Clementine, certainly the most important thing to happen to Marshal Earp during the story. There is a moment, soon after she arrives, when Earp gets a haircut and a quick spray of perfume at the Bon Ton Tonsorial Parlor. Clem stands close to him and says she loves “the scent of the desert flowers.” “That's me,” says Earp. “Barber.” 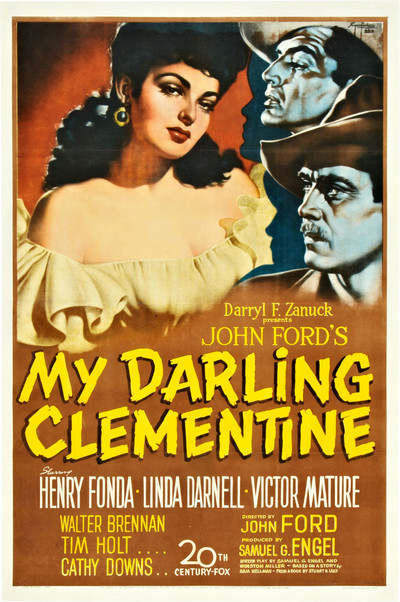