Raiders of the Lost Ark

Steven Spielberg's "Raiders of the Lost Ark" plays like an anthology of the best parts from all the Saturday matinee serials ever made. It takes place in Africa, Nepal, Egypt, at sea and in a secret submarine base. It contains trucks, bulldozers, tanks, motorcycles, ships, subs, Pan Am Clippers, and a Nazi flying wing. It has snakes, spiders, booby traps and explosives. The hero is trapped in a snake pit, and the heroine finds herself assaulted by mummies. The weapons range from revolvers and machineguns to machetes and whips. And there is the supernatural, too, as the Ark of the Covenant triggers an eerie heavenly fire that bolts through the bodies of the Nazis.

The Saturday serial aspects of "Raiders of the Lost Ark" have been much commented on, and relished. But I haven't seen much discussion of the movie's other driving theme, Spielberg's feelings about the Nazis. "Impersonal," critic Pauline Kael called the film, and indeed it is primarily a technical exercise, with personalities so shallow they're like a dew that has settled on the characters. But Spielberg is not trying here for human insights and emotional complexity; he finds those in other films, but in "Raiders" he wants to do two things: make a great entertainment, and stick it to the Nazis.

We know how deeply he feels about the Holocaust. We have seen "Schindler's List" and we know about his Shoah Project. Those are works of a thoughtful adult. "Raiders of the Lost Ark" is the work of Spielberg's recaptured adolescence, I think; it contains the kind of stuff teenage boys like, and it also perhaps contains the daydreams of a young Jewish kid who imagines blowing up Nazis real good. The screenplay is by Lawrence Kasdan, based on a story by Philip Kaufman, George Lucas and an uncredited Spielberg, whose movie is great fun on the surface -- one of the classic entertainments -- and then has a buried level.

Consider. The plot hinges on Hitler's desire to recapture the long-lost ark. "Hitler's a nut on the subject," Indiana Jones (Harrison Ford) is told by a government recruiter. "Crazy. He's obsessed with the occult." But not just anything occult. The ark, if found, would be the most precious Jewish artifact imaginable -- the chest that held the Ten Commandments that God gave Moses on the mountain top. "An army which carries the ark before it is invincible," Indy says; Hitler wants to steal the heritage of the Jews and use it for his own victory.

Throughout the film, there is a parade of anti-Nazi symbolism and sly religious satire, as when a desperate Indy grabs the hood ornament of a Mercedes truck, and it snaps off. And when a Nazi torturer grabs a sacred relic and it burns a stigmata into his hand. When the ark is being transported in the hold of a Nazi ship, inside a stout lumber crate, the swastika and other Nazi markings spontaneously catch fire and are obliterated. A Nazi officer, uneasy about opening the ark, says: "I am uncomfortable with the thought of this Jewish ritual." And of course when the spirit of the ark manifests itself, it's as a writhing column of fire that skewers the Nazis. ("Keep your eyes closed," Indy desperately tells his sidekick, although one assumes the holy fire would know friend from foe.) There is even a quiet in-joke in the character of Belloq (Paul Freeman), the Frenchman who tries to play both sides against the middle, just as Occupied France did.

Nazis were favorite villains of Saturday serials, prized more for their costumes and accents than for their evil beliefs. Spielberg here makes manifest their values, and then destroys them: "Raiders of the Lost Ark" has all the qualities of an exuberant serial, plus a religious and political agenda. That Spielberg places his message in the crevices of the action makes it all the more effective. "Raiders" may have an impersonal superstructure, but its foundations are personal, and passionate.

I make these points to place it more firmly in the mainstream of Spielberg's work, since "Raiders" is widely enjoyed but just as widely dismissed as something Spielberg tossed off between more important films. It comes between "Close Encounters of the Third Kind" and "E.T.: The Extra-Terrestrial," films Kael compared to "a boy soprano singing with joy." That voice couldn't be heard in "Raiders," she felt. I think I can hear it: not singing, but laughing, sometimes with glee, sometimes in triumph.

The movie is just plain fun. The Kasdan screenplay is a construction of one damn thing on top of another. As the movie opens, Indy brushes aside a web taller than a man, is assaulted by giant spiders, narrowly eludes a booby trap and then another, leaps across a bottomless pit, is nearly crushed by a lowering slab, is betrayed by his companion, leaps the pit again, is pursued by a gigantic boulder that rolls behind him, is surrounded by natives with spears and dart guns, leaps into a river, crawls into an airplane and finds a giant snake in the cockpit. "I hate snakes," he says.

The movie hurtles from one crisis to another. After the struggle for control of the flying wing, for example (after, that is, a fist fight, gunshots, gasoline explosions and a villain who is made mincemeat by a propeller), Indy is abruptly told, "The Ark! They're taking it on a truck to Cairo!" Indy replies, "Where is it?" And that's all the exposition necessary to get us from the flying wing scene to the famous truck chase.

Harrison Ford is the embodiment of Indiana Jones -- dry, fearless, and as indestructible as a cartoon coyote. The correct casting was not as obvious in 1980, when the film was being prepared, as it is now. He had starred in "Star Wars" and "The Empire Strikes Back" as Han Solo, a laconic man of action, but his other credits were a mixed bag. What he proved in the "Star Wars" movies, and went on to prove again and again, is that he can supply the strong, sturdy center for action nonsense. In a scene where everything is happening at once, he knows that nothing unnecessary need be happening on his face, in his voice, or to his character. He is the fulcrum, not the lever.

Karen Allen plays Marian, his sidekick, a gutsy broad who has the duty of following the hero from one side of the globe to the other, while in constant danger. (She is nearly burned alive twice, shot at, faces down a King Cobra and is left tied to a stake by Indy because "If I take you out of here they'll start combing the place for us.") The female lead in an Indiana Jones movie is sort of an honorary boy, no more sexual than the girls in boys' adventure magazines, although Marian can more than take care of herself and is not helpless in the face of danger.

The special effects, astonishing at the time, now look a little cheesy; accustomed to digital perfection, we can see when model planes are being used, when dark clouds are being put in the sky by an optical printer, when the deadly rays of the ark are being superimposed on the action. Lucas of course went back and tidied up the effects in "Star Wars," but I hope Spielberg never touches "Raiders" because the effects, just as they are, help set the tone of the movie. A serial should look a little hasty. It's a Boy's Own Adventure, a whiz-bang slamarama, a Bruised Forearm movie (you squeeze the arm of your date every time something startles you). It's done with a kind of heedless joy. Spielberg was old enough (34) to have the clout to make the film, and young enough to remember why he wanted to. All of the reasons why he wanted to. 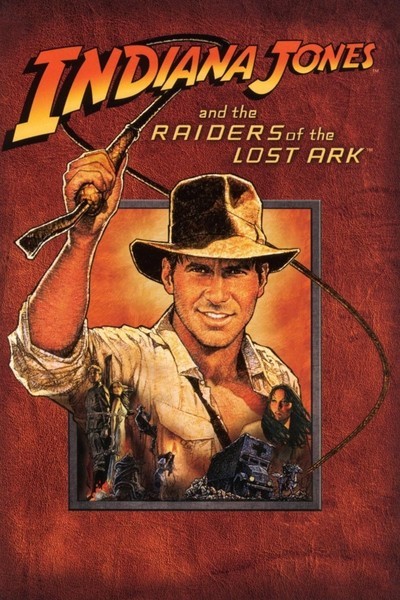