Who would have guessed that, 50 years later, Bonnie and Clyde would end up stealing the show?

Up until the very last award on Sunday night that arrived past midnight, the 89th edition of the Academy Awards was running fairly smoothly with host Jimmy Kimmel proving to be nearly as congenial as Ellen DeGeneres was in her second go-round as emcee in 2014. Certainly, the ABC late-night star was more relaxed and less scathing than previous host Chris Rock when #OscarsSoWhite was THE hot topic of the evening and the criticism was aimed at the attendees.

This year, the show was overflowing with diversity and not just because the acting categories all featured nominees of color after two years of all white contenders. Those in charge also made sure that presenters represented an array of backgrounds, including Gael Garcia Bernal (who, as a Mexican, declared himself to be “a migrant worker” and decried the need for Trump’s border wall), Salma Hayek, John Cho, David Oyelowo, Samuel L. Jackson, Dwayne Johnson and Halle Berry.

Meanwhile, Kimmel made the expected political jabs that have become de rigueur at post-election awards shows, but they were delivered more as humorous punchlines than angry punches. A typical joke had him observing, “I want to say thank you to President Trump. Remember last year when it seemed like the Oscars were racist? That’s gone, thanks to him.” He also took aim at the “mediocre” and “overrated” Meryl Streep, referring to the tweeter-in-chief’s online criticism of the 20-time Oscar nominee after she gave him a bashing during her Golden Globes acceptance speech. Later, Kimmel directly tweeted @realDonaldTrump’s account by sending him the messages “U up?” and “#Merylsayshi.”

Two other Kimmel digs hit pay dirt with the crowd. First up: “This is being watched live by millions of people in 225 countries that now hate us.” And later: “‘Doctor Strange’ was nominated for special effects … and also Secretary of Housing and Urban Development.”

Now for what will likely be considered the worst on-air mistake in Oscar history. Yes, “La La Land”—the top contender with 14 nominations—had to wait a nerve-wracking two-and-a-half-hours before claiming its first award for cinematography. But after that, the trophies came at a steady pace for the candy-colored musical set in the world of showbiz: production design, score, song for “City of Stars,” Emma Stone for lead actress and Damien Chazelle for director.

But then came the much-touted reunion of Warren Beatty and Faye Dunaway who played the Depression-era bank robbers in “Bonnie and Clyde,” the Best Picture nominee from 1967. They presented the final category and Dunaway read off the name of the Best Picture winner: “La La Land.” At least, she thought she did. But as the film’s producers and cast gathered to give thanks and celebrate, there suddenly was an outburst of confusion on stage. It seems that Beatty was given an envelope that said “La La Land,” but it was for Stone’s win, not Best Picture. Meanwhile, “Moonlight,” about a fatherless boy’s struggles with his identity while growing up in the Miami projects, was the actual recipient.

This is the kind of last-act twist that would be too far-fetched for most Hollywood screenwriters to even consider. But for anyone who relishes such Oscar lore, this is the sort of historic flub that just made a better-than-average telecast go right through the roof when it comes to memorable Academy moments. 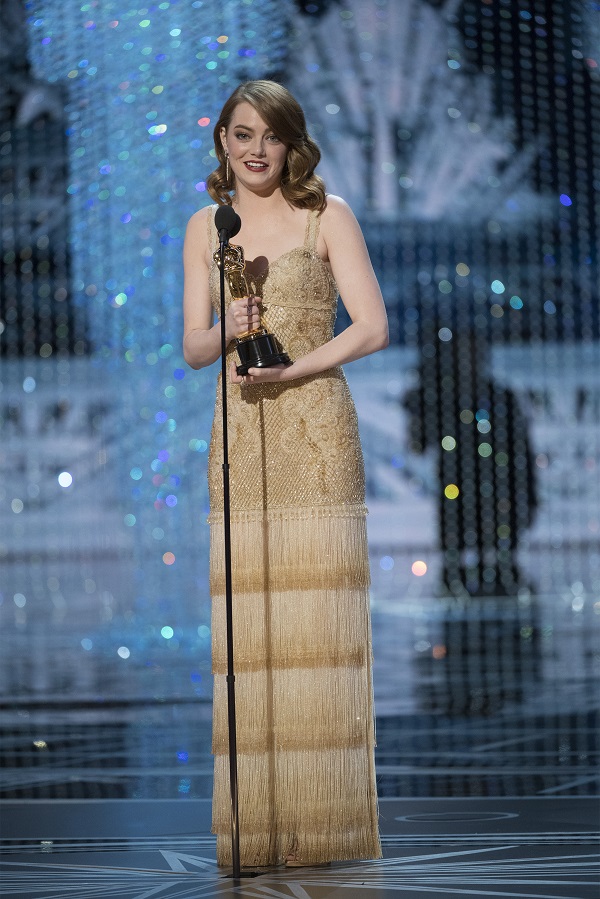 There were other legit surprises throughout the evening. Even costume designer Colleen Atwood admitted she was shocked to hear her name called out as the winner for her wardrobe for the Harry Potter spinoff “Fantastic Beasts and Where to Find Them”—her fourth win—when “La La Land” and “Jackie” were more favored. And while “Suicide Squad” was slammed by critics, voters honored its makeup and hairstyling over expected winner “Star Trek Beyond.” Politics likely played a part in “Toni Erdmann,” the much-admired German film, losing to Iran’s “The Salesman” in the foreign-language category. Director Asghar Farhadi, whose 2011 drama “The Separation” won previously, opted not to attend the ceremony in protest of President Trump’s travel ban. Instead, he recruited Iranian-American engineer Anousheh Ansari to read his speech.

“Dividing the world into ‘us and our enemies’ categories creates fear, a deceitful justification for aggression and war,” he wrote. “These wars prevent democracy and human rights in countries which have themselves been victims of aggression.” Another surprise winner that might have benefited from the uproar over the travel ban was the winning documentary short “The White Helmets,” about volunteer rescue workers in war-torn Syria. The film’s cinematographer Khaled Khatib was expected to attend the Oscars, but was refused permission to travel to the U.S.

And while some of us pundits (including me) fell for the ruse that Denzel Washington’s Screen Actors Guild win as a lead actor in “Fences” put him ahead of onetime frontrunner Casey Affleck in “Manchester by the Sea,” the Oscar voters went for the younger performer’s quietly tortured turn as a grieving janitor instead of his competition’s vocally driven performance as a Pittsburgh garbage man.

As expected, Viola Davis claimed her much-deserved Oscar on the third attempt as a supporting actress for “Fences.” And without even trying, Mahershala Ali was able to show Trump what-for just by becoming the first Muslim actor to win an Academy Award for his supporting role in “Moonlight.” 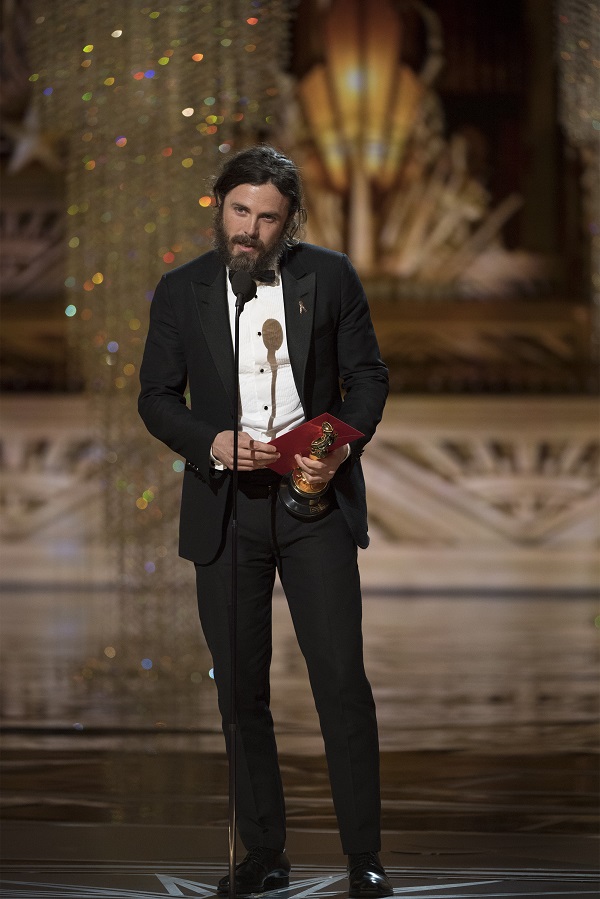 Thank goodness, show-wise, most everything else went right this year. The powers that be led by first-time Oscar producers Michael De Luca and Jennifer Todd wisely started the show on an infectiously upbeat note as master showman Justin Timberlake worked his usual polished song-and-dance magic to “Can’t Stop This Feeling," his nominated ditty from the animated film “Trolls.”

When DeGeneres decided to have pizza delivered mid-show, it became apparent that even movie stars perk up when there is free food to be had. Last year, Chris Rock’s attempt at having Girl Scouts sell their boxes of cookies to the crowd fell a bit flat. But everyone acted like kids at a birthday party when Junior Mints and Red Vines parachuted down from the ceiling, followed by Lemonheads and Mike and Ike—a delivery announced by “Lion’s” adorable pint-size star Sunny Pawar as Kimmel held him high like Simba in “The Lion King.” The candy was then upstaged by a drop of doughnuts and cookies. A starving Taraji P. Henson looked as if she was threatening to snatch away her “Hidden Figures” co-star Octavia Spencer’s baked goods. And you ain’t seen nothing until you watch Streep nibble a chocolate confection handed to her by loving husband Don Gummer.

Other bits that kept the attendees happy and made for great TV was the unsuspecting tour bus riders who supposedly had no idea they were being left off at the ongoing Oscar ceremony. As a result, Gary and Vicky, an engaged couple from Chicago, are the new Ken Bone. Not only did they and others get to hug Streep and stroke Ali's newly won Oscar as they made their way in front of the stage, Kimmel encouraged Washington to “marry” the pair on camera and damn if he didn’t go through with it. To top it off, Kimmel convinced Jennifer Aniston to give Vicky her sunglasses as a wedding gift.

As for the host’s long-running faux feud with Matt Damon, a little goes a long way, even if it was amusing when he caused the orchestra to drown out Damon’s attempt to present an award. And it was surprisingly moving and a good way to cut down on awkwardly matched presenters to pair younger actors with their elders who most inspired them onscreen. As a result, Charlize Theron picked Shirley MacLaine for “The Apartment,” Seth Rogen went with Michael J. Fox for “Back to the Future,” and, somewhat surprisingly, Javier Bardem decided on Streep for “The Bridges of Madison County.”

Too bad that “La La Land” did not get the chance to be the first musical to win Best Picture since 2002’s “Chicago.” Maybe the last-minute rush of negative think pieces did it in. But its makers can take solace in the fact that it has taken in nearly $350 million in ticket sales worldwide. Meanwhile, I can’t stop the feeling that in some way “Moonlight”—which also won adapted screenplay—is much more emblematic about what is right and wrong with our world right now. And with its worldwide gross of just $25 million so far, it needs and deserves all the exposure it can get.

BEST DOCUMENTARY: "OJ: Made in America"

BEST COSTUME DESIGN: "Fantastic Beasts and Where to Find Them"