There are a fair number of well-regarded films about the link between a father and a young daughter: “A Tree Grows in Brooklyn,” “To Kill a Mockingbird,” “Paper Moon,” “My Girl,” “Fly Away Home,” “Eve’s Bayou” and ”Beasts of the Southern Wild,” to name a few.

But rarer is the memorable movie that portrays a dad and his adult daughter: “On Golden Pond,” both versions of “Father of the Bride,” “Coyote Ugly,” maybe “Chinatown” and “Taken” if you stretch matters a bit. That’s about all that immediately come to mind. I am no Freud, either Sigmund or Anna, but my guess is there exists something more complex, if distancing, about the older male parent-grown female child dynamic that perhaps makes it difficult to successfully translate onscreen.

Not for Maren Ade, the abundantly talented writer and director of “Toni Erdmann,” Germany’s official submission for a foreign language film Oscar. She fully embraces the inherent awkwardness of a testy emotional bond and tackles it to the ground, all the while mining it for heartfelt humor without the all-too-common safety net of predictability found in big-budget Hollywood fare.

There are several advantages that Ade has at her disposal, in addition to her gender and having a father, which greatly benefit this deceptively shaggy though expertly assembled ramble about generational conflict and caring. The plot sounds simple enough: Winfried (Peter Simonischek), a lonely senior divorced father prone to pulling childish pranks and assuming invented personas, decides to stalk Ines (Sandra Hüller), his career-obsessed 30-something consultant daughter, in Bucharest as she tries to pull off an important contract extension with an oil company. But there is so much more going on than just that.

One of the several attributes that elevates “Toni Erdmann,” named after Winfried’s most frequent persona, is how believably the actors sink themselves into their roles. Few moviegoers in this country—including me—probably have seen either lead before and therefore they appear here baggage-free. Also, Ade has been allowed to make a relationship comedy that runs for an epic-sized 162 minutes. That gives the characters abundant breathing room to slowly yet steadily evolve before our eyes. It also provides the action a chance to percolate to a point around the two-hour mark where audiences will find themselves in a state of constant surprise. Much has been written about the climactic brunch sequence and how Ines performs an aggressively committed rendition of a pop music classic, but it’s better to discover these laugh-igniting highlights for yourself while sitting in a crowd.

However, my two viewings of the film did provide a slightly different and deeper appreciation. At first, I was more intent on the clash of personalities. Winfried is a kind of Teutonic Baloo the Bear in human form who treats life as a role-playing lark. He also feels the need to save his daughter from herself by showing her that there is more beyond just sealing the deal. Ines, meanwhile, is constantly struggling to prove herself on the job against a phalanx of male colleagues who regularly second-guess and underestimate her. Ade, to her credit, doesn’t simply coat her with an ice queen veneer although Ines does have her flaws. She can’t summon much empathy for those employees who would be laid off if her efficiency plan that involves outsourcing is put in place. She also is a control freak who can’t simply let go and enjoy herself, as shown in a scene when she stomps out of an unsatisfactory massage session, or seeks brief relief through drink, drug use and an odd sexual interlude.

But her saving grace is how Ines mostly tolerates her goofy pop as best she can while he mingles among her colleagues and says and does ridiculous things—such as renting a Hummer limo for himself or posing as an ambassador from Germany. He knows how to get under her skin, like when he tells others that he has had to hire a substitute daughter. She, on the other hand, wishes her father would make better use of his time as she sternly snaps, “Do you have any plans in life other than slipping fart cushions under people?” He denies he has a fart cushion. But, by this point, we know he will soon acquire one.

The second time around with "Toni Erdmann," however, I looked at both Winfried and Ines a different way and came to the conclusion that she is definitely her father’s daughter. If he is always pretending to be someone else, as if in a perpetual one-man show, Ines is also an impersonator in many cases, such as when she must feign interest in shopping with a client’s wife. He wears a ratty wig, a garish suit and silly false teeth. She, on the other hand, costumes herself in minimalist office attire and rehearses a presentation as if she were putting on a play. The sad thing is, the people she hopes to impress are more taken by her father, despite his silly idiosyncrasies, than they are by her. It is partly sexism, but also because Ines doesn’t believe in herself and Winfried couldn’t care less what anyone thinks except for her.

There isn’t exactly a happy ending, but there is a satisfying one thanks to a sweet-sad scene near the end that suggests that Ines has learned to at least appreciate her father’s “make ‘em laugh” point of view of the world. And that, in this case, is progress. 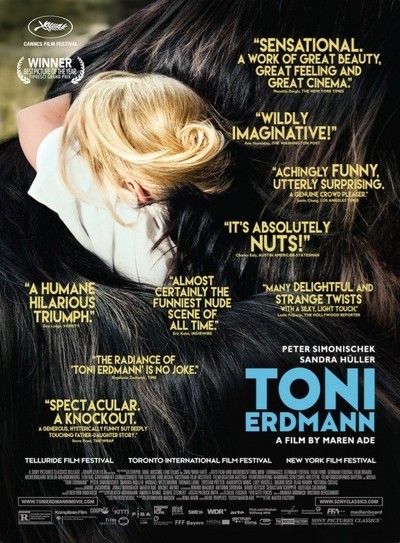