Every payday, garbage collector Troy Maxson (Denzel Washington) holds court in the backyard of the Pittsburgh home he shares with his wife, Rose (Viola Davis) and their son, Cory (Jovan Adepo). By Troy’s side are his two best friends, Bono (Stephen Henderson), the co-worker he’s known for decades, and a bottle of gin, which Troy has also known for decades. Both are very good listeners, and there’s nothing Troy enjoys more than a captive audience. When his tales spin too wildly into fiction—at one point, Troy reminisces about wrestling with Death itself—Rose steps outside to playfully call him on his nonsense. Troy cuddles with her, tossing the raunchiest dialogue he has to offer in her direction. As the evening progresses, Troy is sometimes joined by his eldest son, Lyons (Russell Hornsby), who borrows money, or his disabled war veteran brother, Gabe (Mykelti Williamson), who has just moved from Troy’s home in a defiant display of his independence. Life is a series of routines culminating in death. Every payday brings Troy Maxson closer to his wrestling partner.

This repeated scenario forms the basis of August Wilson’s Pulitzer Prize-winning play, “Fences.” 29 years after its Broadway premiere, “Fences” arrives in theaters courtesy of a screenplay by the late playwright himself. With two Pulitzer Prizes and his ten-play magnum opus, “The Pittsburgh Cycle,” (of which “Fences” is the sixth work), Wilson takes his rightful place alongside Eugene O’Neill, Edward Albee and Tennessee Williams as one of the greatest American playwrights. The focus of Wilson’s cycle is African-American life across the entire 20th century, with each play taking place in a particular decade. “Fences” is set in the 1950’s, but the timeframe does not date the material. Its universal themes supersede any of its societal details, though based on this year’s election cycle, viewers may be stunned to discover that the American working class is more than just Midwestern and White.

Wilson’s plays are rich, poetic, wordy affairs tinged with music, the magical nature of myth, and symbolic elements that work extremely well as live theater. Since theater is an intimate medium, the general consensus on translating plays to screen is to “open up” the play, which quite often destroys the natural fabric of the work. The masterful thing about Denzel Washington’s direction here is that he doesn’t exactly open up the play. Instead, he opens up the visual frame around the players. He and cinematographer Charlotte Bruus Christensen use the entire screen to occasionally dwarf the characters inside the backyard setting where much of the film takes place. At other times, tight framing gives an air of claustrophobia that’s almost suffocating. Throughout, there’s clear evidence that careful thought has been put into the quiet visual architecture of this film; there are several visual motifs that support the themes in Wilson’s words, and not once does a character seem to be in the wrong spot. For example, a scene between Bono and Troy, where Bono warns Troy of impending ruination, places the actors in the bottom right of the frame while rubble and an empty field symbolically take up most of the screen.

Most importantly, Washington as director knows that the biggest star in this film is its writing. When a film has actors this committed to speaking their lines, to the point where it seems they are turning themselves inside out with anguish, the camera is always exactly where it needs to be—it is with them, listening as intently as we in the audience are. This type of direction is a lost art nowadays, evoking a prior time when masters like Billy Wilder and Sidney Lumet plied their trades. In fact, it was Wilder who eschewed the notion that ostentatious, flashy direction was what made for great drama, saying that if “something were said to be well-directed, that is proof that it is not.” Washington understands this, and “Fences” is much more powerful for his devotion to his actors’ craft. When Viola Davis is showing you how hard her heart is breaking, the camera doesn’t need to be competing for your attention.

“Fences” imports most of the cast of its Tony-winning 2010 revival (which I have seen). In addition to Washington and Davis, who won Tonys for lead acting, Henderson, Hornby and Williamson also reprise their roles. Their familiarity with the characters translates into a slew of excellent performances. Williamson has the trickiest role: his war-damaged Gabriel is the play’s most theatric and symbolic character. A man with a metal plate in his head, whose government disability check allowed Troy to buy his house, Gabriel thinks he’s the messenger of God described as a trumpet player in many Negro spirituals. Williamson humanizes this character by playing his delusions without mockery. He believes in his convictions, and as the last scene of the film indicates, he might not be wrong.

Wilson’s common theme of legacy fuels “Fences” in the guise of Troy’s relationship with Cory. Cory has the opportunity to get a college scholarship for his football skills, but Troy is against this primarily because of his own failed sports dreams. Troy was a great baseball player in the Negro Leagues, but this was well before Jackie Robinson (whom Troy despises), so Troy never realized his dreams of major league glory. It’s not lost on us that Troy is denied success in what is commonly called “America’s Pastime”; baseball serves as the perfect metaphor for the American Dream. Like the America of Troy’s time, it was segregated and demanded that Blacks knew their place. For most fathers, knowing their son wishes to follow in his footsteps would be a happy occasion, especially in sports and even more so if one’s legacy might be extended or surpassed. Yet Troy’s brutal pig-headedness drives an irredeemable wedge between the two. In his big confrontation scene, newcomer Adepo goes toe-to-toe with his scene-stealing director and almost upstages him.

As Troy, Washington has a role tailor-made for all his “Denzel”-isms. Whereas Troy’s brilliant originator, James Earl Jones, kept an open vein of terror flowing through his performance, Washington smothers his dark side with a charm that’s as sticky as flypaper. He makes it easy to see why Rose would fall for him—and stay with him besides the obvious reason that society demanded a woman have a husband. “Fences” gives Troy mountains of dialogue to climb, and the fast-talking Washington leaps over it, catering it to his familiar manner of speaking. Troy’s use of the N-word is particularly of interest. That Troy would say the word is not surprising for the timeframe, but Washington spins it differently depending on the recipient. With Bono, it’s a term of endearment, which Bono returns just as easily. But in the famous speech that takes up Act 1, Scene 3, when Troy levels it at Cory (“N--ger, as long as you in my house, you put a 'Sir' on the end of it when you talk to me"), he hurls it with the fury of a klansman.

Not to be outdone, Viola Davis brings her own arsenal of tricks. Nobody cries onscreen like Davis, and if that clip in the trailer affected you, you should be advised that the actual scene is a lot longer and even more devastating. It’s so painful, it’s almost unwatchable. In fact, anyone who had a strict taskmaster as a parent will find parts of “Fences” unendurable. But Davis’ Rose is the film’s barometer, measuring how much we can put up with Troy. She loves him, and she does much to soften his rough edges even when she’s pointing out how wrong he is. But once he breaks his contract with her, all bets are off. Troy may be meaner, but a nuclear warhead couldn’t melt the ice covering Davis’ delivery of the line “you a womanless man” to Troy.

“Fences” is a film about how our environment shapes us, and how, no matter how noble their intentions, our parents can’t help but mess us up in some fashion, just as their parents had done for them. This is our legacy as humans. Either we indoctrinate ourselves against that which we saw as wrong with our parents, or we catch their disease and we pass it on. Washington’s visual repetition of crosses throughout the film, either on the wall or in the chain Rose wears around her neck, is a reminder of the greatest father-son story ever told. This notion is in the script too: perhaps the most brutally honest thing Rose tells Cory near the film’s end is that he’s just like Troy. Especially after Cory’s speech about how he tried so hard to remove Troy’s terrifying influence from his soul. Cory’s acceptance of this truth, represented in his co-opting of the song Troy used to sing, is as heartbreaking as it is beautiful. Whether we want it or not, this is our legacy. 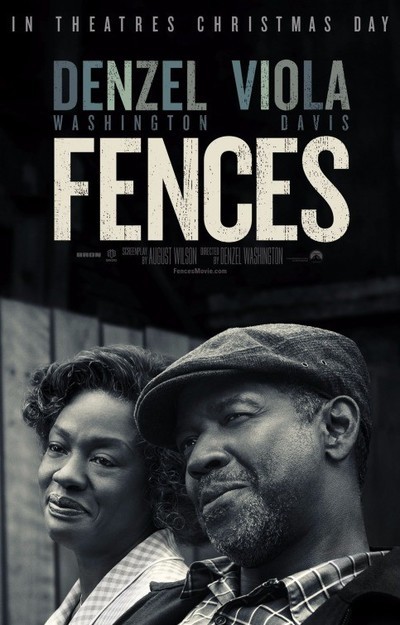 Rated PG-13 for thematic elements, language and some suggestive references.

Writer (based upon his play)