“Trolls” is a sugar-shocked “Shrek,” an aggressively auto-tuned animated fun ride for easily distracted times. Imagine being trapped in a 3-D bouncy castle while being pelted by glitter, sparkles, rainbows, unicorns, marshmallows and cupcakes as Day-Glo woodland creatures, modeled on those smiley naked dolls with feral cotton-candy tresses that were a thing back in the ‘60s, attempt to bliss you into submission.

Yes, it’s likely that most kids won’t notice that this bedazzled confection echoes a certain fairy-tale-skewering franchise built around a sullen green ogre that turned DreamWorks, the company also behind “Trolls,” into a ‘toon superpower. The switcheroo here is that there are not one but two miserable males who are rescued by their love interests while the ladies save the day.

The original “Shrek,” for all of its merciless mockery of a certain competitor’s legacy, at least possessed a beating heart and an expansive soul as exhibited by its then-novel use of the melancholy ballad “Hallelujah” in its tale of redemption. “Trolls,” meanwhile, is a derivative madcap money machine that is all about ensuring that DreamWorks, which has had few hits other than sequels in recent years, has a fresh pipeline of steady revenue. All you have to do is sit through the end credits to see how many bodies were devoted to securing licensing deals (Target.com alone lists 165 tie-in products).

That said, youngsters and more than a few adults probably won’t care that this visual simulation of mindlessly munching an entire bowl full of Skittles and Starbursts in one sitting is basically hollow inside, even with its rather rote message that the power to be happy resides within us all. We are but mere humans, and it will be hard to resist the pre-fabricated pseudo charms of an escapist musical fantasia that invests most of its ingenuity into its insanely infectious soundtrack. The oldies lean heavily on re-imagined staples from every wedding reception held since the ‘80s: “September,” “I’m Coming Out,” “Total Eclipse of the Heart,” “Hello,” “True Colors” and even the Brady Bunch ditty “It’s a Sunshine Day.”

Most of these beat-heavy jams are made all the more catchy by being primarily sung to worm-hole perfection by the film’s two melodically-endowed lead voice actors: Anna Kendrick in prime “Pitch Perfect” form and Justin Timberlake, whose self-penned “Can’t Stop the Feeling” just might be the new “Everything is Awesome” in terms of being impossible not to suddenly hum for no reason days after leaving the theater.

But what about the plot, you say? Well, once upon a time—as shown scrapbook-style with tactile felt cutouts—there was a race of teeny-tiny super-cute trolls whose entire existence revolved around singing, dancing and group hugs performed on the hour. Unfortunately, their joyful existence is interrupted once every year by their sourpuss nemesis neighbors known as the Bergens, a warty tribe of giants with lousy posture, wonky teeth and bad attitudes whose town seems bedecked in what only could be called sewage chic.

This gathering of grumps celebrate a holiday known as Trollstice, when they allow themselves to feel happy for one day by consuming sweet-tasting trolls. Yes, we are talking cannibalism here, but it is only threatened, not seen. One year, King Peppy (Jeffrey Tambor) decides to fight back with the war cry, “No troll left behind,” and finds a way to allow his multi-hued subjects to flee to safety. For two decades, they have been left uneaten—until royal daughter Poppy (Kendrick) throws a loud rave party complete with fireworks. Branch (Timberlake), the Chicken Little of trollhood who is so glum that he is the color of mud, warns that the noise will draw the attention of their enemies. And soon enough, Bergen villainess Chef (Christine Baranski, channeling Carol Burnett), descends upon the wee revelers and scoops up a handful to feed to King Gristle (Christopher Mintz-Plasse), who has never felt happiness.

Off Poppy goes to save her friends, batting away bizarre beasties on her journey, and is soon joined by a reluctant Branch. Opposites-attract tension ensues between the pair, who eventually decide to recruit a Bergen scullery maid named Bridget, who harbors a crush on the king, to distract him enough so they can allow the other trolls to escape. Of course, a beauty makeover occurs Cinderella-style—swoopy troll hair is involved—but one can only do so much with a Bergen.

As Bridget, Zooey Deschanel gives the most engaging vocal performance and manages to add much-needed pathos (she bemoans the fact that she smells like gravy) and comic energy to the proceedings as she vamps the self-centered Gristle. Of course, love eventually conquers all but it can’t camouflage the fact that this narrative is so weak that it is not just secondary to the musical numbers but perhaps even tertiary, considering the merchandising push behind this enterprise. Money, as they say, might not buy happiness. But for just $22.99, you can get a pink hoodie for the Poppy in your life with troll hair attached. Just beware of hungry Bergens. 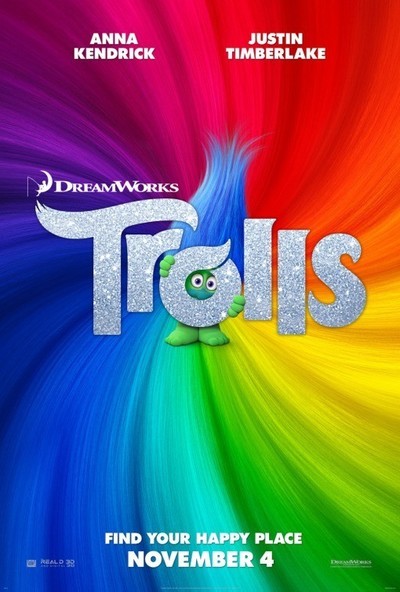 Writer (based on the Good Luck Trolls created by)