“Who is you, man?” Dramatic film has long been fascinated with issues of identity, but they’ve rarely been explored with the degree of eloquence and heartbreaking beauty as in Barry Jenkins’ masterful “Moonlight,” one of the essential American films of 2016. “Moonlight” is a film that is both lyrical and deeply grounded in its character work, a balancing act that’s breathtaking to behold. It is one of those rare pieces of filmmaking that stays completely focused on its characters while also feeling like it’s dealing with universal themes about identity, sexuality, family, and, most of all, masculinity. And yet it's never preachy or moralizing. It is a movie in which deep, complex themes are reflected through character first and foremost. Jenkins’ film is confident in every single aspect of the way that a critic can use that word. Every performance, every shot choice, every piece of music, every lived-in setting—it’s one of those rare movies that just doesn’t take a wrong step, and climaxes in a scene not of CGI or twists but of dialogue that is one of the best single scenes in years.

The protagonist of “Moonlight” reflects the conflicted and fluid masculinity of young African-American men in the United States, even in just the way he’s presented. The film is divided into three chapters—“Little,” “Chiron” and “Black”—the three names used to refer to the same person that we follow from childhood through adolescence to adulthood. He’s a boy and then a man who has trouble figuring out his place in the world, which is also articulated by the character being played by three separate, all-remarkable actors.

The film starts with Chiron as a boy, referred to by his bullies as “Little” (Alex R. Hibbert). We meet this youngster running, trying to hide in a boarded up apartment from the kids who want to beat him up. Little is found there by Juan (Mahershala Ali, doing career-best work), a local drug dealer. Juan takes the kid out to eat, even bringing him back to his place, where he meets his partner Teresa (Janelle Monáe). Little could use this makeshift family. His dad is gone and his mother Paula (Naomie Harris) happens to be one of Juan’s best clients. Juan becomes something of a father figure, but that might make this relationship sound more predictable than it is. Juan sees something good in Chiron and wants to help this quiet boy, even as he provides the product that’s ruining his home life.

The film jumps to Chiron as a teenager, dealing with more intense bullying and questions about sexuality. These are the years in which everyone claims to be sleeping around and a young man like Chiron (now played by Ashton Sanders) struggles to find himself, especially now that all semblance of a normal home life is gone. He literally has nothing, and it takes kindness from his friend Kevin (played by Jharrel Jerome at this age) to bring him comfort. But even that is turned in a time, place and age in which compassion is sorely lacking, when young men believe that violence is the answer to what will make them feel better or allow them to fit in.

Finally, we meet Chiron as a young adult, played with remarkable subtlety by Trevante Rhodes. Kevin (now played by André Holland of “The Knick”) reaches out to a very-different Chiron, and the film’s themes coalesce in a surprisingly emotionally resonant way without monologues or heavy-handed melodrama. In a sense, “Moonlight” is a coming-of-age story about a boy often overlooked by society, that little kid not cool enough to hang with the bigger ones and without the support of a family to keep him from simply disappearing into the night.

The trio of performances that make up Chiron from Hibbert/Sanders/Rhodes are perfectly calibrated by Jenkins, who directs them to feel not like imitations of each other but express growth. We can see the sad eyes of Chiron as a boy reflected in Chiron as a man. “Moonlight” could have easily felt episodic, especially with three actors playing the same character, but it’s stunning how much it never falters in that regard. Jenkins’ work with his ensemble creates consistency from chapter to chapter, even as the cast changes as often as it does. Jenkins also draws great turns from Harris and Ali, playing two of the most influential people in Chiron’s life.

Jenkins and his technical team shoot Miami in a way that we don’t often see, using their setting brilliantly, especially the way that the water and the beach around it can feel like a break from the troubles of the real world. But "Moonlight" is a film about faces. Chiron’s eyes say so much that this young man has not been taught how to express. He is young, black, gay, poor, and largely friendless—the kind of person who feels like he could literally vanish from being so unseen by the world. During one of the film’s many memorable dialogue exchanges (written by Jenkins, adapted from a play by Tarell McCraney), Chiron speaks of crying so much in his life that he feels like he could simply turn to liquid and roll into the ocean.

While there’s memorable dialogue in “Moonlight,” it’s what’s unsaid that really resonates. It’s the look of a morally complex father figure when a child asks him why other kids call him a bad word. It’s a nervous glance between two young men who know something is a little different about their relationship but society has given them no words to express it. And it’s in the final scenes of the film—in which Jenkins knows he’s laid the groundwork, trusts his actors and allows the emotions of what’s unsaid to provide the dramatic thrust—that “Moonlight” makes its greatest impact. Jenkins deeply understands that it is human connection that forms us, that changes our trajectory and makes us who we are. 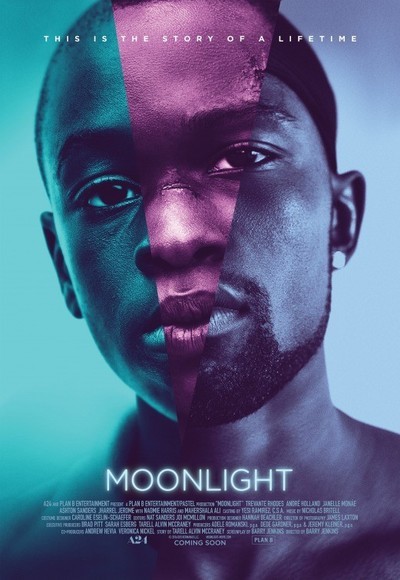