Fantasy films aimed at kids don’t have to have political messages, but when they do, they should either be internally consistent, or work through the contradictions in terms that kids can apply to the real world. “Zootopia,” a fantasy set in a city where predators and prey live together in harmony, is a funny, beautifully designed kids’ film with a message that it restates at every turn. But if you think about that message for longer than five minutes, it doesn’t merely fall apart, it invites a reading that is almost surely contrary to the movie’s seemingly enlightened spirit: discrimination is wrong, but stereotypes are stereotypes for a reason, and it’s not easy for members of a despised class to overcome the reasons why the majority despises them, so you gotta be patient.

Ginnifer Goodwin (“Big Love”) voices Bunny Hops, a small town rabbit who’s told that she can’t be a police officer in Zootopia because there’s never been a rabbit police officer. (The job tends to be done by predators and large herbivores—like a water buffalo that’s become a police captain, voiced by Idris Elba.) Hops makes it through police training anyway and gets assigned to meter maid duty, to the relief of her carrot farmer parents (Bonnie Hunt and Don Lake), who gave her fox repellent as a going-away present. They had good reason to give her fox repellent: the fox is one of the rabbit’s mortal enemies, and when Judy was child, a fox cornered her at a county fair, insulted her for being a bunny, and slashed her face with his paw. (This is a slightly more intense kid-flick than you might expect, given how many adorable animals are in it.)

Of course Hops ends up partnered with a red fox named Nick Wilde (Jason Bateman), a small-time hustler who reluctantly helps her investigate the disappearances of a dozen predators. I won’t reveal exactly what the mystery is here (it’s a pretty good one) except to say that it invites kids and parents to talk about nature versus nurture, and the origins and debilitating effect of stereotypes.

But this turns out to be not such a great thing once you get deeper into the movie. Because people are not animals, I dread thinking about the “logical” conclusions to which such conversations will lead. The film isn’t wrong to say that carnivores are biologically inclined to want to eat herbivores, that bunnies reproduce prolifically, the sloths are slow-moving (they work at the DMV here), that you can take the fox out of the forest but you can’t take forest out of the fox, and so on. If you think about all this as an analogy for the world we live in (particularly if we live in a melting-pot big city like Zootopia) and and then ask yourself which racial or ethnic or societal groups (cops, businesspeople, city bureaucrats) are “predators” and which are “prey” (for purposes of metaphor translation), you see the problem. "Zootopia" pretty much rubber-stamps whatever worldview parents want to pass on to their kids, however embracing or malignant that may be. I can imagine an anti-racist and a racist coming out of this film, each thinking it validated their sense of how the world works.

“Zootopia” is constantly asking its characters to look past species stereotypes, and not use species-ist language or repeat hurtful assumptions. “Only a bunny can call another bunny ‘cute,’” Hops warns a colleague It’s filled with moments that are about overcoming or enduring discrimination. “Never let them see that they get to you,” Wilde advises Hops. And there are acknowledgments of the destructive self-hatred that discrimination can cause. Many of the animals make self-deprecating jokes at the expense of stereotypes about their species (such as Hops volunteering to do math for Wilde, telling him, "If there's one thing we bunnies are good at, it's multiplying"), and there's a fairly intense flashback which reveals that Wilde became a hustler because other animals hazed him as a pup while repeating anti-fox stereotypes, and responded by embracing his species' caricature and becoming the foxiest fox anyone had seen. This all seems clever and noble until you realize that all the stereotypes about various animals are to some extent true, in particular the most basic one: carnivores eat herbivores because it's in their nature. (Yes, readers, I know, there are tigers who've been taught to snuggle with lambs, and I've seen the same memes with cats and dogs snuggling that you have; I mean in general.)

It might seem weird that I’m dwelling on this aspect of “Zootopia,” which is directed by Byron Howard & Rich Moore and co-directed by Jared Bush, because the movie is entertaining. The thriller plot, which borrows rather generously from “48 HRS” and every cop drama involving governmental conspiracy, is smartly shaped  It’s hard to imagine any child or adult failing to be amused and excited by parts of it. The compositions and lighting are more thoughtful than you tend to get in a 3-D animated film starring big-eyed animals who speak with the voices of celebrities. And there are a few sections that are transportingly lovely, in particular any sequence involving the pop star Gazelle (voiced by Shakira), and Hops' high-speed train ride towards and through Zootopia, which introduces the city's different terrains (including frozen tundra and misty rainforest) while leaving room for subsequent bits of spelunking (a foot chase through rodent town lets Hops know what it feels like to be a giant). Some of the biggest laughs come from obvious gags that you know the writers couldn't resist, such as the bit where Idris' water buffalo captain says they can't start the morning briefing without acknowledging the elephant in the room. If you decide not to think about the metaphor that the film is built around, it's an enjoyable diversion, made with great skill.

Still: is it too much to ask that a film that wears its noble intentions like a jangling neck collar be able to withstand scrutiny? If "Zootopia" were a bit vaguer, or perhaps dumber and less pleased with itself, it might have been a classic, albeit of a very different, less reputable sort. As-is, it's a goodhearted, handsomely executed film that doesn't add up in the way it wants to. 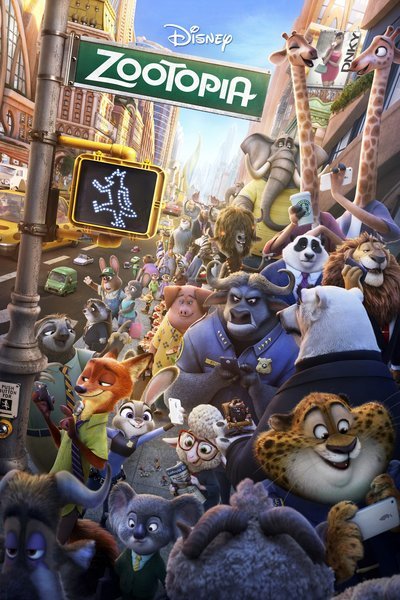 Rated G for some thematic elements, rude humor and action.