For the few Americans fortunate enough to visit Iran, one of the most startling discoveries can be the vitality, diversity and popularity of the arts scene in cities like Tehran. Literary festivals of all sorts abound, as do most varieties of the visual arts. Granted, the government’s Islamic restrictions put the damper on all but traditional forms of dance, and public performances of vocal music by women are effectively verboten. Yet, as Bahman Ghobadi’s delightful 2009 doc “No One Knows About Persian Cats” showed, pop music including punk and rap thrives in urban undergrounds, the efforts of government censors notwithstanding. Indeed, the chance to defy the regime’s thought police seems a prime motivator for many young artists and their fans.

Theater is also a lively center of cultural action. While Iran, uniquely in its region, has not only an indigenous form of traditional theater (Ta’ziyeh) but also a strong modernist descendant that includes such monumental talents as writer-director (and filmmaker) Bahram Beyzaie, Tehran also sees frequent stagings of works by playwrights including Ionesco, Beckett and Pinter. When a friend asked if it was realistic that Asghar Farhadi’s new, Oscar-nominated “The Salesman” shows an Iranian company staging Arthur Miller’s “Death of a Salesman”—a play by an American Jew—I replied that such things are common, as are presentations of works by Americans such as Tennessee Williams, Edward Albee and Sam Shepard.

Next to Beyzaie, Farhadi is the prominent Iranian filmmaker most associated with theater. Arriving in Tehran hoping to study cinema in college, he was instead assigned to the theater school, an apparent misfortune that he has called one of the luckiest things that ever happened to him. Studying the literature of theater—he did his dissertation on Pinter’s use of silence—he has said, taught him to write, and that skill has been integral to his career as a filmmaker. While other Iranian directors seem to reflect the influence of the Italian neorealists and other Europeans, Farhadi freely admits his admiration for films like Elia Kazan’s “A Streetcar Named Desire,” with its fusion of cinema and the stage. “The Salesman,” though, marks the first time he’s ever taken us into the theater.

The meaning and importance of that move are worthy subjects for discussion, because in no sense does the film seem to be about theater. I recently asked Farhadi if he was familiar with theater-themed Jacques Rivette films such as “L’Amour Fou” and “Out 1,” and he said he wasn’t. That makes sense, because he’s not an experimenter like Rivette. More akin to R.W. Fassbinder, he uses the language of theatrical melodrama to probe social and psychological fissures. Like all but the first two of his features, “The Salesman” tackles what has become his signature subject: middle-class marriage.

The film opens showing us a marriage bed—a startling image in an Iranian film. But the lighting soon signals that this bed is on a theater stage; it will be the bed of Willy and Linda Loman. Next, we are in a suburban apartment building at night where the inhabitants are screaming and running for the exits. A disaster has destroyed the structure’s foundations and among the newly homeless are Emad (Shahab Hossieni) and his wife Rana (Taraneh Alidoosti). They are amateur actors playing the Lomans on the stage we’ve just witnessed, and that avocation turns out to be fortunate in one sense: one of their fellow performers generously guides them to a vacant apartment he knows about.

A spacious two-bedroom on the top floor of a building, it seems close to perfect, so they move in. Meanwhile, we see Emad in his day job teaching literature to a class of teenage boys. The key reference here will be unfamiliar to American viewers, so it’s worth unpacking. Emad is assigning the short story “The Cow” by Gholem-Hossein Sa’edi, a leading Persian 20th-century literary figure and political activist. After publishing the story, Sa’edi converted it to a film script that became the basis for Dariush Mehrjui’s “The Cow” (which we glimpse in a subsequent scene), the 1969 film that legendarily launched the Iranian New Wave of the 1970s and, after the Iranian Revolution, reportedly inspired the Ayatollah Khomeini to give his blessing to the continuance of Iran’s cinema, leading to its revival and global success in the 1980s and beyond.

In “The Cow,” when an impoverished village loses its one cow, its owner goes insane, mooing and eating flowers as he imagines himself to be his beloved animal. “How does a man turn into a cow?” one of Emad’s students asks. (“Look in the mirror,” another cracks, provoking laughter.) The question, it turns out, prefigures what happens in “The Salesman,” even as the scene also suggests a correlation between the tragic protagonists of “The Cow” and “Death of a Salesman.” Emad names the Miller work when a student asks what play he’s rehearsing. He asks the students if they know it; none do. (That many educated adults in Iran undoubtedly would know the play points toward a divide more generational than national: While adults worldwide have grown up in cultures that value literary tradition, young people are more preoccupied with video games and phones.)

One night, Rana is taking a shower when the apartment’s buzzer sounds. Thinking it’s Emad, she buzzes him in and returns to the shower. Soon we are in a hospital, where a frantic Emad sees his wife getting stitches in her head, badly injured. As he pieces together what happened, it seems an intruder came upon Rana in the shower, there was a struggle, glass was broken that cut her and left the intruder fleeing with bloodied feet. Neighbors heard the commotion, found Rana and got her to the hospital. She tells Emad she doesn’t want the police involved as she doesn’t want to tell the story again.

In pursuing his own investigation, Emad finds out that their apartment’s previous tenant was a prostitute. It seems that the intruder wasn’t a random stranger but a client thinking he was joining her in the shower for some action (he even left some money in the bedroom). Putting the pieces together, Emad first vents his anger on the fellow actor who turned him on to the apartment, snarling improvised insults at him during “Death of a Salesman.” But as this guy is obviously guiltless, the wounded husband becomes more and more obsessed with finding the real guilty party.

The previous film that took Farhadi to the Oscars was “A Separation.” This one could be called “A Violation.” Rana seems to make shaky but real progress in her recovery, even if her return to the stage entails difficulties: she can’t complete one performance because she says the eyes of one man in the audience remind her of the intruder’s. Increasingly, though, it seems the harshest violation was of Emad—his self-worth, his ego, his manhood.

Some descriptions of “The Salesman” call it a thriller, suggesting a Hollywood-style suspense film. It’s not. It’s a psychological and moral drama about how one man’s anger and damaged self-image drive him to the brink of destroying the very thing he ostensibly most wants to protect: his marriage. Yet Farhadi’s stylistic proclivities remind us that he is the most Hollywood-influenced of major Iranian directors. While the shower scene here is just as crucial as (if far less explicit than) the one in “Psycho,” Farhadi’s depictions of people ascending or descending stairs recall Hitchcock’s, just as his way of moving through rooms (usually shot in smooth hand-held by cinematographer Hossein Jafarian) evokes Kazan’s sinuous, stage-influenced sense of mise-en-scène.

Kazan’s example may also be felt in the film’s strong, finely tuned performances. Though the first post-revolutionary Iranian films to gain international attention often used non-actors, Farhadi’s recent films have derived much of their precision and power from the skills of accomplished film and stage actors. Here, Hosseini’s work as Emad anchors the film with its deceptively casual gravity: precisely because he’s so modern and hip-urban in demeanor, it’s hard to imagine that this guy can collapse into primal vindictiveness, but so he does. Bringing out Rana’s combination of disorientation and underlying decency, Alidoosti shows why she’s become one of Iran’s leading young actresses. Some equally fine performances occur in secondary parts, including ones that come to the fore in the film’s tensely suspenseful final act.

When “A Separation” capped its global success by becoming the first Iranian film to win an Oscar, Farhadi effectively became an international director, a fact he implicitly acknowledged by making his next film, “The Past,” in France. With “The Salesman,” he returns not only to Iran but to some deeply Iranian themes, examining an atavistic tendency even in the most modern-seeming men and pitting that against the compassionate humanism at the core of both secular and religious thought in Iran. At the same time, the film finds Farhadi now inhabiting a strangely transnational place in cinema, one where bridging Gholem-Hossein Sa’edi and Arthur Miller is more a playful, aspirational gesture than a purposeful strategy. As impressive as the dramatic facility of “The Salesman” is, it lacks any real urgency or sense of daring, as if a night in the theater (or cinema) was not supposed to signify outside its walls. 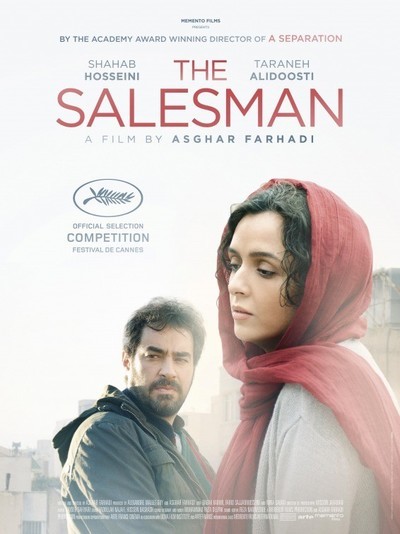 Farid Sajjadi Hosseini as The Man