We're back after a week off for Women Writers Week with a great selection of new titles on streaming services, Blu-ray and DVD. In fact, we may have the most diverse array of offerings in the history of the guide. For Netflix, we're focusing on recent films that may have slid under your radar, arthouse releases that didn't play in a lot of cities in the country. It's unlikely they played in your hometown, and they're all worth a look, to varying degrees. For Blu-ray and DVD, we have a multiple Oscar nominee, a hit franchise in a 4-movie set, three Criterion releases, one of the best TV shows of all time, and the latest from Hollywood's provocateur, Quentin Tarantino. Why don't you just buy them all? (There are links if you're crazy enough to do so.)

"Born to Be Blue" 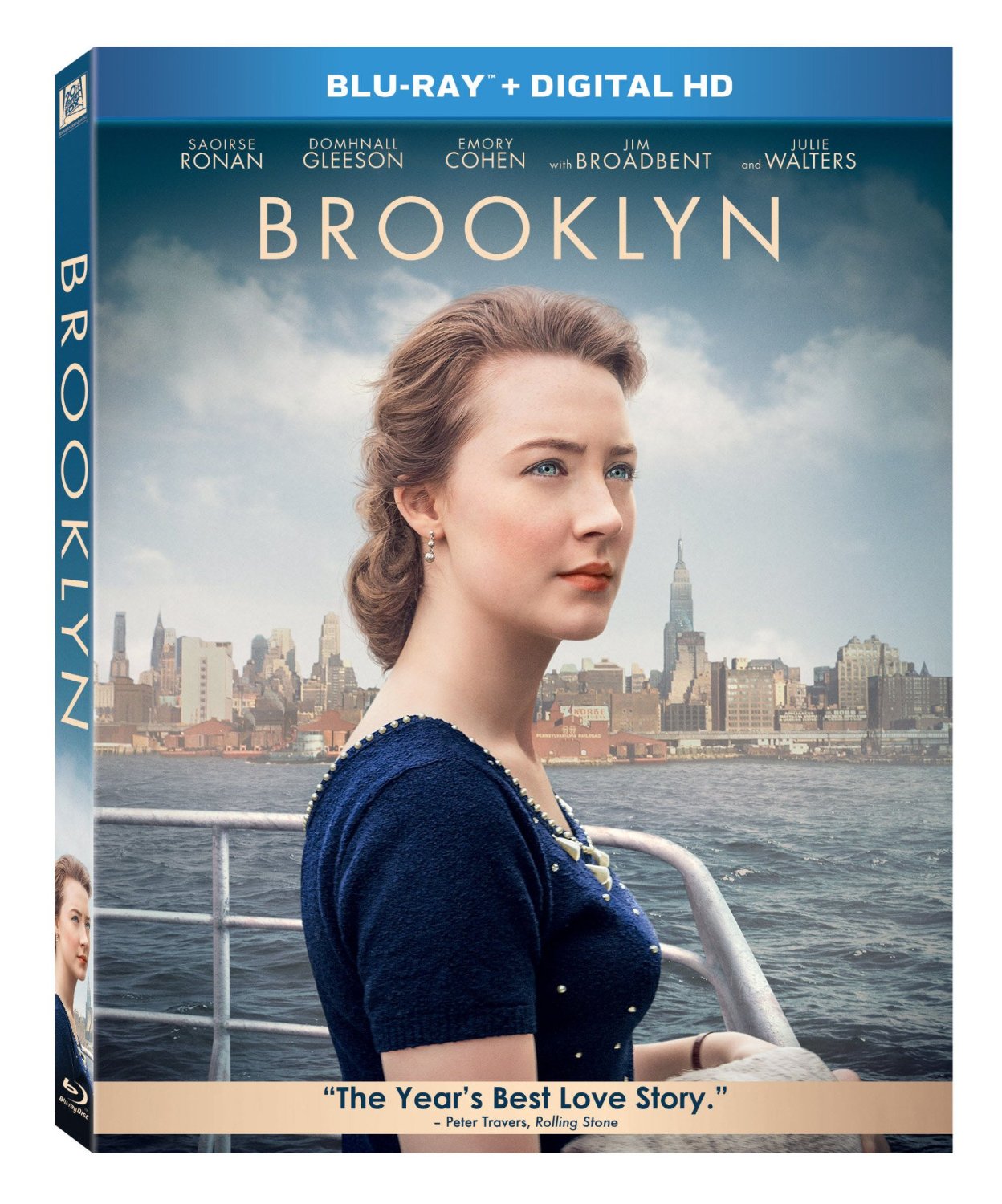 My second favorite 2016 Best Picture nominee (after "Mad Max: Fury Road," of course) actually went home empty-handed on Oscar evening. From the minute I saw it at the 2015 Sundance Film Festival, I fell in love with "Brooklyn," a touching, emotional coming-of-age story that feels both common and deeply personal. It is the story of many and the story of one. It is old-fashioned, sentimental and beautiful, carried by great performances all around, beautiful cinematography, and a delicate script by the great Nick Hornby. Long after many of 2015's most controversial films have faded from memory, people will be watching "Brooklyn." It already feels timeless. The Fox Blu-ray is a sturdy one with a great HD transfer, deleted scenes and a fantastic sudio commentary by director John Crowley, whose accomplishments arguably got lost in the press for the film that focused more on Ronan and Hornby. 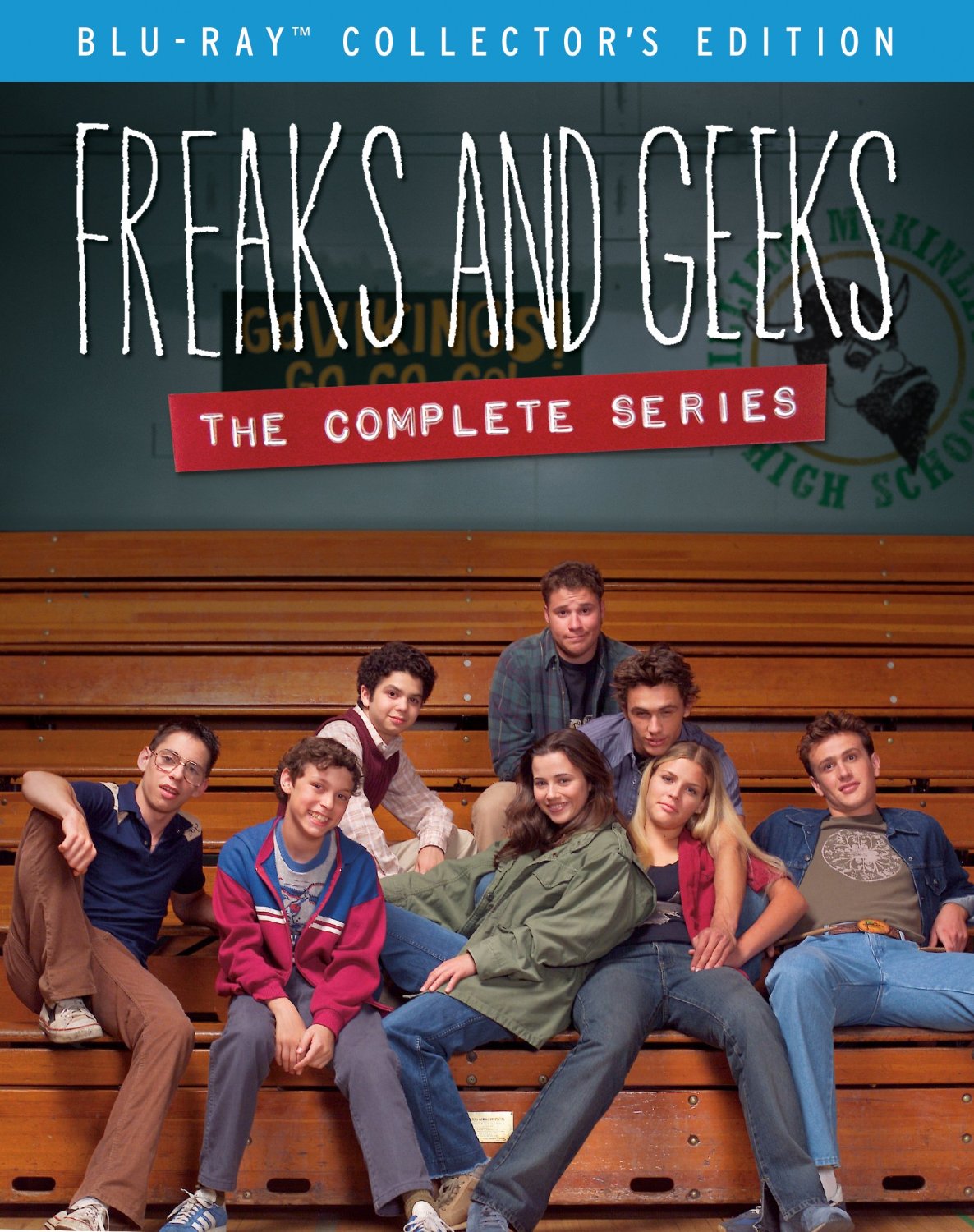 "Freaks and Geeks: The Complete Series"

Why are the greatest TV shows often so brief? Is it because programs like "Firefly" never got a chance to suck that we love them? (Of course, it never would have sucked. We all know that, but you get the point.) Would "Freaks and Geeks" have turned to trash if it had been on the air longer? It's doubtful. Watching it now, so many years after its debut, it's clear that the cliched phrase that "this show was ahead of its time" rings true. Is there any doubt that "Freaks and Geeks" would be a hit today? I have none whatsoever. In the era of the TV recap, a show this razor-sharp would be embraced and adored. And the cast. Oh my God, the cast. One forgets how many great names came out of "Freaks and Geeks," including Jason Segel, James Franco, Seth Rogen, Martin Starr, and Linda Cardellini. So what took so long for the show to get to Blu-ray? It was mostly because of the music rights, which Shout Factory and the team behind the show fought to get. The show has also been remastered in widescreen, which (other than the pilot) it was actually shot in. So they went back to the negative, presenting a version of the show that most people haven't really seen, while also presenting the original broadcast. In typical Shout Factory manner, the set is definitive. There are multiple commentaries, outtakes, deleted scenes, and gorgeous packaging. It is a must-own for fans of the current era of Peak TV. It's part of the way we got here. 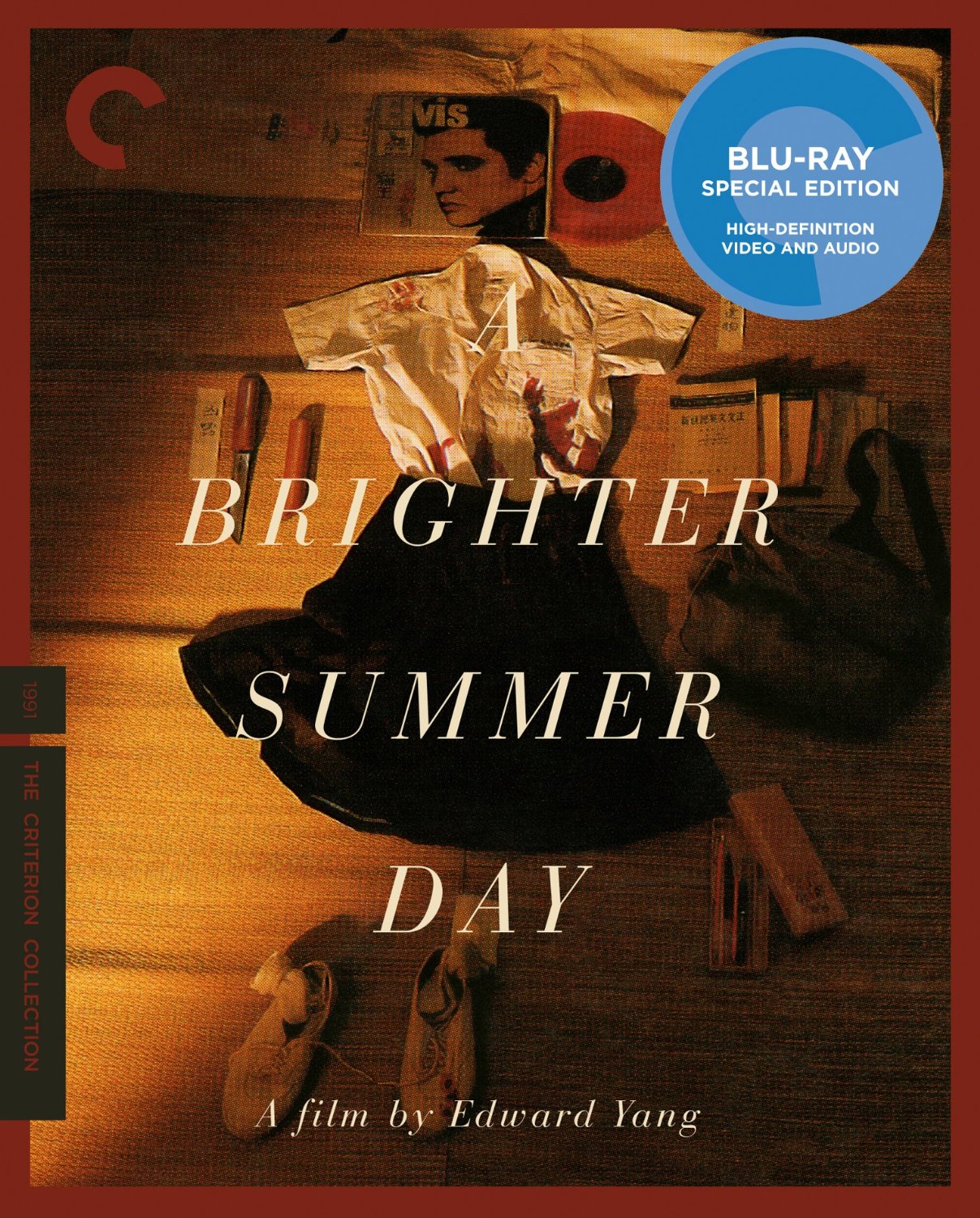 Edward Yang's "A Brighter Summer Day" was like something of a cinematic holy grail, one of those movies spoken about in hushed tones that people couldn't actually see. Released in 1991, this four-hour epic was definitive in a new wave of Chinese cinema, and many of us had seen Yang's later films, including the masterful and highly acclaimed "Yi Yi" in 2000. I had heard about the film for years, but never had a chance to see it until a 2009 restoration from the original 35mm negative provided by Yang's own estate, which led to this Criterion 4K digital restoration, which comes with a new subtitle translation, commentary track, interview, two-hour documentary and a fantastic essay by our very own Godfrey Cheshire. Not only is this the release of a hard-to-find, essential film in the international canon, but it's a definitive one by Criterion, providing special features that enhance the experience and allow you to place a challenging film in its historical context. 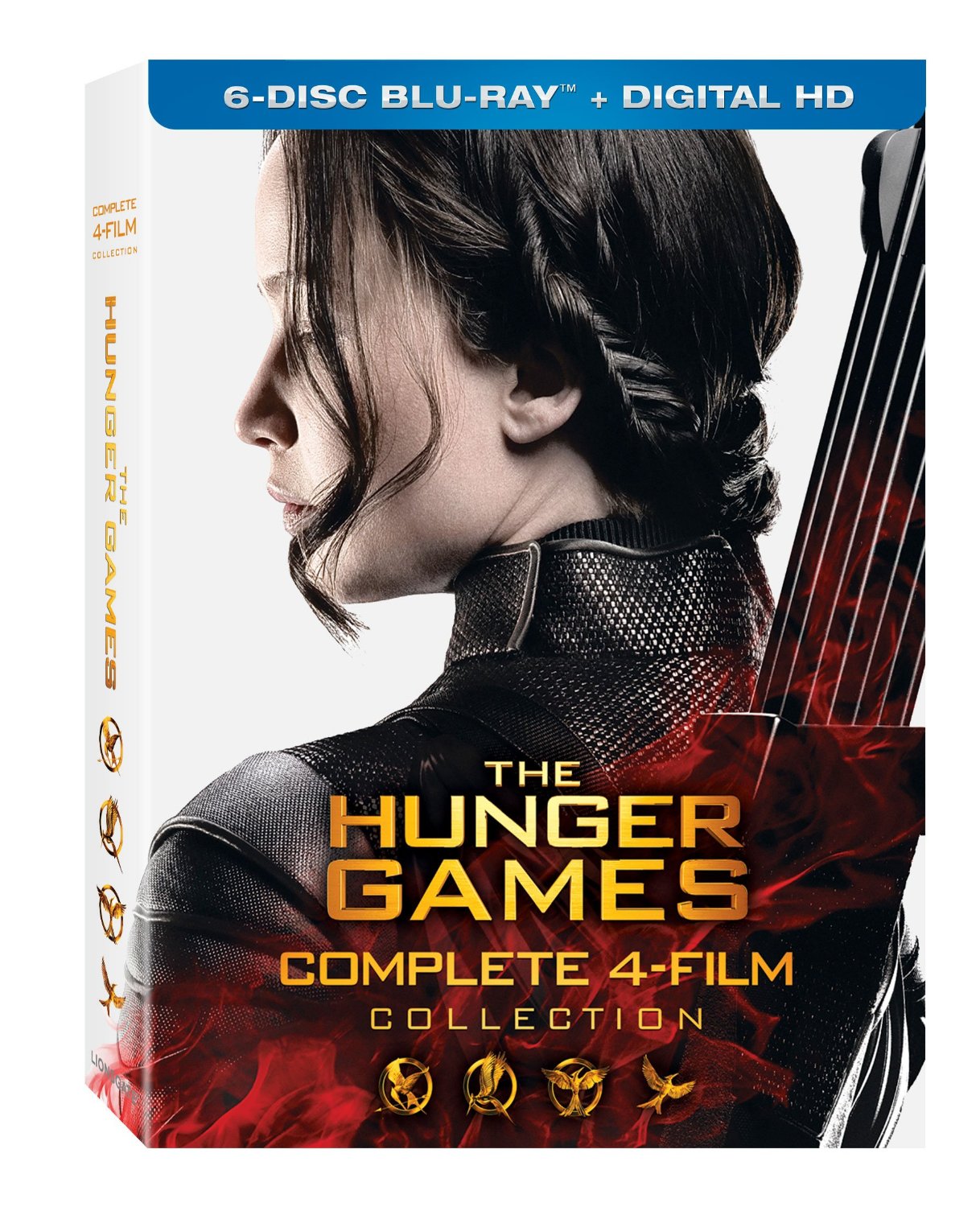 Coinciding with the release of "The Hunger Games: Mockingjay - Part 2," Lionsgate has released an impressive 4-film collection of the quartet of films in one of the most lucrative film franchises of all time. These films have made $1.4 billion domestically alone. They are an industry. And they have legions of fans. Those fans probably don't care that I was greatly disappointed in the last two films, especially part 2, in which the saga of Katniss Everdeen ended in a whimper instead of a bang. The fact is that the final book never should have been split in two. It completely derailed the momentum of the franchise. The great cast, especially Jennifer Lawrence, Donald Sutherland, Philip Seymour Hoffman, and Woody Harrelson, keeps it always entertaining, but you can feel the bloat from breaking one book into two films. Having said that, the collection is impressive, housed in unique packaging and including several special features and deleted scenes that fans have never seen before. And, in the end, that's what matters. It's impossible for fans to be disappointed by this set. 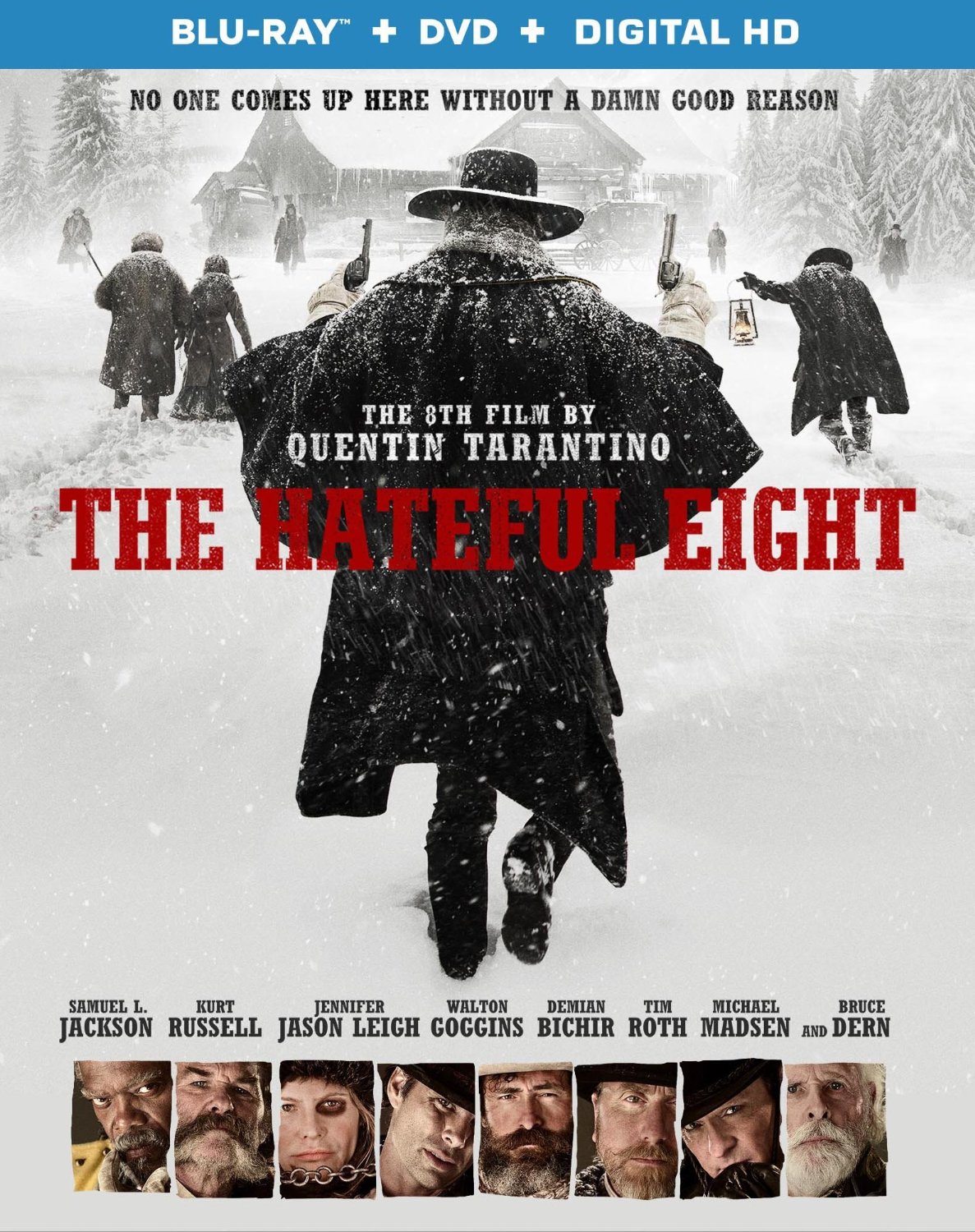 So much has been written about the controversy surrounding Quentin Tarantino's eighth film that I don't feel like my voice needs to be added to the argument. A number of readers have noticed that the film was on my year-end list, and I stand by it, although I see why some have responded to its misogyny and racism in the way they have. That's the great thing about movies. We don't all have to agree. I love "The Hateful Eight" for its craft: Robert Richardson's fluid camerawork, the detailed design, and a director in complete control of his filmmaking skill. I also love the performances, especially those of Jennifer Jason Leigh, Kurt Russell, Samuel L. Jackson and the woefully underrated Walton Goggins. You know what I don't love? This Blu-ray. It doesn't include the Roadshow Edition or much of anything in the way of Special Features. It seems likely a placeholder for an inevitable special edition, although given I'm still waiting for the reported special one-movie version of "Kill Bill," this could be holding place on my shelf for a long time. 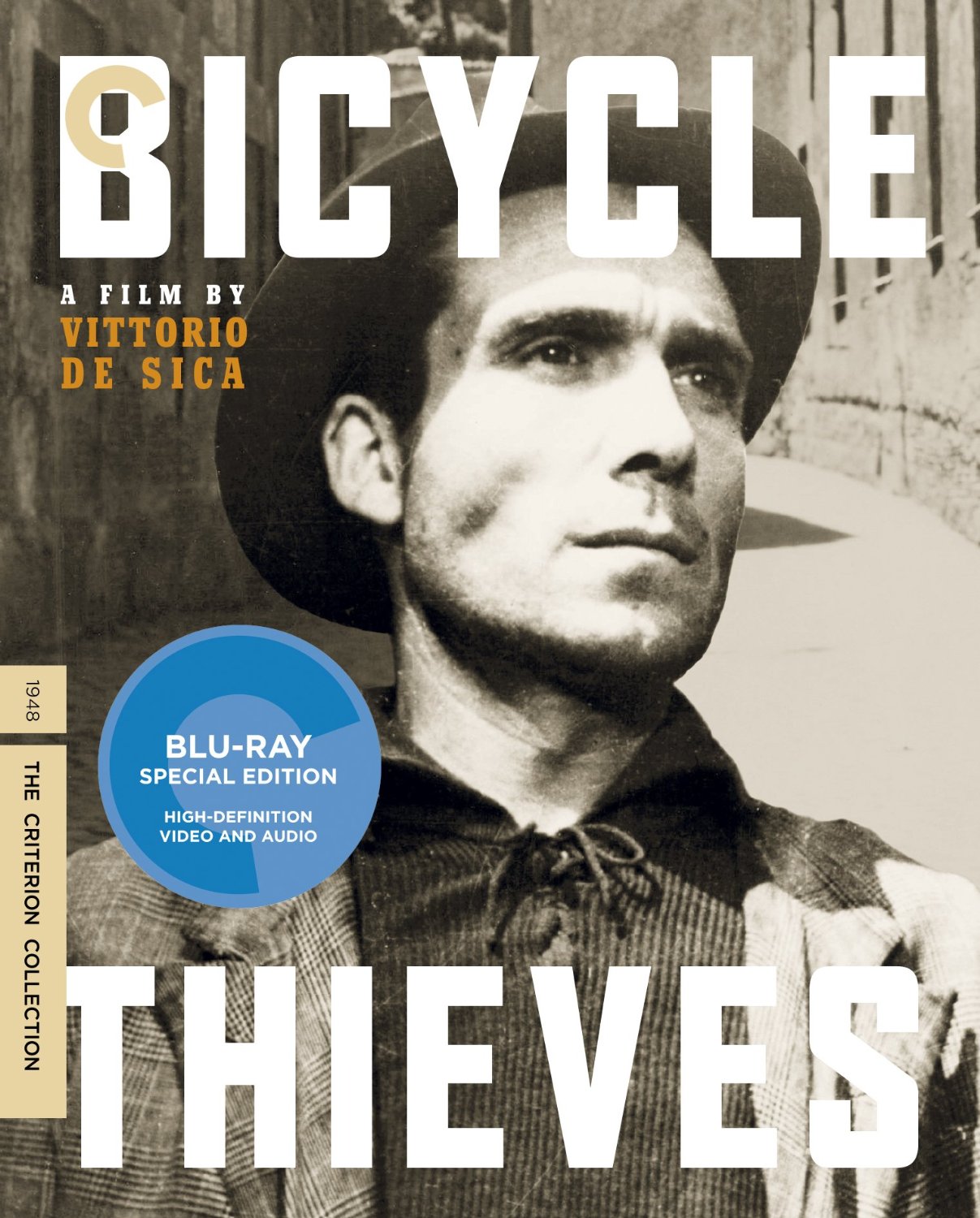 When I was first falling in love with film, Vittoria De Sica's "The Bicycle Thief" (as I knew it then) was one of the most important films in my appreciation of international cinema. If you think about it, it's a great film for young viewers or those scared about films not in the English language, because its themes are transcendent of language. I also knew of its international reputation, having won an Oscar and often being named one of the greatest films of all time (it was #6 on the last Sight & Sound poll). It's the doorway to a great period in Italian cinema, which can lead viewers to French cinema, and then the world truly opens up. This version, with a new restoration, is beautiful, with just the right amount of grain on the black-and-white picture to make the film look of its era. The special features are dense, including another essay by the one and only Godfrey Cheshire, and an interesting documentary from 2003.

Special Features
New digital restoration (4K on the Blu-ray), with uncompressed monaural soundtrack
Working with De Sica, a collection of interviews with screenwriter Suso Cecchi d'Amico, actor Enzo Staiola, and film scholar Callisto Cosulich
"Life as It Is," a program on the history of Italian neorealism, featuring scholar Mark Shiel
Documentary from 2003 on screenwriter and longtime Vittorio De Sica collaborator Cesare Zavattini, directed by Carlo Lizzani
Optional English-dubbed soundtrack
Plus: A booklet featuring an essay by critic Godfrey Cheshire and reminiscences by De Sica and his collaborators 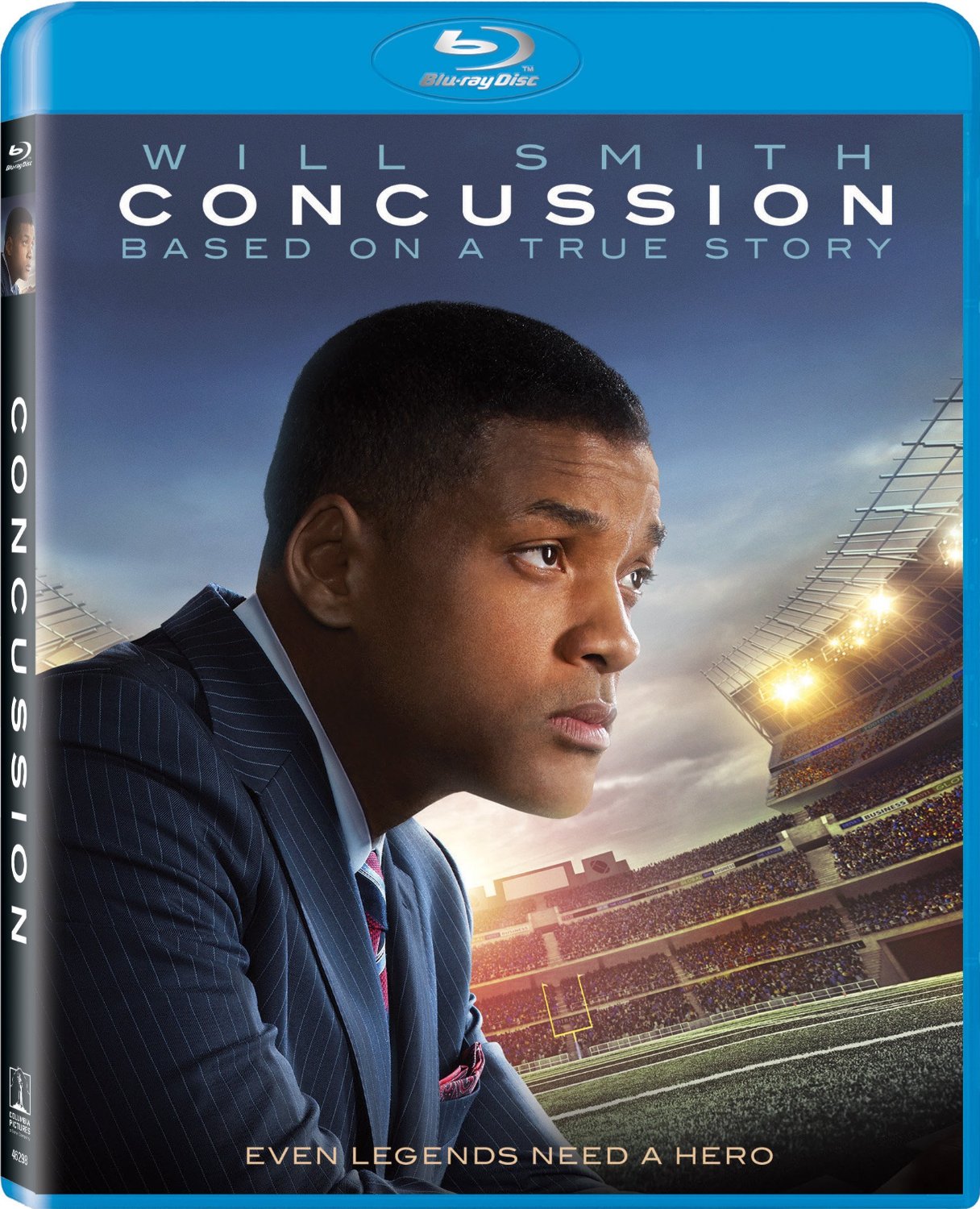 For about an hour, I was surprisingly on board with "Concussion," Will Smith's controversial film about the true story of Bennet Omalu's discovery of the relationship between football and CTE. Smith is solid and grounded, giving his first truly dramatic performance in some time (no, "Focus" doesn't count), and the supporting cast is excellent. (Note to casting agents: Put Gugu Mbatha-Raw in everything.) The problem with "Concussion" is that the film loses its bite when it gets to the portion involving the NFL's role in covering up concussion injuries and protecting its brand. The story goes that the NFL had to approve the script in order for the film to use the real team names and logos, and that's inherently going to present problems. It's not toothless, but it's pretty close. 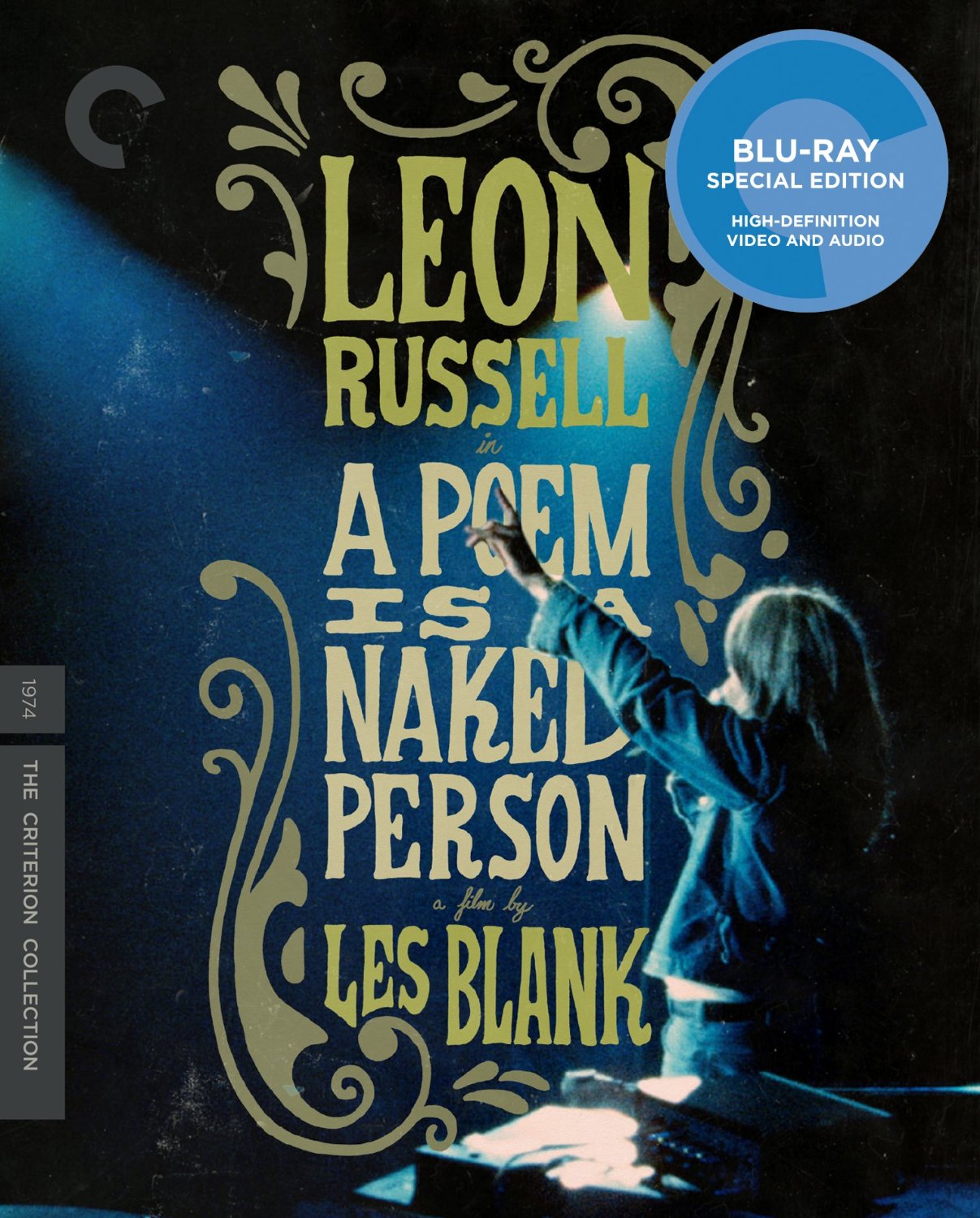 "A Poem is a Naked Person" (Criterion)

Last year, Criterion released a fantastic box set of documentarian Les Blank's films to great acclaim, following it up recently with another cinematic holy grail, a film that the director made from 1972-74 but didn't release until last year, after his death. The movie follows musician Leon Russell for two years, its release delayed due to music clearance issues and creative differences. Blank's son, Harrod, spent years getting the finished film to audiences, and Criterion has put their label on it, making it more likely to find Blank's and Russell's fans. It's funny how film works sometimes. Four decades after Blank spent two years of his life on this project, it can finally be appreciated.

Special Features
New, restored 2K digital transfer, supervised by executive producer Harrod Blank, director Les Blank's son, with uncompressed monaural soundtrack on the Blu-ray
New conversation between musician Leon Russell and Harrod Blank
Excerpts from a 2013 Q&A with Les Blank
A Film's Forty-Year Journey: The Making of "A Poem Is a Naked Person", a new documentary featuring interviews with Harrod Blank, assistant editor and sound recordist Maureen Gosling, and artist Jim Franklin
Out in the Woods, a short documentary by Gosling
Trailers
Plus: An essay by critic Kent Jones 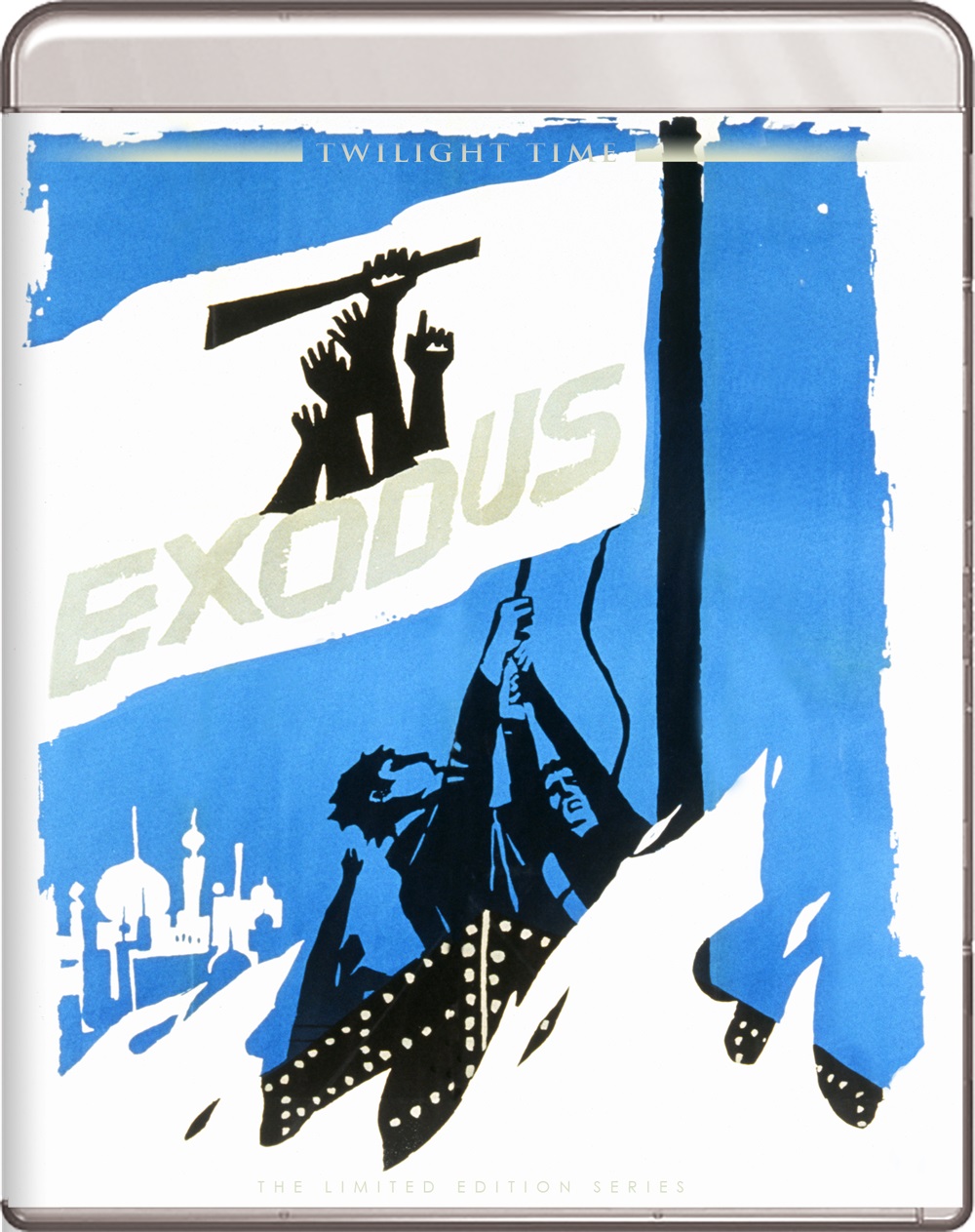 The great Twilight Time sent over their batch from March 2016. Last month, I just picked out a few favorites, but they're all kind of great this month, representing a diverse array of subject matter and style. The most famous of the bunch is probably "Lilies of the Field," the movie that won Sidney Poitier the first Oscar ever won by an African-American actor. It's easy to see why as Poitier's star power and incredible humanity is on display in this beloved drama. "Exodus" would be a close second, perhaps getting a second appraisal now in light of "Trumbo," as the production of this 1960 drama is an essential part of Jay Roach's Oscar nominee. It's co-credited as ending the Hollywood blacklist, allowing Trumbo to take credit for his work again. Rounding out the month is the 1956 take on "Anastasia" with Ingrid Bergman and Yul Brynner (I prefer the 1997 animated version), the Robert Rossen - Richard Burton take on "Alexander the Great" from the same year, and the great "10 Rillington Place," a 1971 crime drama starring Richard Attenborough, John Hurt and Judy Geeson.

In two weeks: "Only Angels Have Wings," "Texas Chainsaw Massacre 2," "The Revenant" and more!