Johanna Parry (Kristen Wiig) wears sensible lace-up shoes, ankle socks, and linen dresses, with a little cardigan over her shoulders. When she cooks or cleans, she puts on a flowered apron. She is so unworldly that when she is told to "set up a password" at the library in order to use the computer, she asks the librarian, "My own word?" She has worked in the service of others, as a housemaid/nanny/nurse since she was 15. Her voice is soft and flat, and when she speaks, she uses functional practical language. She has feelings about the families with whom she lives, but you would never guess any of it looking at her face. She has no self-pity. And so, when Johanna suddenly awakens to love, early on in "Hateship Loveship," it is both electrifying and perilous. She is not used to being overwhelmed with feelings, sexual and romantic, and she doesn't know how to behave; she doesn't know where to put it all. Watching Kristen Wiig's lived-in and alive performance as this blunt, practical, and yet totally innocent woman is to be in the presence of something very very special.

After working in the employ of an elderly woman for most of her life, Johanna (Wiig) gets a job as a housekeeper in Iowa for Mr. McCauley (Nick Nolte) and his feisty teenage granddaughter Sabitha (Hailee Steinfeld). Sabitha's mother was killed when her father Ken (Guy Pearce) crashed their car, drunk at the wheel. He has done time in prison, which is why Sabitha lives with her grandfather. Ken is visiting when Johanna shows up on the doorstep for her first day. He is friendly to her, inviting her out for burgers with his daughter, saying to her off-handedly when she does something helpful, "Thanks, gorgeous." At his comment, something enormous arises from the depths in Wiig's face. We don't know anything about Johanna, not really, and yet the strange blush that creeps up over her face, the sudden smile struggling at her lips, makes us understand everything.

Guy Pearce plays Ken as a guy who, despite all of his problems, still has glimmers of the charm and warmth that he probably had as a young guy. His kindness to Johanna is not targeted or creepy, but automatic and casual. He is filled with self-loathing over his mistakes: his drug addiction, being a terrible dad unable to take care of his daughter, and knowing that everyone thinks he is a loser. But watch how he approaches McCauley about a loan for the motel he wants to fix up in Chicago. He "sells" it in a way that is almost convincing, what a good investment it will be, how great it all will be when it is done, how it will be the very thing he needs to get his life in order. And Pearce plays him without judgment: Ken is a guy who buys his own lines, at least while he is saying them. It's a complex character, in other words, and "Hateship Loveship" lets him be complex. It doesn't ask us to come down on one side or the other. His actions are often reprehensible. And sometimes he is beautifully warm and accepting. Both are true.

Sabitha and her friend Edith (Sami Gayle) concoct a cruel joke to play on the new housekeeper, who floats drably around the house, cooking and cleaning and wearing weird clothes. They send her a letter, purportedly from Sabitha's dad, basically saying he can't stop thinking about her ever since they first met, and would she be his friend? Johanna, alone in bed, reads the letter, again with these uncontrollable feelings swarming up from the depths and doing battle on her face. There is an absolutely extraordinary scene, breathtaking in its vulnerability, where Johanna presses her lips up against the bathroom mirror and kisses herself passionately, slobberingly, like she maybe saw in a movie once. The moment could be pathetic. It isn't. It has in it all of the need and yearning of lonely people everywhere.

Knowing that none of this is real, that Ken never wrote her a letter at all, that he is holed up in a rundown motel by a Chicago freeway with his junkie girlfriend (Jennifer Jason Leigh) makes watching the film an incredibly uneasy experience. We see what happens when a woman who has never been loved, who has never even thought of love as something she could have, is given a glimpse of it. We see how it alters her, utterly. She does not know it is a fiction. A more experienced woman would have seen through the lines in those letters, would have guessed that something was amiss. Johanna is not that woman, and instead of battening down the hatches, she runs towards those letters, to what they express, arms awkward and open.

To say any more about the plot would be to ruin the experience of the film. I kept waiting for it to pander, to explain, to judge. It doesn't. The best thing about it is that you literally do not know what will happen next. Christine Lahti shows up as a gossipy bank teller with a big laugh, who has been a business associate of Mr. McCauley for years. Their scenes together are amazing. Sabitha and Edith, young and cruel as they are, are also complex, creating their little game out of conflicting emotions, burgeoning hormones, and boredom.

Based on a short story by Alice Munro, "Hateship Loveship" is directed by Liza Johnson and shot by cinematographer Kasper Tuxen in a simple and unsentimental style. There is barely any score, and so moments stretch out in their silence, their awkwardness, and their huge unspoken feelings. When music does enter the picture, it is usually from the radio; George Jones or Tammy Wynette in the background. Delicacy is required with such material. Pushing for an emotional response from the audience, or underlining certain moments with music cues or closeups, would tip the film over into melodramatic soap opera. Johnson, instead, holds back. We see characters through doorways, as though we are eavesdropping, glancing in at a life that is going on whether the camera is pointing that way or not. This technique gives the characters room to breathe. Behavior can be unpredictable. Liza Johnson's direction allows for that and encourages it.

Kristen Wiig is a chameleon, and many of her comedic characters tap into a strain of tragedy that borders on the Greek. There is a great amount of empathy in her work. She enters into the experience of being another human being, and does so invisibly, without fanfare or wanting to be congratulated for her "bravery". In the short story on which the film is based, Alice Munro writes of Johanna: "It was the rare person who took to her, and she'd been aware of that for a long time." Wiig has absorbed that character description until Johanna seems as though a role she was born to play. There is not a hint of condescension in her portrayal. You worry for her. You are embarrassed for her. You feel protective; you wince at her openness. You keep discovering how much you have under-estimated her. It's a great performance. 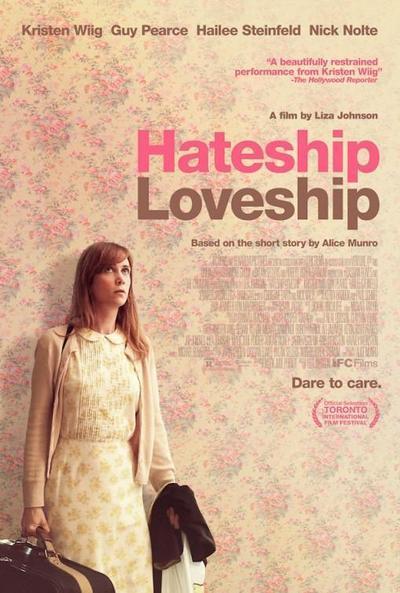 Rated R for drug use, some sexuality and language