"10,000 Saints," a coming-of-age film directed by Shari Springer Berman and Robert Pulcini (who adapted the script from Eleanor Henderson's novel) features a lot of the clichés we recognize from the genre. There's a love triangle. There's a breaking-away from parental influences as the kids create a makeshift family. It takes place in 1988-89, with the backdrop of New York City at that chaotic moment in its history: the Tompkins Square Park riots with violent stand-offs with police, the war against the homeless, Yuppies vs. the Squatters in the East Village, the new threat of AIDS, plus the post-punk searching/yearning in the subculture of the 'straight edge' music movement. That's a lot. But it's an extremely effective context for this particular story, told with no nostalgia, lots of humor, and a cast of really watchable characters. They are "types," for sure, but the types are given room to breathe. It's a sensitive and interesting film.

In the first scene, a young boy named Jude hangs out with his wild-child father, Les (Ethan Hawke) in the makeshift greenhouse in their Vermont backyard. Les is in the greenhouse, but also in the doghouse with his wife, and he opens up to his child son about it, all while lighting up a joint. The story he tells, of grown-up infidelity, is pretty heavy stuff to lay on your kid, but Les is clearly clueless. Then Les drops the bomb, so casually you might even miss it, that Jude was adopted. Jude looks shocked as his understanding of his young life shatters, and Les says in an encouraging way, "Aristotle was adopted! Lee Majors was adopted!" The scene is a prologue, but it's efficient in setting up the atmosphere of the film. And Ethan Hawke single-handedly makes the whole thing land.

The 8-year-old boy in the greenhouse grows up to be a teenager (Asa Butterfield), with a long lock of hair dangling over his entire face, pissed at his father (who has since abandoned the family and moved to New York City), and hanging out with his best friend Teddy (Avan Jogia), getting stoned and wandering aimlessly through the icy landscape of their neighborhood, dreaming of New York. Everything changes on one New Year's Eve, when Eliza (Hailee Steinfeld), the daughter of the woman Les is now dating in Manhattan, shows up for one night. Eliza arrives with the glamour of the city glimmering around her, and a little baggie of cocaine. Teddy and Jude hover beside her, entranced, slightly competitive for her attention. The night goes horribly wrong when Teddy freezes to death in the snow, but not before he loses his virginity to Eliza. She ends up pregnant, and her pregnancy launches everything that follows.

In the aftermath of Teddy's death, Jude's glass-blower hippie mother (Julianne Nicholson) sends him to New York to live with his dad. It's a strange choice, because Les a.) lives in a one-room rent-controlled cold-water apartment on St. Mark's Place, b.) spends most of his time hanging out with his posh ex-ballerina girlfriend (Emily Mortimer), Eliza's mother, and c.) sells pot for a living. But it's all part of the parental laissez-faire atmosphere in the film. The film is filled with abandoned children, adopted children, broken homes, vanished fathers. Les lays down some rules for Jude ("call if you're going to be late, don't stay out all night"), all as he lights up a bong and passes it across the table to his son. Jude starts to circulate in New York, looking up Eliza, and trying to find Teddy's brother Johnny (Emile Hirsch) who currently lives in an abandoned building in the East Village. With these two, Jude finds his "tribe."

Johnny is a tattoo artist (before that was a cool thing to do: Johnny mentions it being illegal in New York at that time) and a member of a band called Army of One. Army of One identify as "straight-edge", a subculture of the post-punk period, when certain bands reacted against the overindulgence of their predecessors. "Straight edge" musicians lived clean lifestyles (many were former addicts), and made it a point to not hit on every woman in sight at their shows. They were "pure", they were above sex/drugs/rock-n-roll.

Johnny is our entryway into that world. He's devastated at the death of his younger brother and becomes invested in Eliza's teenage pregnancy, taking a protective and almost fatherly attitude towards her. Johnny splits his time between band rehearsals and the Hare Krishna temple out in Brooklyn. Jude and Eliza trail along, going on mini-tours with Army of One, putting duct-tape X's on their hands (a "straight-edge" signifier). Jude, of course, has a huge awkward crush on Eliza. Johnny's "straight edge" mentality keeps him gentlemanly about whatever feelings he may have. Eliza is, in reality, an avatar. She's viewed through the gazes of all of the men in her life, and she knows it. She's 17, 18 years old, she's pregnant, her mother is furious at her. Everyone focuses so much on her unborn baby that she gets lost in the shuffle.

This cast of characters, Jude, Eliza, Johnny, Les, Jude's mother, Eliza's mother, intersect, explode, retreat, argue, make mistakes, bang on each other's doors, have extremely stilted "family" dinners where Les' cavalier comments stop the room. Normal suburban concerns do not come into play, although there are vague stabs at it. Between the hippies in Vermont, and the squatters in New York, these people are somewhat off the grid of mainstream American life, and they like it that way.

The setting is one of the most important factors in the film. New York in the 1980s, pre-Giuliani, was closer to the New York seen in "Midnight Cowboy," still filled with hustlers and hookers and peep shows ("live girls working their way through college" blared one neon sign at 40th and 8th) and graffiti covering everything. Garbage piles up on the streets. The homeless have created a tent city in Tompkins Square Park, and the imposition of a curfew (to control the homeless population) has resulted in riots and protests, growing in strength with every day. "10,000 Saints" portrays all of this believably, with only a couple of shots of stock footage (necessary since that neighborhood has changed so drastically). You get a visceral feel for that neighborhood in the film, its sense that unstoppable forces were moving in on them, running them out of town.

The script sometimes borders on the too-literary and symbolic (Jude's name, first of all, and the Book of Jude quoted at Teddy's funeral), but the acting is so solid, so fascinating to watch behaviorally, that it's not an issue. Ethan Hawke's performance will probably be compared to the one he gave in "Boyhood," but except for the fact that the character is a guy not really ready for the responsibility of fatherhood, they are two completely different characters. Les is a beautiful creation from Hawke, a compound of slightly-seedy charisma, narcissistic self-involvement, a genuine desire to hang out with his son, and a pleading "I'm doing the best I can" energy during confrontations. It's understandable why women like him, and why Jude's mother has not cut all ties with him.

Asa Butterfield, Emile Hirsche and Hailee Steinfeld beautifully meld together in their makeshift family. These people are kids, but they're trying to do right by one another. They have passions and obsessions outside of getting laid or getting high; they sit in the Hare Krishna temple and listen closely to the chants; they jump around slam-dancing at shows at CBGB's; they talk and argue and try to work things out. Johnny says, with no vanity, "There's nothing not to like about me." Unbelievably, and beautifully, Emile Hirsch makes us see the truth in that line. That's hard for an actor to deliver, especially in such a character which could come off as creepy or like he's up to no good.

As young as they all are, you can see why their parents feel willing to let them go. They're good people already. "10,000 Saints" respects kids like this. How a teenage pregnancy can be treated as a beautiful opportunity is one of the weird little miracles of the film: it makes sense. It's difficult, but it makes sense. The world is a total mess and often very dangerous. New York was starting to erupt along social, political and economic lines, and the Ground Zero for that confrontation was Alphabet City. The kids are in the thick of it. Seeing where "10,000 Saints" chooses to go, and how it chooses to go there, is the main unexpected pleasure of the film. It's not what you think. 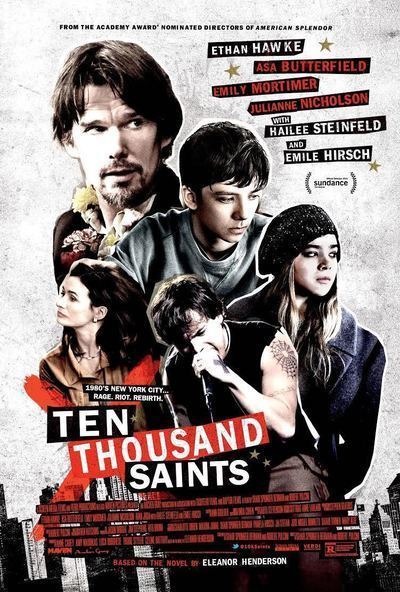 Rated R drug use including teens, and language including sexual references