Ever since he first burst upon the scene in 1988 with his hypnotic debut feature "Tales from the Gimli Hospital," Guy Maddin has been one of those filmmakers whose new work I most eagerly look forward to seeing. In a time when most movies are little more than filmed deals that can spend millions of dollars on elaborate special effects sequences that fade from the mind almost as soon as they play out, he has created some of the most bizarre, hilarious, haunting and memorable imagery that I have ever seen in a film—who could forget the sight of beer baroness Isabella Rossellini standing upon artificial legs filled with her own product in "The Saddest Music in the World," or the horses stuck in the middle of a frozen river in "My Winnipeg"? Even if the films themselves do not entirely work as a whole (not that this happens very often), one can always be certain that one or two moments that will go straight into your movie memory bank.

His latest film is "The Forbidden Room," co-directed with Evan Johnson. Even by Maddin's standards, it is a pretty wild ride in all aspects, starting with its very concept. From what I have been able to gather, the initial inspiration was a pair of museum installations in Paris and Montreal in which Maddin and a small crew would shoot a complete short film a day while the public looked on, and the resulting films are to be a part of a future interactive website project. The conceit behind the individual films is that they were all inspired by titles of old films that have either been lost or which were never made in the first place. Here, they have all been combined into a hallucinatory fantasia in which more than 18 different narratives bounce off of and flow into each other in unexpected ways, while Maddin presents them in a style reminiscent of the era spanning the end of the silent era and the beginning of the talkies.

The film opens with the faux-educational film "How to Take a Bath," in which a creepy old man instructs viewers on the finer points of bathing while we see people putting his theories into practice. From there, we journey to a submarine in imminent danger of disaster—the captain has gone nuts, a case of "explosive jelly" has gone bad and will blow up if the sub tries to surface, and there is only two days of oxygen left. (Luckily, the crew is able to extend their breathing time thanks to their all-pancake diet—they are able to consume the air bubbles contained in said griddle cakes.) The turmoil of the crew is interrupted by the inexplicable arrival of a novice lumberjack (a "saplingjack," if you will) with a story to tell about his efforts to rescue the fair Margot from a fearsome gang known as the Red Wolves—to infiltrate the gang, he must endure a series of trials that includes offal piling and bladder slapping contests. For her part, Margot soon disappears into her own dream world where she becomes an amnesiac flower girl, sings in a nightclub and lands on an island with volcanoes, squid thieves and a "Lost Generation attorney" with whom she has a brief lesbian affair.

Needless to say, there is much more. A surgeon who has spent virtually his entire life at the Oracle Bones Hospital and who is said to have "never been more than one hundred paces from the bones" saves a woman suffering from multiple bone fractures following a motorcycle accident—he takes her to an island paradise to propose, but at the last second is kidnapped by "The Skull-Faced Man and his gang of Skeletal Insurance Defrauders," all decked out in poisonous leotards. Other characters are somehow transformed into mutated bananas. A man forgets to get his wife a birthday present, and instead creates a ruse that requires him to murder his butler at one point. The family of the dead man hardly notices, and a recording of his voice winds up filling most of his usual duties. Another gift-related incident goes wrong when a man buys his beloved a statue of Janus, and winds up creating a malevolent double of himself dubbed "Lug Lug—Hideous Impulse Incarnate."

The end result is a head-spinner to be sure—not only does it not make any sense in the traditional definition of the word, it doesn't even attempt to do so—and those who demand that their films offer up some kind of conventional narrative structure will no doubt throw up their hands and leave early on in the proceedings. Those that stick it out, however, will be rewarded with one delight after another. Technically, it is a delight from start to finish that cinema buffs will adore for how Maddin and his crew have somehow managed to take something that was shot digitally and give it the look and feel of something shot around 1930 and misplaced soon afterwards. There is also a lot of wit on display here, with Maddin and his four co-writers deploying everything from jet-black humor to surreal silliness to pure and unadulterated goofiness and hitting their targets more often than not. In this regard, Maddin & Johnson have lucked into a cast that is for the most part on his particular wavelength, and are able to properly sell the oddball material. Among the familiar faces that pop up here, sometimes in multiple roles, are Udo Kier, Mathieu Amalric, Caroline Dhavernas, Geraldine Chaplin, Maria de Mederios and the divine Charlotte Rampling, an actress whose entire career has been dedicated to the kind of risk-taking spirit that this film celebrates in every single scene.

The only real flaw with "The Forbidden Room" is that it is pretty much the dictionary definition of the phrase "too much of a good thing." As anyone who has seen Maddin's stunning 2000 short film "The Heart of the World" (possibly the pinnacle of his career) can attest, he can cram more complex storytelling and memorable imagery into a few minutes of screen time than most filmmakers can muster in an entire career. That is certainly the case here but with a running time just under two hours, even Maddin's most ardent fans may find themselves getting exhausted after a while from the sheer onslaught of visual overload. And yet, while it might have gone down easier at a slightly reduced running time, I cannot easily think of anything in it that I would want to drop in order to achieve that goal.

"The Forbidden Room" is weird, esoteric, and probably not the ideal entry point for curious moviegoers who have not yet experienced the glory of a Guy Maddin film for themselves—those people might be better served with a look at "The Saddest Music in the World." For those who have enjoyed his work in the past and those who like to be a little adventurous when it comes to their moviegoing, this is the kind of audacious filmmaking that deserves to be recognized and which will no doubt inspire any number of impassioned discussions among its viewers while having dinner afterwards. Be sure to get the pancakes—you'll need them. 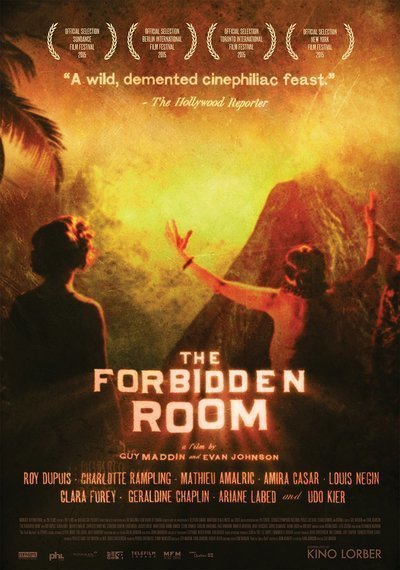 Charlotte Rampling as The Ostler's Mother