It’s de rigueur by now, of course, to break the final book in any juggernaut Young Adult series into two films. “Harry Potter” did it. “Twilight” did it. Why not tantalize and torment the fervent fans of these series even further? Why not make twice as much money?

So now we have the absolute, ultimate, this-time-we-mean-it finale of the “The Hunger Games” series, the clunkily titled “The Hunger Games: Mockingjay – Part 2.” But really, if we’re talking about things like art and narrative drive—which actually can and do exist in this franchise—a single film would have worked just fine. Last year’s “Mockingjay – Part 1” felt like one long placeholder. It featured a lot of wheel spinning and repetitive imagery, and it served as a glaring reminder of what a cynical cash grab this finale-splitting business truly is.

With the exception of a couple of truly dazzling action set pieces, “Mockingjay – Part 2” provides more of the same. The stakes are higher because this is the end—It really is this time!—but the first hour or so of returning director Francis Lawrence’s film is legitimately nap-inducing. From the very first moments, when Jennifer Lawrence’s Katniss Everdeen struggles to speak her name as the late, great Philip Seymour Hoffman looks on sadly as gamesmaker-turned-ally Plutarch Heavensbee, it’s just unrelentingly dour, even for a film set in a dystopian future. Mercifully, the script from Peter Craig and Danny Strong offers a few glimmers of sardonic humor, including quips from Jena Malone as Katniss’ fellow victor, the quick-witted Johanna.

It would be reasonable for us to hope for something better, however. Based on Suzanne Collins’ best-selling trilogy, “The Hunger Games” series has set the gold standard for all adaptations of post-apocalyptic Young Adult novels. “Divergent,” “The Maze Runner,” “The Giver”—regardless of when the actual books came out, they always seemed like knock-offs of “The Hunger Games” films in terms of narrative thrills, weighty themes, production values and star-studded casts. The presence of serious, seasoned actors like Hoffman, Donald Sutherland, Julianne Moore, Woody Harrelson, Stanley Tucci and Jeffrey Wright gave these movies a gravitas but also elevated them above your expectations for material aimed at angsty tweens. They were violent, exciting blockbusters but they were also About Something—at least the first two movies were.

Many of those stars get just a few lines in the finale—a curtain call of sorts, when you’d long to see more of them. The abbreviated presence of Hoffman, who died in 2014 of an accidental overdose, is heartbreaking. Tucci appears all-too briefly as unctuous television announcer Caesar Flickerman. Elizabeth Banks shows up in a couple of her typically outrageous outfits as stylist and social climber Effie Trinket, and that’s about it.

Lawrence herself already seemed to have outgrown the role of plucky teen Katniss Everdeen when “Mockingjay – Part 1” came out a year ago. By then, she’d won an Academy Award for “Silver Linings Playbook” and done diverse and dramatic work ranging from “American Hustle” to “X-Men: Days of Future Past.” It’s more than time for her to give a wistful, three-fingered Mockingjay salute goodbye to this character and this franchise once and for all.

But Lawrence takes this career-making role seriously, as always—and brings her usual, accessible mix of bravery and vulnerability—as Katniss prepares for the ultimate showdown with Sutherland’s diabolical President Snow in hopes of bringing an elusive peace to war-torn Panem. Leading up to that climactic moment at the Capitol are a lot of dreary strategic conversations in a lot of poorly-lighted, underground hideouts. For a movie about a society that’s on the brink of destruction, “Mockingjay – Part 2” features a lot of hurry-up-and-wait.

It picks up at the start right where “Part 1” left off, with Katniss reeling from an attack by brainwashed Capitol mouthpiece Peeta (Josh Hutcherson), her fellow former District 12 tribute-turned-fiancé. Merely serving as a symbol of hope in manufactured propaganda films is no longer enough, she realizes. She must join forces with her fellow rebels in their quest to bring down the totalitarian regime that has torn apart the land and taken so many young lives.

Among Katniss’ fellow fighters in Squad 451 (a number that may ring a bell with you from high school English class) are her hunky BFF and hunting buddy Gale (Liam Hemsworth, relegated to sulking and shooting); the charismatic Finnick O’Dair (Sam Claflin); tatted filmmaker Cressida (Natalie Dormer); and the all-business Boggs (Mahershala Ali), the soldier who’s the right-hand man of rebel President Coin (Moore, whose severe bob says everything you need to know about her trustworthiness).

Eventually, they also take in Peeta, who provides some poignancy as he’s clearly working through post-traumatic stress disorder. And as for the potential awkwardness of the Katniss-Gale-Peeta love triangle in close quarters, it’s to the film’s credit that the boys are the ones discussing it—and their respective roles within it—rather than Katniss herself. She’s got more important things to do, as she has throughout the series, like liberate a nation.

Along the way to the president’s mansion, they must avoid a series of “pods”—think of them as high-tech IEDs—scattered throughout the city. These obstacles provide the film’s few heart-pounding thrills. A wall of black ooze surges toward the rebel fighters, swallowing several of them whole in gnarly, ferocious fashion. But it’s the lizard mutt attack in the sewers that’s the film’s high point—or low point, if you want to get literal about it. Reptilian and ravenous, these fast-moving creatures are just devastating, and they add an element of paranoia and fear that the rest of the film desperately needed. (Seriously, I was curled up in a ball, watching this scene through my fingers. And James Newton Howard’s appropriately insistent score definitely ups the anxiety factor.)

I wouldn’t dream of spoiling how the whole series concludes. If you’re emotionally invested at this point, you should see it through for yourself, even if it’s a disappointment. But I will say that there’s a tacked-on, extra ending that’s needless and tonally inconsistent with everything that came before it. It’s a sun-dappled coda in a meadow that belongs in a different YA franchise (one with sparkling vampires, perhaps) when there’s a moment right before it that would have ended the movie, and the series, on a perfectly poignant and satisfying note.

Katniss may still be The Girl on Fire, but the flame has turned down to a simmer. 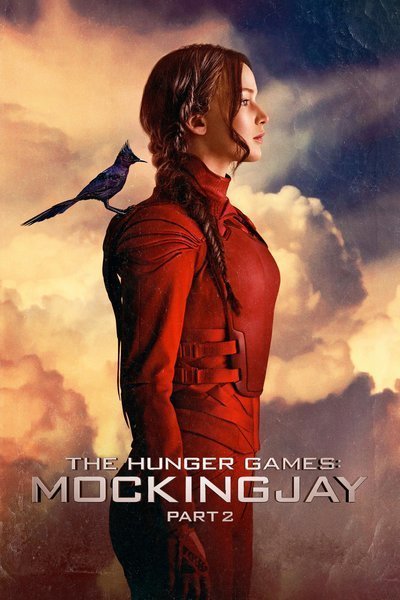 Rated PG-13 for intense sequences of violence and action, and for some thematic material.