Christopher Nolan’s "Interstellar," about astronauts traveling to the other end of the galaxy to find a new home to replace humanity’s despoiled home-world, is frantically busy and earsplittingly loud. It uses booming music to jack up the excitement level of scenes that might not otherwise excite. It features characters shoveling exposition at each other for almost three hours, and a few of those characters have no character to speak of: they’re mouthpieces for techno-babble and philosophical debate. And for all of the director’s activism on behalf of shooting on film, the tactile beauty of the movie’s 35mm and 65mm textures isn’t matched by a sense of composition. The camera rarely tells the story in Nolan’s movies. More often it illustrates the screenplay, and there are points in this one where I felt as if I was watching the most expensive NBC pilot ever made.

And yet "Interstellar" is still an impressive, at times astonishing movie that overwhelmed me to the point where my usual objections to Nolan's work melted away. I’ve packed the first paragraph of this review with those objections (they could apply to any Nolan picture post "Batman Begins"; he is who he is) so that people know that he’s still doing the things that Nolan always does. Whether you find those things endearing or irritating will depend on your affinity for Nolan's style.

In any case, there’s something pure and powerful about this movie. I can’t recall a science fiction film hard-sold to a director’s fans as multiplex-“awesome” in which so many major characters wept openly in close-up, voices breaking, tears streaming down their cheeks. Matthew McConaughey’s widowed astronaut Cooper and his colleague Amelia Brand (Anne Hathaway) pour on the waterworks in multiple scenes, with justification: like everyone on the crew of the Endurance, the starship sent to a black hole near Jupiter that will slingshot the heroes towards colonize-able worlds, they’re separated from everything that defines them: their loved ones, their personal histories, their culture, the planet itself. Other characters—including Amelia's father, an astrophysicist played by Michael Caine, and a space explorer (played by an un-billed guest actor) who’s holed up on a forbidding arctic world—express a vulnerability to loneliness and doubt that’s quite raw for this director. The film’s central family (headed by Cooper, grounded after the dismantling of NASA) lives on a corn farm, for goodness’ sake, like the gentle Iowans in "Field of Dreams" (a film whose daddy-issues-laden story syncs up nicely with the narrative of "Interstellar"). Granted, they're growing the crop to feed the human race, which is whiling away its twilight hours on a planet so ecologically devastated that at first you mistake it for the American Dust Bowl circa 1930 or so; but there's still something amusingly cheeky about the notion of corn as sustenance, especially in a survival story in which the future of humanity is at stake. (Ellen Burstyn plays one of many witnesses in a documentary first glimpsed in the movie's opening scene—and which, in classic Nolan style, is a setup for at least two twists.)

The state-of-the-art sci-fi landscapes are deployed in service of Hallmark card homilies about how people should live, and what’s really important. ("We love people who have died—what's the social utility in that?" "Accident is the first step in evolution.") After a certain point it sinks in, or should sink in, that Nolan and his co-screenwriter, brother Jonathan Nolan, aren’t trying to one-up the spectacular rationalism of “2001." The movie's science fiction trappings are just a wrapping for a spiritual/emotional dream about basic human desires (for home, for family, for continuity of bloodline and culture), as well as for a horror film of sorts—one that treats the star voyagers’ and their earthbound loved ones’ separation as spectacular metaphors for what happens when the people we value are taken from us by death, illness, or unbridgeable distance. (“Pray you never learn just how good it can be to see another face,” another astronaut says, after years alone in an interstellar wilderness.)

While "Interstellar" never entirely commits to the idea of a non-rational, uncanny world, it nevertheless has a mystical strain, one that's unusually pronounced for a director whose storytelling has the right-brained sensibility of an engineer, logician, or accountant. There's a ghost in this film, writing out messages to the living in dust. Characters strain to interpret distant radio messages as if they were ancient texts written in a dead language, and stare through red-rimmed eyes at video messages sent years ago, by people on the other side of the cosmos. "Interstellar" features a family haunted by the memory of a dead mother and then an absent father; a woman haunted by the memory of a missing father, and another woman who's separated from her own dad (and mentor), and driven to reunite with a lover separated from her by so many millions of miles that he might as well be dead.

With the possible exception of the last act of "Memento" and the pit sequence in "The Dark Knight Rises"—a knife-twisting hour that was all about suffering and transcendence—I can’t think of a Nolan film that ladles on misery and valorizes gut feeling (faith) the way this one does; not from start to finish, anyway.  The most stirring sequences are less about driving the plot forward than contemplating what the characters' actions mean to them, and to us. The best of these is the lift-off sequence, which starts with a countdown heard over images of Cooper leaving his family. It continues in space, with Caine reading passages from Dylan Thomas's villanelle "Do Not Go Gentle Into that Good Night": "Old age should burn and rave at close of day; Rage, rage against the dying of the light." (If it wasn't already obvious, this sequence certifies Nolan as the most death-and-control obsessed major American filmmaker, along with Wes Anderson.)

The film's widescreen panoramas feature harsh interplanetary landscapes, shot in cruel Earth locales; some of the largest and most detailed starship miniatures ever built, and space sequences presented in scientifically accurate silence, a la "2001." But for all its high-tech glitz, "Interstellar" has a defiantly old-movie feeling. It's not afraid to switch, even lurch, between modes. At times, the movie's one-stop-shopping storytelling evokes the tough-tender spirit of a John Ford picture, or a Steven Spielberg film made in the spirit of a Ford picture: a movie that would rather try to be eight or nine things than just one. Bruising outer-space action sequences, with astronauts tumbling in zero gravity and striding across forbidding landscapes, give way to snappy comic patter (mostly between Cooper and the ship's robot, TARS, designed in Minecraft-style, pixel-ish boxes, and voiced by Bill Irwin). There are long explanatory sequences, done with and without dry erase boards, dazzling vistas that are less spaces than mind-spaces, and tearful separations and reconciliations that might as well be played silent, in tinted black-and-white, and scored with a saloon piano. (Spielberg originated "Interstellar" in 2006, but dropped out to direct other projects.)

McConaughey, a super-intense actor who wholeheartedly commits to every line and moment he's given, is the right leading man for this kind of film. Cooper proudly identifies himself as an engineer as well as an astronaut and farmer, but he has the soul of a goofball poet; when he stares at intergalactic vistas, he grins like a kid at an amusement park waiting to ride a new roller coaster. Cooper's farewell to his daughter Murph—who's played by McKenzie Foy as a young girl—is shot very close-in, and lit in warm, cradling tones; it has some of the tenderness of the porch swing scene in "To Kill a Mockingbird." When Murph grows up into Jessica Chastain—a key member of Caine's NASA crew, and a surrogate for the daughter that the elder Brand "lost' to the Endurance's mission—we keep thinking about that goodbye scene, and how its anguish drives everything that Murph and Cooper are trying to do, while also realizing that similar feelings drive the other characters—indeed, the rest of the species. (One suspects this is a deeply personal film for Nolan: it's about a man who feels he has been "called" to a particular job, and whose work requires him to spend long periods away from his family.)

The movie's storytelling masterstroke comes from adherence to principles of relativity: the astronauts perceive time differently depending on where Endurance is, which means that when they go down onto a prospective habitable world, a few minutes there equal weeks or months back on the ship. Meanwhile, on Earth, everyone is aging and losing hope. Under such circumstances, even tedious housekeeping-type exchanges become momentous: one has to think twice before arguing about what to do next, because while the argument is happening, people elsewhere are going grey, or suffering depression from being alone, or withering and dying. Here, more so than in any other Nolan film (and that's saying a lot), time is everything. "I'm an old physicist," Brand tells Cooper early in the film. "I'm afraid of time." Time is something we all fear. There's a ticking clock governing every aspect of existence, from the global to the familial. Every act by every character is an act of defiance, born of a wish to not go gently. 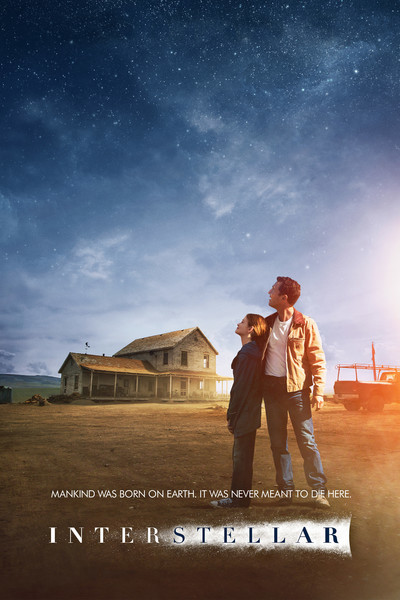