Writer-director Gillian Robespierre's "Obvious Child" arrives with the buzz of Sundance behind it, and the unfortunate buzz of being billed as the first "abortion comedy." Those words are a bit misleading. "Obvious Child" is definitely a comedy, and it also deals with abortion. But the approach is not glib or casual. It's a film that is really about the behavior of its main characters, the rhythms of conversations, the unexpected moments that surprise, and the sudden flashes of feeling that act as an ambush. It's a whirlwind. It touches on themes of arrested development, needing to grow up and to accept responsibility for who you are (both onstage and off, the film being about a standup comedian who uses her own life story in her act), but "Obvious Child" is not ponderous with these themes.

"Obvious Child" starts in a small stand-up club in Brooklyn, the kind of place with seven or eight tables and a unisex bathroom covered in graffiti. The comics who show up all have bigger dreams, they have agents, they just sold a pilot. The film opens with Donna (Jenny Slate) on-stage, in the midst of doing a set, one that is immediately disarming, honest and legitimately funny. It feels unscripted. It's a bit of a mess. Her delivery is spontaneous, even down to moments where she loses track of what she is saying and has to find her way back to the joke. She gets an enthusiastic response from the audience. But her boyfriend, smoldering in the back, feels differently about being used as a prop in her comedy, and breaks up with her.

The breakup scene is when I first sensed that "Obvious Child" was working on a unique wavelength. She is truly crushed at the turn of events. Donna is not just a wise-cracking broad, using her comedy to keep people at bay, or joke her way out of living a serious life (although that is part of it). Comedy is not pathologized here, although the impulse to get up and talk about your life in front of others is examined in interesting ways. Donna is vulnerable and that vulnerability is part of her act.

The concept of using one's life as fodder for your art is an underlying motif of "Obvious Child," and it comes back again and again, seen through different angles of the prism. Sometimes Donna hits it out of the park. Other times, like when she goes on-stage wasted, in the wake of the breakup, and rambles on incessantly to an increasingly embarrassed audience, she falls flat on her face. Donna is almost thirty, and still babied by her parents (Richard Kind and Polly Draper), she is a clerk in a bookstore called "Unoppressive Non-Imperialst Books," and lives with her roommate Nellie (an excellent Gaby Hoffman). One drunken night at the club, she goes home with a guy named Max (Jake Lacy), who is not a comedian, is in business school, and seems taken with Donna's aggressive brand of conversation (despite the fact that he also has a hard time keeping up with it). They cavort around. They laugh. They have sex. It's all a part of her breakup tailspin.

When she finds herself pregnant a couple of weeks later, she doesn't know what the hell to do. Max keeps showing up in her life. He seems to want to go on dates now. Should she tell him he got her pregnant? She barely knows him.

Unlike in Judd Apatow's "Knocked Up," with a similar circumstance and where abortion is not even mentioned by name (except for the cowardly "schma-shmortion"), "Obvious Child" is honest. There are moments of gallows humor. There are moments of deep pain and struggle. There's one great scene when Donna is in the back of a cab, and she decides to go talk to her mother so she asks the cab driver if he can turn around and go back to Manhattan. His response is rude, albeit in a cursory way, and yet she is so lost and scared that she dissolves into sobs in the back seat.

Slate manages to give us a character who has walls and a certain persona, and yet that persona constantly cracks. It's part of her act; it's part of what she "uses" for comedy. Her emotions come up against her will. When she is able to harness them, she is funny and even charming. When they get the better of her, she goes down with the ship. You can understand why Donna has loyal friends who put up with all of that. And it's also completely plausible that Max enjoys her so much. He's a subtext kind of guy. He listens to what isn't being said. He is not completely overrun by the onslaught of her wisecracks, and sometimes gives as good as he gets. He is taken aback by her dirty jokes, but isn't judgmental. "On the page," Max may seem like a cliche. But as portrayed by Lacy, he feels like a real guy, someone you've met, someone you know.

There are a couple of coincidences in the script that feel artificial, and there's a bit too much reliance on second-unit shots of Manhattan landscapes to get us from one scene to the next. But what is interesting here is the behavior, the subtext coursing beneath the text, the feeling that what comes up for these people is too big to be controlled, and yet they still try to control it. Romantic films, even good ones, often operate from cliche. "Obvious Child", an extremely self-aware film, acknowledges those cliches, and yet provides the characters a larger and more chaotic space to be themselves. The film is not anti-romantic. In many ways, it is extremely romantic. Watch Donna's reaction to when Max warms up the butter packets with his hands before giving them to her. It is an automatic gesture on his part, casual, and yet it says everything. She is nearly undone by the moment.

"Obvious Child" is Robespierre's first feature, and it is an incredibly confident debut. Watching all of these people listen, talk, behave, react, think, work stuff out…that's the genius of "Obvious Child," that's the strength and beauty of its unique wavelength. 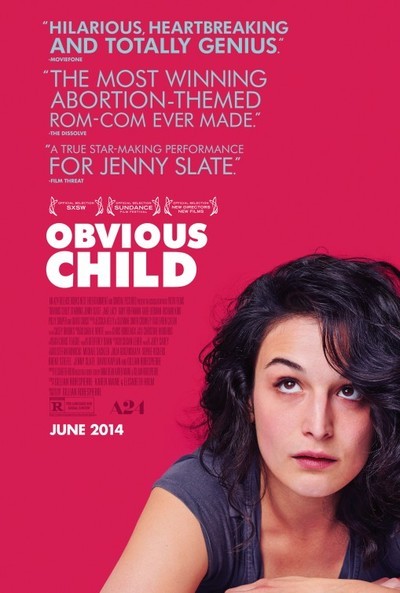