Dawn of the Planet of the Apes

"Dawn of the Planet of the Apes" is loud, smart and ferociously committed to its premise, and it leaves an intriguingly bitter aftertaste.  Like its predecessor, 2011's "Rise of the Planet of the Apes," it borrows situations and images from the 1960s and '70s "Apes" films and re-creates them as epic dramas. These new installments in the series aren't as satirical as the original "Apes" movies, but they're just as playfully political; the biggest difference is the sense of intimacy. The politics are personal, and they play out through the character of Caesar (Andy Serkis).

"Rise" portrayed Caesar as a victim turned rebel. His backstory fused the title character of "Flowers for Algernon"—about a simple man implanted with extraordinary intelligence by a scientist—with Spartacus. There were political elements in the script, mainly having to do with the ethics of animal testing. But for the most part "Rise" was a traditional hero's journey. It was about an ordinary ape realizing his extraordinary potential and becoming, pun intended, a guerilla warrior, inspiring his brothers and sisters to overthrow their human oppressors and make a homeland in the Northern California forest. The film's insistence on anchoring every event in strong, simple emotions—most of them originating in the constantly evolving character of Caesar—made "Rise" surprisingly intimate and wrenching. Caesar was your entry point into the story. You identified with him completely, as you did with King Kong, Frankenstein's monster and Dumbo. You felt his pain, and cheered when he stood up for himself.

The mostly excellent "Dawn" expands and complicates Ceasar's story by showing the aftermath of revolution, when the romance of rebellion has faded and boring old reality sinks in. Caesar and his fellow apes have settled in the forest amid remnants of a civilization cast into ruin by simian flu. A small group led by Gary Oldman, Jason Clarke and Keri Russell appears. These humans ask Caesar if they can please reactivate the dormant hydroelectric plant in the woods to restore power to San Francisco, where a few hundred plague survivors have settled amid stone-age squalor. They claim to seek nothing but peace and comfort. The humans' request sparks torment in Caesar and sets the plot in motion.

I've seen a few critics insist that "Dawn of the Planet of the Apes" is an allegory for the Israel-Palestinean conflict, and certain echoes of that real world tragedy may indeed be present; but for the most part, the film's allusions struck me as more general, like the contours of a fable intended to spark dreams and eventually lead to wisdom. There are echoes of the Old Testament (particularly the story of Cain and Abel) and the New, as well as post-Vietnam westerns that showed what happened when isolated bands (or tribes) of European settlers and Native Americans found themselves in the same territory, more or less evenly matched. In such situations, the groups were usually torn apart by internal conflicts, and that's what happens here. Caesar is a hero who led an ape uprising and has been canonized by his followers as sort of Geronimo or Fidel Castro of simian autonomy. But deep down he's more human-sympathetic than many of his kind, because his human "father" (James Franco, seen in "Rise") truly loved him. (Caesar is also gun-shy, or fist-shy, because his wife was injured in childbirth and can't heal without human medicine.)

In time, Caesar's divided soul becomes a metaphor for two families of sentient mammals angling for global dominance. Ape reflects man in these movies, and man ape. There's even a brazenly corny but effective bit of silent-film cross-cutting that draws correlations between characters that represent the diplomatic (or "accommodationist") attitude toward resolving conflict and the hardline approach. Caesar grapples with these conflicting impulses within himself even as they're externalized through his ape foil, Koba (Toby Kebbell), a scarred, bitter survivor of laboratory torture who once was loyal to Caesar but now thinks he's gone soft and is at risk of becoming a species traitor. Their conflict is mirrored in the struggle between Clarke's Malcolm (the human Caesar) and Oldman's Dreyfus (who seems reasonable at first, but reveals himself as Koba's counterpart).

The direction, by Matt Reeves of the soulful vampire remake "Let Me In" and the half-magnificent, half-lame found footage monster flick "Cloverfield," strikes a marvelous early Spielberg vibe, alternating humor and terror with plot-motivated directorial flourishes (including a "Children of Men"-style tracking shot through an ape-infested warehouse and a hair-raising ride atop the turret of a tank). The script, credited to Mark Bomback, Rick Jaffa and Amanda Silver, makes for muddy allegory, perhaps purposefully so (though its attitude toward guns is less editorial-page modern than many have claimed), and it has major flaws, including a too-typical things-crashing-into-other-things summer movie climax, flat human characters (compared to the apes), and a dearth of notable females (this is biologically defensible on the apes' side of the story—maybe—but certainly not on the humans'). And yet the script satisfies because it's fair to every character. You understand Caesar's and Koba's and Malcolm's and Dreyfus's points-of-view even when they're making destructive choices. And when you trace the chain of events that leads to the third act's man/ape showdown, you realize it's impossible to say for sure which side "started it."

Fans of the collaborative performance between Serkis and the special effects wizards of "Rise" might think it impossible that we could be drawn deeper into this character's heart. Amazingly, that's what happens. Serkis is a towering figure in screen acting who is to 21st century cinema what Lon Chaney, Sr., was to the early 20th. Chaney deformed his face and body with masochistic makeup effects, while the CGI artists distort Serkis'; otherwise the sorcery is similar. It would be wrong, though, to downplay Serkis' personal charisma and craft. He's made specific, clever choices here, and they help you see a unique person—or creature, or being—behind the digital facade. Caesar's energy is so 1960s samurai-picture that I wouldn't be surprised to learn that the actor had Toshiro Mifune's face tattooed on his back. You sense the character's tangled and volatile feelings even as he presents himself to his followers as a strong/silent warrior-statesman. The CGI gorilla-face on Serkis is one kind of mask. Caesar's tactical self-presentation is another. (Koba shows off a similar false front in scenes where he does a simian shuck-and-jive routine to throw stupid humans off-guard.)

"Dawn" shows Caesar grappling with the irritations and agonies of leadership. During moments of impending and erupting violence, some of which have an almost midnight-movie ugliness, the film's pop-operatic boldness and orange-brown torchlighting fuse with the weirder parts of composer Michael Giacchino's score (like a calliope heralding a circus in hell) to suggest that we are watching the simian cousin of Francis Ford Coppola's mob trilogy. If "Rise," about the unlikely savior of an endangered clan, was "The Apefather," then this sprawling, messy, often sad sequel is "The Apefather, Part II," turning brother against brother (on both the human and ape sides of the dramatic fence) in a war for resources and turf. The film starts and ends with rhyming closeups. The first promises a gentle and hopeful future, the second certifies that the tribe's survival must be purchased at the cost of its soul. Heavy hangs the furry head that wears the crown. 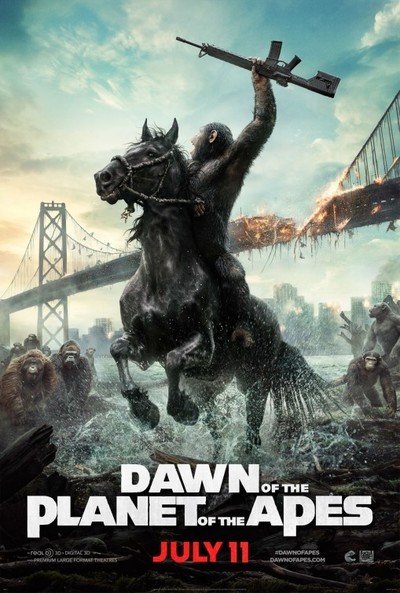