Everything in "The Lego Movie" is, indeed, awesome.

Awesome as in imagine if "Toy Story" were spoofed by Mel Brooks after he ate magic mushrooms while reading George Orwell's 1984.

Awesome as in the sort of silly yet wily kid-appropriate PG-rated performance by Will Ferrell that you've been waiting for ever since "Elf" came out more than a decade ago.

Awesome as in geeking out over the sight of a grim little Batman hitching a ride on the Millennium Falcon piloted by a smart-ass little Han Solo—with a suavely plastic Lando Calrissian in a flash of a cameo.

To be honest, my enthusiastic reaction might be slightly skewed by the fact that "Everything Is Awesome" is both the title and most insidious lyric of a catchier-than-a-Norovirus musical number whose sweeping camerawork over a Lego-ized cityscape is almost as impressive as the opening sequence of "West Side Story". Somehow, the dastardly ditty has taken up permanent residence in my brain, snaking into the cubby hole previously occupied by the Pee-wee's Playhouse TV-show theme.

Normally, I oppose the trend of plaything-based moviemaking, especially when the results are as brain-numbingly awful as "Transformers", "G.I. Joe" and "Battleship". But if those uninspired efforts had featured not just Michelangelo the Teenage Mutant Ninja but also Michelangelo the ultimate Renaissance artist as they fight for the greater good of interlocking mankind, maybe they would have changed my mind, too.

Besides, with so many animation powerhouses settling for easy-money sequels lately (we mean you, Pixar, DreamWorks, Universal and 20th Century Fox), it is exceedingly cool that a major-studio family film refuses to simply capitalize on merchandising spinoffs by offering an oppressive 100-minute commercial. Instead, "The Lego Movie" manages to be a smartly subversive satire about the drawbacks of conformity and following the rules while celebrating the power of imagination and individuality. It still might be a 100-minute commercial, but at least it's a highly entertaining and, most surprisingly, a thoughtful one with in-jokes that snap, crackle and zoom by at warp speed.

This surreal 3-D computer-animated pop-cultural cosmos overseen by directors/co-writers Phil Lord and Chris Miller, the talented team behind 2009's "Cloudy With a Chance of Meatballs", takes off from those countless amateur fan-produced stop-motion films found online before concluding with rather ingenious live-action interlude.

For once, an overly familiar plot is intended to be overly familiar as this action comedy lampoons nearly every fantasy-sci-fi-comic-book-pirate-cowboy movie cliché that has been in existence at least since George Lucas and Steven Spielberg turned Hollywood into a blockbuster-producing boy-toy factory.

Our unlikely hero is Emmet (earnestly and engagingly voiced by Chris Pratt of TV's "Parks and Recreation"), an unremarkable construction worker who is perfectly happy with his staid generic existence as an ordinary citizen of the metropolis of Bricksburg. As is the custom among his peers, Emmet doesn't just avoid overthinking. He barely thinks at all.

But after dawdling on a work site after hours, Emmet finds himself tumbling into an underworld where a wise Obi-Wan Kenobi-type wizard named Vitruvius (Morgan Freeman, mocking his history of movie mentorships) mistakenly declares him to be the Special, the greatest Master Builder of them all. Unfortunately, special is exactly what Emmet isn't and he appears to be ill-equipped to battle the monstrous foe at hand. That would be Ferrell's President Business, a maniacal manipulator whose looming overlord alter-ego is a sly nod at the actor's despot in "Megamind".

The minute that a swivel-headed henchman named Bad Cop/Good Cop starts spouting menacing threats in Liam Neeson's Irish-inflected rumble, you know that a "release the Kraken!" joke can't be far behind. And "The Lego Movie" does not disappoint, as Ferrell's control-freak villain aims to glue all the pieces of the city in place permanently—no freeform deviations allowed.

It isn't fair to reveal what happens next, other than to say that it continues to be, yes, awesome despite a paucity of female characters (toothache-sweet Unikitty who presides over Cloud Cuckoo Land doesn't quite count) and maybe a bit too much crash-boom bombast.

Alas, I would be remiss if I didn't issue a heads-up to parents: "The Lego Movie"'s tie-ins include 17 new building sets and 16 new characters. To ensure that your child's college fund is safe and your bills get paid this month, I would urge you to seek out a theater in a galaxy far, far away from a toy store. 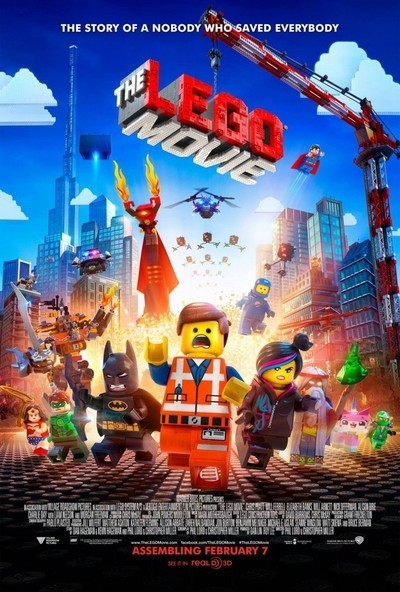 Will Arnett as Batman (voice)

Will Ferrell as President Business (voice)