The second shot of "Boyhood" doubles as the movie's poster image: a young child named Mason, Jr. (Ellar Coltrane) lying on his back in green grass, staring at the sky. He does not speak and there is no voice-over narration, so we cannot know what's in his head. But the movie is contemplating, among other things, the fleeting nature of existence—the way that time, to quote "Life Itself," slips through your fingers like a long silk scarf.

"Boyhood" became the instant subject of media buzz last year when Linklater revealed that he'd been working on the project for 12 years, following the same actors (including Patricia Arquette and Ethan Hawke as the hero's parents, Olivia and Mason, Sr., and the director's daughter Lorelei Linklater as his sister Samantha) through the early part of the 21st century. We watch the children grow up and the adults thicken and grey. We see Olivia and Mason, Sr. in various relationships. Olivia is looking to replace her ex-husband and make her "broken" family intact again, and this search leads her into a series of arrangements that are wrong for her, sometimes horribly so. Mason, Sr., goes the other way, acting the role of bohemian free-spirit even as he works a series of rather typical jobs. The kids get taller and become interested in particular subjects, and in sex, and after a while they start to think about college and what they want to do with their lives.

It's all a blur. The blur is indescribably moving. We've seen people age in movies and on TV programs—the kids in the "Harry Potter" and "Up" series, for instance, and little Ronny Howard on "The Andy Griffith Show," and Kiernan Shipka on "Mad Men"—but we've never seen it happen in such a compact span of screen time. That's what makes "Boyhood" singular. There is no other work to which one can directly compare it without distorting pop culture history. This movie is truly its own thing, as eccentrically unique as Linklater's breakthrough "Slacker," another Austin-set feature to which "Boyhood" feels (curiously) like a companion piece, or perhaps a bookend.

Mason is a child of divorce. He and his mother and his sister move around a lot, all over Texas, a U.S. state as big as France. Mason's dad does not have custody, so has to accommodate his wife's shifts in geography over the years, sometimes driving hundreds of miles to see his children.  Even though Olivia and Mason, Jr. love their kids, there are moments when they resent them, because once they had them they were locked into a particular track and had to put their kids first, always. The trick, though—and this is where Linklater the writer shows how generous and kind he is—lies in realizing that sometimes when parents think they're putting their kids first they're really responding to conditioning, or doing what their society or their gender or their parents told them was the correct thing to do.

The movie's about social conditioning as well as time. It asks basic, deep questions. What makes us "normal"? Is there such a thing as "normal"? What makes us identify as men, as women, as children? Is the traditional domestic arrangement—a wife, a husband and kids living in the same house—really desirable for every person, and genuinely good for society, or does it inflict distress on those whose personalities and desires cannot function within it? Two important men in Olivia's life have drinking problems; alcoholism is a disease, but it's also a means of forgetting, of numbing pain, of denial.  Do we really change over time? Can we decide to change ourselves? Or is free will an illusion?  Do we seize moments or do moments seize us? ("You are responsible for your own actions," warns a sign hanging in the hero's elementary school.)

Olivia seems, like many single moms, dispirited by the the responsibilities she bears. Early on we hear her arguing with her boyfriend, a single man who resents that she can't just come and go as she pleases, as he does. ("I was somebody's daughter, and then I was somebody's fucking mother," she says.) She's chasing an idea of normalcy that may not be right for her. In an intense scene that occurs in a car outside of a school, not long after a period of domestic strife, Olivia asks for understanding because she's trying to build "a family" with a new boyfriend, and Mason exclaims, "We already have a family!"—and he's right. Olivia is a college professor and a liberal feminist, but she's still bought into the husband-and-wife-and-two-kids-equals-a-real-family thing. She studies "unconditioned response" in one of her grad school courses but it takes a few years for her to figure out, in practical terms, what the phrase means.

There are points near the end of "Boyhood" when Olivia might remind you of George Bailey, the hero of "It's a Wonderful Life." Of the movie's two parents, she is nearly always the responsible one—the "boring" one. Even her worst decisions were made for noble reasons, but the constraints that motherhood placed on her freedom always gnawed at her. Over time, though, she grows by leaps and bounds, finishing grad school and becoming a teacher and then a person of considerable influence in her community. We start to see the profound, lasting impact that her moral rectitude has had on the world. She evolves, as surely as her ex-husband and children evolve, but the process is subtler. It's not right out there, like her ex-husband's delayed maturation.

The film's title and choice of protagonist have been criticized (gently but firmly) for unthinkingly confirming that heterosexual men are at the center of the universe. But this reading ignores the movie's constant (if empathetic) critique of American manhood, or what passes for American manhood: an entitled mental state that is really just boyhood with money and a driver's license. Mason, Sr., for all the love that he shows his kids, is an example of this. He's a great natural playmate for his son and daughter, joining them on the floor as they futz with toys and taking them on camping trips and trying to purchase their love with gifts as if every visitation were a miniature Christmas. But he doesn't express much real wisdom until his kids edge toward adolescence and become tight-lipped and undemonstrative, and he pulls the car over during a family trip to demand that they have real conversations (amusingly, Samantha makes the same request of him).

He has to learn to give in as well as to give—and that giving in doesn't always have to mean giving up. Even when Mason, Sr. is 30 or 40 he still lives like a 19-year old who just got his first place. He resents his ex-wife as a killjoy, and clings to his GTO the way little boys cling to their loveys. And yet he matures onscreen along with his kids, mellowing over the years and becoming less strident and arrogant and more generous, learning that it's possible to be a person of integrity even if you aren't insisting that every single thing go your way at every single moment (a pattern of behavior that only narcissists mistake for freedom). We get the sense that in some ways Mason the elder is un-learning what he learned during the first part of his life—an experience that his kids are now going through, with different details. It's rough, this process. It's emotional boot camp, with versions of hazing. And I love how "Boyhood" admits that, in certain ways, growing up stinks. Every character has a least one moment in which they have to heed the advice of Corinthians and put away childish things. None of them like it.

The adults in Mason, Jr.'s orbit (including his mother and father and various teachers and authority figures) all want to parent or mentor him by turning him into reflections or extensions of themselves. In high school, a photography teacher tells the budding shutterbug hero that he needs to move away from arty compositions and learn to shoot sports so that he can make a living, advice which assumes that Mason, Jr. wants to earn a living with photography rather than treating it as an avocation, or as the visual version of a diary. The manager of a restaurant where Mason, Jr. works as a dishwasher wants to groom him as a fry cook. The man's eyes light up as he describes this arc, as if he's moved by his own generosity.

At various points during the boy's life he's pushed toward bad decisions by other boys who warn him that failure to act a certain way makes him a "fag" or a "pussy." You sense the kid pushing back against these pressures. You realize that, for all their faults, and despite the geographical and emotional obstacles that they were up against, his parents did a good job raising him. Or maybe he absorbed their better qualities as if by osmosis. (Did he seize their better qualities, or did their better qualities seize him?) Linklater doesn't explain any of this—the storytelling and filmmaking are intuitive; things that look like pointers or labels aren't—and yet it's all there in the movie. You can feel it. Perhaps without meaning to, the film exemplifies the best piece of advice that anyone gives the hero: "We're all just winging it."

"Boyhood" is broken into discrete dramatic chunks—this is really an anthology of short movies with a recurring cast—and there are no timestamps telling us that we've passed from 2002 into 2003 or from 2009 into 2010. We realize where we are on the timeline when we hear somebody talking about the Iraq war, or hear a song on the soundtrack that was big during a certain year, or realize that the boy has changed his haircut or gotten a little bit taller. The simultaneously nourishing and corrosive effects of time make the film quietly moving and humble-seeming, despite its three-hour length and conceptual audacity. Time is what makes the film cohere even when particular scenes, images or performances seem clunky or undernourished. Fixating on imperfections while discussing "Boyhood" would be as petty as criticizing the sculpting of individual stones in a cathedral. The totality matters. Even more important is our recognition that the totality is as fleeting as life.

Time, and our interaction with time, and the way in which we are all ultimately overmatched and worn down by time, and the notion of cinema as a means of sculpting with time: these and other aspects of temporality are at the heart of "Boyhood." Time is the core around which all of this movie's musings on childhood and parenthood are woven. It's the river down which the scenes and characters travel without consciously realizing that they are on individual journeys that all have the same ending. If life is "about" anything, it's about realizing and accepting that fact: that everything is fleeting. Time gives birth and nourishes and then obliterates as it moves ahead, like the family which, in an early scene, prepares to move out of a house by covering murals and hand-lettered height charts with white paint. The film ends and the credits come up and you ask the same question that you ask at the end of an evening spent with old, dear friends: where did the time go? 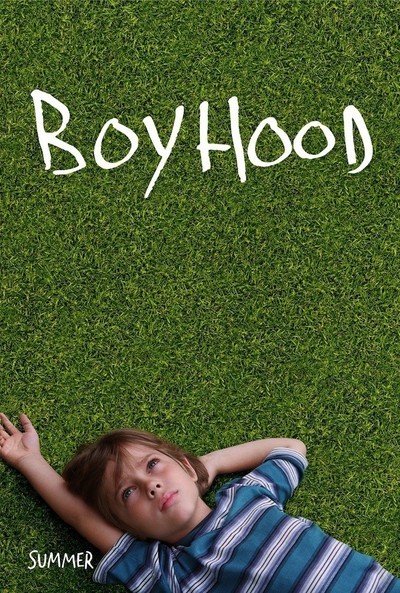 Rated R for language including sexual references, and for teen drug and alcohol use