"Edge of Tomorrow" is less of a time travel movie than an experience movie; that statement might not make sense now, but it probably will after you've seen it. Based on Hiroshi Sikurazaka's novel "All You Need is Kill", it's a true science fiction film, highly conceptual, set during the aftermath of an alien invasion. Maybe "extra-dimensional being invasion" is more accurate. The fierce, octopod-looking beasties known as Mimics are controlled hive-mind style by a creature that seems able to peer through time, or rupture it, or something. When the tale begins, we don't have exact answers about the enemy's powers (that's for our intrepid heroes to find out), but we have a solid hunch that it can see possible futures through the eyes of specific humans, then treat them as, essentially, video game characters, following their progress through the nasty "adventure" of the war, and making note of their tactical maneuvers, the better to ensure our collective extermination.

Tom Cruise, who seems to be spending his fifties saving humanity, plays Major William Cage, an Army public relations officer. Cage is a surprising choice for the role of hero. He's never seen combat yet inexplicably finds himself thrown into the middle of a ferocious battle that will decide the outcome of the war. The film begins with Cage en route to European command headquarters in London, waking up in the belly of a transport chopper. The rest of the movie may not be his dream per se, but at various points it sure feels as though it is. The world is wracked by war. Millions have died. Whole cities have been reduced to ash heaps. The landscapes evoke color newsreel footage from World War II, and much of the combat seems lifted from that era as well.

When Cage meets the general in charge of that part of the world's forces, he's told he's being sent right into this movie's version of D-Day and is to report for duty immediately. No amount of protest by Cage can halt this assignment, and soon after he joins his unit and learns the rudiments of wearing combat armor (this is one of those science fiction films in which soldiers wear clumping bionic suits festooned with machine guns and other weapons) he dies on the battlefield. Then he wakes up and starts all over. Then he dies again and starts over again. He always knows he's been here before, that he met this person, said that thing, did that thing, made a wrong choice and died. Nobody else does, though. They're oblivious to the way in which Cage, like "Slaughterhouse Five" hero Billy Pilgrim, has come unstuck in time.

Cage's only allies are a scientist (Noah Taylor) who believes the creatures are beating humanity through their mastery of time, and Rita Vrataski (Emily Blunt), an Audie Murphy or Sgt. York type who's great for armed forces morale in addition to being an exceptionally gifted killer. Rita has experienced the same temporal dislocation that Cage is now experiencing, but at a certain point it stopped. She recognizes his maddening condition but can no longer share in it. She can, however, offer guidance (and a key bit of information that defines his predicament), and speed up the learning curve by shooting him in the head whenever it becomes obvious that they're going down a wrong road that'll lead to the same fatal outcome.

Although the film's advertising would never dare suggest such a thing, for fear of driving off viewers who just want the bang bang-boom boom, Cage is a complex and demanding role for any actor. It is especially right for Cruise, in that Cage starts out as a Jerry Maguire-type who'll say or do anything to preserve his comfort, then learns through hard (lethal) experience how to be a good soldier and a good man. He changes as the story tells and retells and retells itself. By the end he's nearly unrecognizable from the man we met in the opening.

Cruise is hugely appealing here, not just in the early scenes opposite Gleeson in which he's in Tony Curtis mode—he's always fantastic playing a smooth-talking manipulator who's sweating on the inside—but later, where he exhibits the sort of rock-solid super-competence and unforced decency that Randolph Scott brought to Budd Boetticher's westerns. He was always likable, sometimes perfect in the right role, but age has deepened him by bringing out his vulnerability. There's an existential terror in his eyes that's disturbing in a good way, and there are points in which "Edge of Tomorrow" seems to simultaneously be about what it's about while also being about the predicament of a real actor trying to stay relevant in a Hollywood universe that's addicted to computer generated monsters, robots and explosions. Cruise deserves some sort of acting award for the array of yelps and gasps he summons as he's killed by a Mimic or shot in the head by Blunt and then rebooted into another version of the story.

The rest of the cast has less to do because this is Tom Cruise's movie through-and-through, but they're all given moments of humor, terror or simple eccentricity. Taylor often gets cast as brilliant but haunted or ostracized geniuses, and he's effective in another of those roles here. Gleeson, as is so often the case, invests a rather stock character with such humanity that when the character's motivations and responses change, you get the sense that it's because the general is a good and smart man and not because he's just doing what the script needs him to do. Emily Blunt is unexpectedly convincing as a fearless and elegant super-soldier, and of course a magnificent camera subject as well. Director Doug Liman is so enamored with the introductory shot of her rising up off the floor of a combat training facility in a sort of downward facing dog yoga pose that he repeats it many times. The film's only egregious flaw is its attempt to superimpose a love story onto Cruse and Blunt's relationship, which seems more comfortable as a "Let's express our adoration for each other by killing the enemy" kind of thing.

There's no end to the number of films and novels and other sources to which "Edge of Tomorrow" can be likened. "Groundhog Day" seems to be everyone's reflexive comparison point, but Liman's elaborately choreographed tracking shots and unglamorously visualized European hellscapes evoke "Children of Men," the creatures themselves have a touch of the Sentinels from the "Matrix" films, and the monsters-vs.-infantry scenes will remind you of James Cameron's "Aliens" and its literary predecessor "Starship Troopers." (Bill Paxton, one of the stars of "Aliens," plays Cage's drill sergeant, a mustachioed Kentucky hard-ass with an amusingly sour sense of humor.)   It's also an exceptionally brutal film, so bone-and-skull-crushingly violent and fairy-tale frightening that its PG-13 rating is stupefying. Parents should avoid taking young children who'll be both confused by the fractured narrative and terrified of the Mimics, nightmare creatures that look like razor-tentacled squid and roll across the landscapes like tumbleweeds.

In all, though, "Edge of Tomorrow" is its own thing. One of its most fascinating qualities is its keen judgement of the audience's learning curve. The early sections of the film repeat scenes and dialogue until you get used to the idea of the story as a video game or movie script, but just when you start to think, "Yes, I get it, let's move on," the film has in fact moved on and is now leaving things out because they're not necessary. By the end of the movie the script—which is credited to Christopher McQuarrie and Jez and John Henry Butterworth—has gotten to the point where it's tactically withholding information and waiting for us to figure things out on our own. It repeats key images and lines near the end as well, but always for good reason. When you see the familiar material again you feel different about it, because its meaning has changed. The movie has an organic intelligence and a sense that it, too, exists outside of linear time. It seems to be creating itself as you watch it. 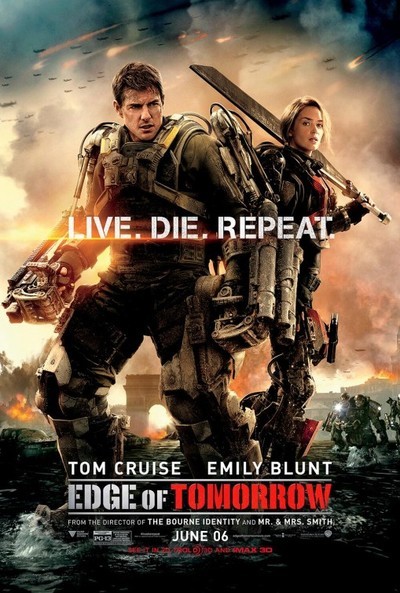