Guardians of the Galaxy

You wouldn’t know it to look at me now, but there was once a time when I had quite a bit of expertise in the Marvel Universe. I came as close to tearing up while reading a comic book as I’ll ever do when the Scarlet Witch finally married The Vision­—as eloquent an argument for marriage equality as genre fiction has ever essayed, by the way. I did, I must admit, check out well before the entity called The Guardians of the Galaxy turned up in said universe. I bring this up because there are some MU characters in the movie "Guardians of the Galaxy" that I did recognize—super-evil demigod Thanos, Drax The Destroyer, and one or two others I guess—but I ultimately found that it was that particular continuity, the need to tie this movie’s adventures into something larger, that made the movie lag a bit.

In many respects, “Guardians,” directed and co-written by indie wit James Gunn, and starring buffed-up former schlub Chris Pratt and Really Big Sci-Fi Blockbuster vet Zoe Saldana (here dyed green as opposed to her "Avatar" blue), is a fun and relatively fresh space Western. Think “Firefly” pitched at 15-year-olds, with a lot of overt "Star Wars" nods. And super-“irreverent” dialogue that is, more often than not, genuinely funny. The wisecracking by the characters played by Pratt (a kind of junior Han Solo) and voiced by Bradley Cooper (whose Rocket Raccoon, who is, yes, a genetically altered raccoon) is so incessant viewers of a certain age might wonder whether this movie has been put through the "What’s Up Tiger Lily" dialogue-replacement treatment before release.

Pratt’s self-styled “Starlord” and Rocket are not the strangest of initially inadvertent teammates in this intergalactic posse. Saldana’s Gamora is a stealthy warrior princess who’s been lying low in an evil family before revealing her good intentions; wrestling star Dave Bautista’s Drax is a vengeance-driven behemoth whose florid language only briefly masks his inability to take anything other than literally; and Rocky’s “muscle,” Groot, is a walking, minimally talking tree. These guys are entertainingly motley, which makes the fact that their mission, to save the universe from a mass-murdering megalomaniac who seeks an item which will grant him unimaginable mass-murdering power (yes, more mass-murdering power than he ever had before), is generic in a way that’s pretty consistent with movies of this sort.

You may have noticed, incidentally, that a lot of film critics tend to get kind of defensive when reviewing movies based on comic books. Like, you probably noticed that up top I tried to claim some comic book-respecting bonafides. I’ve done this thing before when reviewing comic-book movies. Some day, I may have to actually bring out the big guns, like the fact that I used to be palsy with Mike Kaluta, or that I once went to a Halloween party at Berni Wrightson’s house. I don’t do this because I’m afraid of getting death threats from easily irritated comic book fans (which hasn’t happened to me, and thanks). I do it because as someone who got a lot out of comics growing up, and still has a healthy respect for the graphic form, I find comic book movies kind of frustrating, and am bent out of shape by having my frustration chalked up to a lack of understanding of the form.

What does this have to do with “Guardians?” It ties into what I mentioned before. While this movie is pretty lively in a lot of its particulars, the stilted portent with which its villains—the bumpy-jawed Thanos (Josh Brolin, not that you can tell) and the megalomaniacal Ronan (Lee Pace)—make themselves felt is pretty tired. The “funny animal” tribute/homages of “Guardians” bump up uncomfortably against the faux-majesty of the bad guys in a way that the actual comic-book form is malleable enough to at least sidestep. I think Gunn knows it, too: one of the movie’s only genuinely subversive jokes sees one of the heroes actually yawning in the pro-forma slow-motion “walk to destiny” shot that heralds the movie’s climax. Which climax is, as is also pro forma, big and loud and filled with indiscriminate destruction and slaughter of sentient beings. But as it takes place on a planet other than the one the audience is on and so doesn’t involve the razing of a recognizable city, it’s a little less troubling than it might have been.

It seems as if I’m listing a lot of not-fun things in what I’ve called a fun movie, but again, I’m just voicing some frustration because, in my puny mind—which can only imagine the extent to which Gunn and his team had to fight for every bit of creative license they were allowed—the not-fun parts seemed entirely avoidable. What will win the day among those not given to overthinking will be the charm of the cast—which also includes Benicio Del Toro in a bit role that allows him to exercise a generous amount of his legendary performing eccentricity, and Michael Rooker in a gruff part that would have gone to Ron Perlman had Guillermo Del Toro directed the movie—the sunniness of its eventual optimism, and the infectiousness of its vintage-Earth-pop soundtrack. A soundtrack the film’s characters appreciate as much as the audience will, which is part of the whole point. 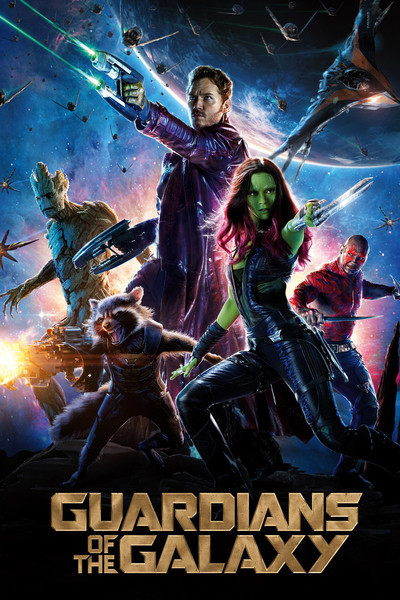 Rated PG-13 for intense sequences of sci-fi violence and action, and for some language

Dave Bautista as Drax the Destroyer

Lee Pace as Ronan The Accuser

Djimon Hounsou as Korath the Pursuer