In Ruben Östlund’s sharp-edged marital drama “Force Majeure,” a young Swedish family–mom, dad, two grade school age kids–begin their skiing vacation in a French Alpine resort in typical holiday high spirits. The first day on the slopes, they pause to have their pictures taken en famille by a tourist photographer, as if to acquire tangible evidence of their sentimental solidarity and joy at outdoorsy togetherness.

Then, on the vacation’s second day, something extraordinary happens. They are having lunch at the resort’s rooftop restaurant when, just after their food has been served, they hear a loud report from the mountain above them, and snow begins to topple down the slopes. It’s a controlled avalanche, a common thing in ski resorts, but this one quickly comes to seem excessive, as if it’s not under control at all.

Due to the ensuing confusion, it’s easy to miss exactly what happens next on a first viewing of the film. But it is the crux of the story: Fearing they’re about to be engulfed by the avalanche, many diners react in panic, and the Swedish father, Tomas (Johannes Bah Kuhnke), jumps up and flees the deck, leaving his wife and kids at the table. Fortunately, the avalanche stops short of the restaurant, though it sends up a billow of snow that whites-out the scene for a minute or two. Though terrified briefly, the diners soon resume their lunches. But the appearance of no-harm-done is illusory, at least in the case of the Swedish family.

Tomas at first is puzzled that his wife Ebba (Lisa Loven Kongsli) appears irritated at him. What reason could she have? Rather than saying, she shrugs it off. Their kids seem annoyed at both parents. But the real rub comes when the parents have dinner that night with another couple. Ebba tells the story of the avalanche, and how Tomas abandoned his family to save himself, taking his cell phone but not his son. Tomas flatly denies he did any such thing. It never happened, he says, adding defensively that he and Ebba obviously have two different versions of what occurred.

Both partners quickly come to seem shocked by the implications of this disagreement. After what Tomas calls “that godawful dinner,” they hug each other and agree that though the avalanche terrified the whole family, everyone is now fine. But the avalanche of their emotions is, like the one on the mountain, not nearly as controlled as they imagine it to be. The subject won’t go away.

Östlund has said the film was inspired by an incident in which a Swedish couple, friends of his, went on vacation to Latin America. They were having dinner when gunmen burst into the restaurant and began firing. Rather than protecting his wife, the husband dove for cover. The wife was stunned. “Back in Sweden,” the director said, “she could not stop, after a glass of wine or two, telling the story over and over again….” Östlund later did research on couples who survive disasters like shipwrecks, tsunamis and such, and found that a strikingly high percentage of them end up divorcing.

Taking the idea of a sudden upset of familial normality as his dramatic kernel, Östlund fashions an examination of marital upset that’s beautifully written, sometimes quite funny, and plotted with a kind of forensic exactitude. Unlike American movies, where our identification with one character or another would likely be imposed from the outset, “Force Majeure” stands back from its couple, allowing us to inspect the characters from a discreet distance and draw our own conclusions.

It is important, however, both dramatically and symbolically, that there are not two equal “truths” at work here. The wife alone is right about what happened at that fateful lunch (as a second viewing of the film will confirm). So the story is not about anything so fashionable as the relativity of truth. It’s about what happens when one partner blatantly fails in his duties to his family and then can’t admit or come to terms with that offense.

The film has a real feeling of cultural currency, which sometimes comes through in small details that can seem more resonant in thinking back on them. For instance, the two people the main couple share that “godawful dinner” with are a young American guy and an older Swedish woman who’s picked him up that morning. In introducing the guy, the woman says he’s told her he’s “very religious.” He replies that he said no such thing, only that he’s “not an atheist.”

Beyond another example of a man and a woman narrating the same incident differently, this moment reminds us that “Force Majeure” is a Swedish film belonging to the era after Ingmar Bergman’s “silence of God.” With no Deity to blame for that avalanche–an “act of God” to some–the humans in this tale are left to fend for themselves.

A prize-winner at Cannes this year, and easily one of the most impressive European dramas of late, “Force Majeur” is assured and finely calibrated on every level, with especially expert, nuanced performances by its leads. Östlund’s cool, distanced style–the camera often follows characters from behind with fluid motions, or gazes down from a height at the ski slopes or the hotel’s interiors–has been compared to that of Michael Haneke, though the adjective “Kubrickian” might also be applied: Though less horrific (or final) than that of “The Shining,” the alpine marital ordeal chronicled here is no less striking. 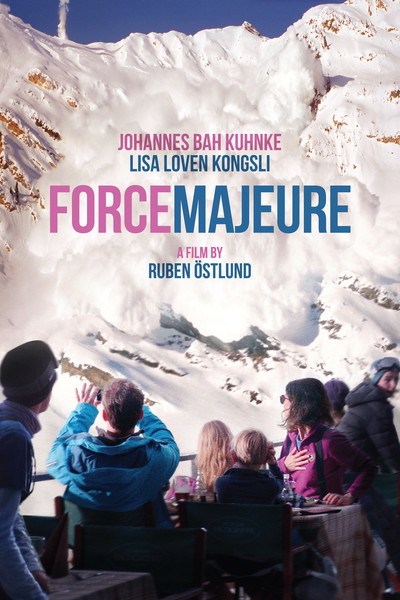 Rated R for some language and brief nudity