"Gone Girl" is art and entertainment, a thriller and an issue, and an eerily assured audience picture. It is also a film that shifts emphasis and perspective so many times that you may feel as though you're watching five short movies strung together, each morphing into the next.

At first, "Gone Girl" seems to tell the story of a man who might or might not have killed somebody, and is so closed off and alienating (like Bruno Richard Hauptmann, perhaps) that even people who believe in his innocence can't help wondering. His name is Nick Dunne (Ben Affleck). He's a college professor and a blocked writer. His dissatisfied wife Amy (Rosamund Pike) disappears one day, prompting local cops to open a missing persons case that becomes a murder investigation after three days pass without word from her. Amy and Nick seemed like a happy couple. The snippets from Amy's diary, read in voice-over by Amy and accompanied by flashbacks, hint at differences between them, but not the sort that seem irreconcilable (not at first, anyway). Were things ever really all that sunny, though? If they weren't, which spouse was the main source of rancor? Can we trust what Nick tells the homicide detectives (Kim Dickens and Patrick Fugit, both outstanding) who investigate Amy's case? Can we trust what Amy tells us, via her diary? Is one of the spouses lying? Are they both lying? If so, to what end?

The film raises these questions and others, and it answers nearly all of them, often in boldface, all-caps sentences that end with exclamation points. It is not a subtle film, nor is it trying to be. As directed by David Fincher ("Se7en," "Zodiac") and as adapted by Gillian Flynn from her bestselling potboiler, "Gone Girl" suggests one of those overheated, fairly comic-bookish "R"-rated thrillers that were everywhere in the late '80s and early '90s. Like those sorts of pictures, "Gone Girl" is dependent upon reversals of expectation and point-of-view. As soon as you get a handle on what it is, it becomes something else, then something else again. Describing its storyline in detail would ruin aspects that would be counted as selling points for anyone who hasn't read Flynn's book. That's why I'm being so vague.

Suffice to say that its explicit sex and violence and one-damn-thing-after-another, to-hell-with-realism plotting put it in the "Basic Instinct"/"Fatal Attraction"/"Presumed Innocent" wheelhouse. It is a metafictionally-minded version of a bloody domestic melodrama that actually uses the word "meta" (in a scene where Nick and the cops discuss his bar, which is named The Bar). It ties much of its mystery plot to an anniversary scavenger hunt with clues enclosed in numbered envelopes marked "clue." Key scenes revolve around public statements that are in some sense performances, and that are evaluated by onlookers in terms of their believability.

And yet it never crosses the line and becomes too much a deconstruction or parody. It's a plot-obsessed picture that's determined to stay one step ahead of the audience at all times, and cheats when it feels it has to. It is a perfect example of a sub-genre that the great critic Anne Billson has labeled "the preposterous thriller," in which "characters and their behavior bear no relation not just to life as we know it, but to any sort of properly structured fiction we may have hitherto encountered."

Many classic and near-classic films can be slotted into this sub-genre. One of them is Alfred Hitchcock's "Vertigo," a film in which the bad guy's scheme makes no sense if you think about it for longer than thirty seconds and that, in any event, would have unraveled had even the smallest part of it not gone precisely as envisioned. (How did Gavin and imposter-Maddie get out of the bell tower, anyway, without being seen by anybody, including Scottie? Was there a second stairwell?) After "Gone Girl" I overheard a couple listing all the dropped plot threads and narrative holes big enough to hide aircraft carriers in. This isn't the sort of movie that can withstand that kind of scrutiny. You might as well say, "That part in my dream where the penguin told me where to dig for the treasure seemed unrealistic."

What of "Gone Girl" as a parable of gender relations, one that eventually takes an ugly misogynist turn? I've heard these charges leveled, and they have merit. You'll understand what I mean once you've seen the movie. At the same time, though, as we evaluate those complaints, we owe it to Flynn, Fincher and everyone involved to take into account what sort of film this is, what mode it's operating in, and how transparent it is about what it's doing, how it's doing it, and why. "Gone Girl" is a nightmare of love gone cold and a relationship gone south, coupled with an elaborate revenge fantasy that both exploits and reclaims sexist images and assumptions. It's also a film about a psychopath who turns an ordinary life into chaos. Like a lot of Hitchcock—and like certain domestic nightmares by such filmmakers as Brian De Palma and Luis Bunuel—each scene in the movie refers, however obliquely, to real fears, real emotions and real configurations of love or friendship. But at the same time, not a single frame is meant to be taken literally, as a documentary-like account of how people are, or should be, or shouldn't be. It's working through primordial feelings in the manner of a blues song, a pulp thriller, a film noir, or a horror picture.

These modes all trade in stereotypical views of the essences of masculinity and femininity. All are politically incorrect by definition. All seem to have had at least some bearing on "Gone Girl." The movie is sick joke, a fable and a lament. It's "He done her wrong" and "She done him wrong." It's "Men are spineless pigs" and "Hell hath no fury like a woman scorned."  If you make blanket assumptions about what men and women are capable of, and the circumstances under with they're capable of it, this film will confirm them. "Your chin," Amy tells Nick in a flashback, "it's quite villainous." He covers it up with his finger, but now that she's pointed it out, you can't not stare at it.

The most intriguing thing about "Gone Girl" is how droll it is. For long stretches, Fincher's gliding widescreen camerawork, immaculate compositions and sickly, desaturated colors fuse with Trent Reznor and Atticus Ross's creepy-optimistic synthesized score to create a perverse big-screen version of one of those TV comedies built around a pathetically unobservant lump of a husband and his hypercontrolling, slightly shrewish wife. For most of its running time, "Gone Girl" is "Everybody Loves Accused Wife-Murderer Raymond," sprinkled with colorful-verging-on-wacky supporting players (including Tyler Perry as a Johnnie Cochran-like defense attorney and Neil Patrick Harris as a former flame of Amy's who's still obsessed with her). Then it takes a right turn, and a left turn, and flips upside down.

I'm not saying the film is genuinely clever throughout (though it is always fiendishly manipulative) or that every twist is defensible (a few are stupid). I'm saying that "Gone Girl" is what it is, that it knows what it is, and that it works. You know how well it's working when you hear how audiences laugh at it, and with it. Their laughter evolves as the film does. They laugh tentatively at first, then with an enthusiasm that gives way to a full-throated, "I endorse this madness!" gusto during the final half-hour, when the story spirals into DePalma-style expressionism and the picture becomes a maelstrom of blood, tears and other bodily fluids. There are allusions to the O.J. Simpson case, "Macbeth" and "Medea," and the ending is less an ending than a punchline that's all the more amusing for feeling so deflated.

That it's hard to tell whether Fincher has an opinion on anything he's showing us or is just sadistically bemused, like an evil child tormenting insects, somehow adds to the movie's dark vibrancy. This director is a misanthrope, no question. But misanthropes can be entertaining, and "Gone Girl" is that—not just in the scenes where women see through men and other women with furious contempt, but in throwaway moments, such as when an unseen man yells "Louder!" at the beleaguered Nick during a press conference, and when the film shows tourists gathered in front of Nick's bar, taking selfies. This is a sick film, and often brilliant. 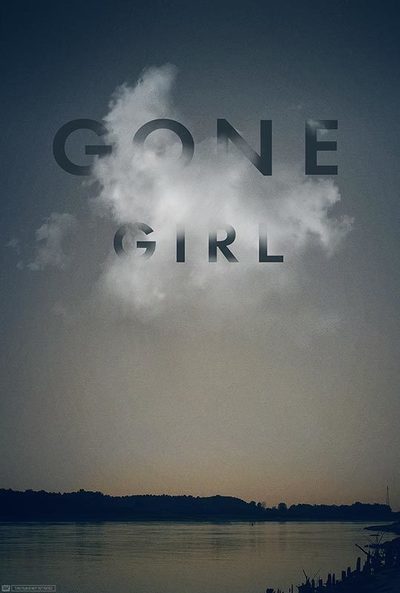 Rated R for a scene of bloody violence, some strong sexual content/nudity, and language