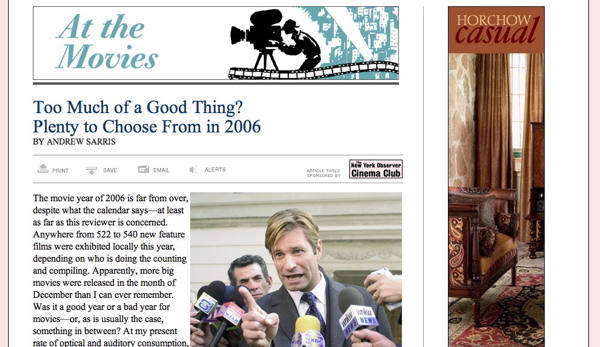 In his New York Observer year-end wrap-up (and ten-best list), Andrew Sarris attempts to steal the thunder of one of his New York "alternative weekly" rivals.

Fortunately, modern technology makes it almost impossible for a good movie to get “lost” because of end-of-the-year mental exhaustion. So, with the proviso that I still have a great deal of catching up to do, here are my considered choices for the various 10-best categories, and one of my patented 10-worst lists under the provocative heading of “Movies Other People Liked and I Didn’t.” I am not at all deterred in dishing out my annual supply of negativity by the correspondent who informed me last year that he preferred all the films on my 10-worst list to all the films on my 10-best list. I have long ago become resigned to my fate as a reviled revisionist ever since my first column in The Village Voice in 1960 hailed Alfred Hitchcock as a major artist for "Psycho," and inspired more hate mail than any Voice column had received up to that time. That clinched my job at the ever-contrarian Voice, and I have simply gone on from there.

So, how contrarian is the "reviled revisionist" 46 years later? Let's see:

"The Departed" as best film of the year. (Only in New York!)

And then there's this:

Next Article: Up With Contempt! Previous Article: Children of...?