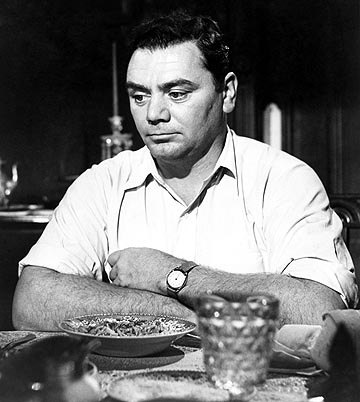 My own choices are below, after the jump...

1) Roberto Benigni, "Life is Beautiful" Not just because the movie itself is a despicable act of Holocaust denial. But that helps.

3) Al Pacino, "Scent of a Woman" We saw, we noticed, we gave him an Oscar -- for those other movies. Nobody even remembers this one. And (like "Gandhi") nobody watches it.

4) Laurence Olivier, "Hamlet" "The story... of a man... who could not... make up... his mind." Shallow interpretation of the play and the character. They say he was great onstage. This film is only one notch above his hilarious rabbi in Neil Diamond's "The Jazz Singer."

5) Dustin Hoffman, "Rain Man" Stunt acting at its showiest. It's great when he jumps the fountains in front of Caesar's Palace, though. Oh, wait. That was Evel Kneivel.