A Journey to the End of Taste 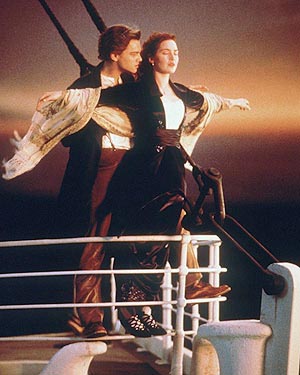 Their hearts will go on, even if they're all wet.

Who says there's no accounting for taste?¹ Maybe there is. New Yorker music critic and Alex Ross (whose brilliant book "The Rest is Noise" I wrote about last month) mentioned another book on his blog and now I've gotta get ahold of it (as Barak Obama maybe sorta allegedly did).²

It's called "Let's Talk About Love: A Journey to the End of Taste," by Toronto Globe and Mail pop music critic Carl Wilson, and it critiques a Celine Dion album. The one with the "Titanic" love theme on it. Well, kind of.

If you've been following posts and discussions around these parts recently ("Moviegoers Who Feel Too Much," "Are Movies Going to Pieces?," "Don't let this affect your opinion of Juno..."), you'll know why that title immediately grabbed my attention. And it's not because I'm a Celine Dion fan.

From a review by Sam Anderson in New York Magazine:

Wilson’s real obsession here is not Céline but the thorny philosophical problem on which her reputation has been impaled: the nature of taste itself. What motivates aesthetic judgment? Is our love or hatred of “My Heart Will Go On” the result of a universal, disinterested instinct for beauty-assessment, as Kant would argue? Or is it something less exalted? Wilson tends to side with the French sociologist Pierre Bourdieu, who argues that taste is never disinterested: It’s a form of social currency, or “cultural capital,” that we use to stockpile prestige. Hating Céline is therefore not just an aesthetic choice, but an ethical one, a way to elevate yourself above her fans—who, according to market research, tend to be disproportionately poor adult women living in flyover states and shopping at big-box stores. (As Wilson puts it, “It’s hard to imagine an audience that could confer less cool on a musician.”)

I don't know that I've ever heard a Celine Dion song besides the "Titanic" one (he said, attempting to stockpile some cultural capital) and I must admit: My first thought when I decided to check out the book was that I couldn't buy it, or even be seen leafing through it, at a local bookstore because I'd be appalled if anyone saw me. Even someone I didn't know. In the next moment I was even more ashamed that I'd felt that fear of shame. Taste'll do that.

... [W]hen Wilson talks about Let’s Talk About Love, he’s really talking about the way we relate to each other as human beings. Readers of the dizzyingly dweeby intellectualizing that often makes Wilson’s blog an exhausting pleasure to read will not be surprised that, for him, a discussion of the love theme from Titanic must encompass an examination of Quebecois culture, the history of parlour entertainment as it relates to the immigrant experience, the philosophies of Hume and Kant... [...]

Wilson’s reading of philosophy, social theory and his own conscience pretty conclusively demonstrates that the revulsion Dion inspires in the cultural elite is a function of class. We like what we like because of our social circle and education and cultural and economic prospects, and we dislike most intensely that which we perceive to be beneath our station.

Advertisement
In other words, what we call "taste" has a lot to do with shame, and is intertwined with issues of age, class, race, etc., that we tend to label conveniently as separate concerns. (See my piece on "Black humor: Stepin Fetchit to Richard Pryor to Tyler Perry.") 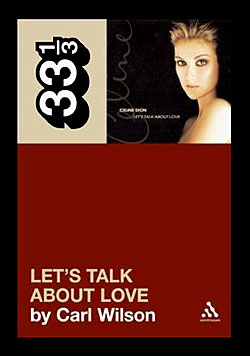 More from Douglas Wolk at The Savage Critic(s):

Wilson has plenty of points of disagreement with Bourdieu (and so do I), but he notes that "even if Bourdieu was only fifty percent right -- if taste is only half a sub-conscious mechanism by which we fight for power and status, mainly by condemning people we consider 'beneath' us -- that would be twice as complicit in class discrimination as most of us would like to think our aesthetics are."

According to Wilson himself (in an essay at Powells.com -- the web site for the legendary Portland used and new book store):

My own book might be the [33 1/3] series' dodgiest pretender, as it claims on its cover to be about a Celine Dion album, and then goes on for about 9 of its 12 chapters without saying more than a few words about that album, going on instead about taste and globalization and sentimentality and schmaltz and TV shows about teenage girls. My book is a lab experiment in disguise, in which I was the rat, being exposed to various test conditions or stimuli that might help me understand how millions of people could be fans of Celine Dion while I and nearly everybody I'd ever met couldn't stand her. [...]

It was a weird experience to spend months on end thinking about Celine Dion, but much of the time I wasn't thinking about Dion so much as about the chemical components, the relationships and accidents and outside forces, that go into liking or disliking music in the first place. The book was kind of a far-flung exercise in suspension of judgment, about putting off a thumbs-up or thumbs-down for awhile, and one of the advantages of doing that is that in the interim, you might end up somewhere else than where you bargained for. [...]

And isn't that what frequently happens with our cultural interests — that the most significant thing about them, often, is how they mutate into other interests? You start out getting interested in blues through the White Stripes, say, and then a year later you find that what's really sending you is early African-American fiddle records, and within months you're reading books on the history of the minstrel show, realizing uncomfortably that half the campfire songs you ever knew (the half that weren't written by Woody Guthrie) started out being sung by white men with black cork smeared across their faces.

Well, yes it is, and we can all trace our own similar meandering pathways through movies, music, art, science, history. It reminds me of... researching and writing and publishing a blog, where a (self-)examination of one preoccupation leads to another and another and another. What you end up doing is challenging yourself endlessly, pushing yourself to get to the root of how you think you understand something, to go where you find yourself feeling most reluctant to go, and to articulate what you find out -- which often amounts to more questions and challenges.
Advertisement

Wilson mentions "sentimental art and the 20th-century preoccupation with dividing culture into 'highbrow, lowbrow and middlebrow'" -- which brings us back to "taste." How do we develop it? Scientific studies indicate that many children don't like green vegetables because their body chemistry is different from adults and broccoli really tastes bad to them. But their palates develop with time, and they may grow to love the stuff. Might our "taste" in art and entertainment develop similarly? What about when we find ourselves diverging with our peers -- or respected authorities -- on movies or music? Maybe we like something they dismiss as "lowbrow" or "middlebrow" -- or we don't buy something "highbrow" they hold in esteem (hmmm, what examples come to mind?): How do we explain those opinions in term of "cultural capital"? Do we derive a sense of superiority from being contrarian or perverse? From crowing about something others find disreputable or even beneath consideration -- or proudly pointing out the Emperor's New Clothes when it seems everyone around us is blind?³

I can't help it, I'm going, once again, to invite comments by quoting from one of my favorite songs (by Ralph Freed and Burton Lane, 1941) -- memorably recorded by Frank Sinatra on "Songs for Swingin' Lovers":

[1] "The New Dictionary of Cultural Literacy" says it's from the latin proverb: De gustibus non est disputandum, so I guess that's who.

[2] According to author Wilson on his blog Zoilus:

This was too weird and funny not to share: I was informed this weekend by a dubiously reliable source, that my book was leafed through briefly on the campaign bus last week by Barack Obama, who made some joke to the effect that it sounded like I felt about Celine the same way he feels about Hillary. It was the Celine/Hillary connection that prompted him to pick it up in the first place, after a campaign volunteer (the guy who told me the story) left it lying around on the bus.