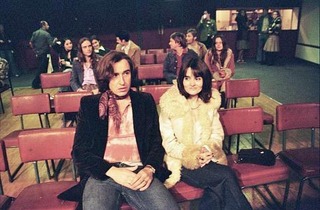 As I always like to say, "Everybody Loves Lieblingsfilme." I know I do, which is why I made this list of my 22 favorite films of the '00s. No, that is not entirely true. I made the list because the estimable Milan Pavlovic, editor of the German Filmzeitschrift Steadycam (and for whom I wrote this profile of Barbara Baxley's Lady Pearl in Robert Altman's "Nashville") asked me to.

He asked others, too, and the aggregate findings will be published in a future issue of Steadycam. The important thing to remember here is that these are favorite films. Sure, everything on my list is also an accomplished work of art, but these are the movies I love, that have had the most personal impact on me, that I have found most moving and exhilarating, that have permanently ingrained themselves into my psyche -- whether they're anybody else's idea of the "best of the decade" or not:

Now updated with links to my previous noodlings, where available:

And "Pineapple Express," too. And "Brick." And "A Prairie Home Companion." And "Munich"... Oh, jeez, I'm starting to re-think this whole endeavor...

ADDENDUM: I can think of only three good reasons for anybody to make these silly lists: 1) to recommend films the list-maker really loves and hopes to share; 2) to convey some information about the list-maker's cinematic values, taste, personality; 3) to provide links (or capsules) that offer further information about what the list-maker finds so valuable about these particular selections. As a reader, I use them to help me get recommendations for movies I really must see (or re-visit) and... well, to get some idea of what the person making the list cares about in movies, and these movies in particular. That's about it.

Next Article: The median-est of all movie lists of the decade Previous Article: Precious Based on the Movie Female Trouble by John Waters

The median-est of all movie lists of the decade

Precious Based on the Movie Female Trouble by John Waters