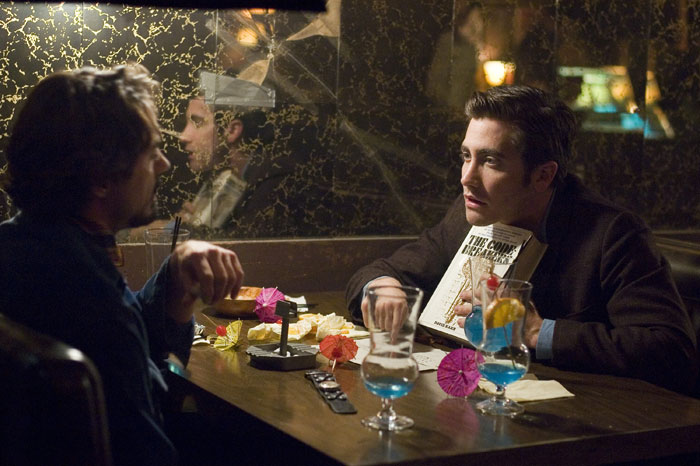 There's something about an Aqua Velva Man.

>> The blue Aqua Velva cocktail that Jake Gyllenhaal's character orders is named after a popular after-shave lotion of a similar color. The drink consists of vodka, gin, blue curaçao and Sprite or 7-Up. (Today you might even be able to get away with Sierra Mist.) Some variations also include rum and tequila. And, perhaps, a sprig of mint or an orange slice. Other recipes call for Baileys Irish Cream (for that foggy look, I guess). And still one other is made of tequila, blue curaçao, and fruit juices. It's not necessarily as frou-frou as it seems in the movie (with those fancy glasses, umbrellas, maraschino cherries and all): In WWII, US sailors were said to drink it for its alcohol content (which has since been reduced). A little soapy, perhaps (ingredients: Alcohol 40, water, glycerin, fragrance, menthol), but it went down smooth, evidently...

Shake vodka, gin, blue curaçao and Sprite with ice. Pour/strain into glass and top off with Sprite. Cocktail umbrella and fruit/mint garnish optional.

>> Avery covered the Zodiac case for the SF Chronicle (which reprints one of the stories featured in the movie here), and Chronicle cartoonist Robert Graysmith (played by Gyllenhaal) wrote the book, "Zodiac," on which the movie was based. But Avery later co-wrote a book about another famous Bay Area case he covered, the Patricia Hearst kidnapping. Avery and Vin McLellan published "The Voices of Guns: The Definitive and Dramatic Story of the Twenty-two-month Career of the Symbionese Liberation Army, One of the Most Bizarre Chapters in the History of the American Left" (Putnam, 1977).

>> Recording sessions for the haunting Donovan song "The Hurdy Gurdy Man" (and the album of the same name), used to spine-tingling effect in the movie, included John Paul Jones and Jimmy Page and/or John Bonham, who would go on to form Led Zeppelin. Donovan claimed George Harrison wrote part of a lyric for "Hurdy Gurdy Man" when they were in Rishikesh, India, with Maharishi Mahesh Yogi -- along with the other Beatles, Jane Asher, Mia Farrow, Beach Boy Mike Love and others. (Another Donovan song, "Wear Your Love Like Heaven" from 1967, was featured in TV commercials for Love's Baby Soft cosmetics, targeted at teen and pre-teen girls, in 1968.)

>> According to Donovan's autobiography, "The Hurdy Gurdy Man," the verse George Harrison wrote was cut from the "Hurdy Gurdy Man" single (to keep it short for DJs), but was used by Donovan on a 1990 live album. The verse (which would have worked perfectly in the movie):

>> Construction on San Francisco's famous pyramidal Transamerica building began in 1969 and was finished in 1972. It is still the city's tallest skyscraper.

>> Although crude fax technology existed in the late 19th century, and a modified form was used by the Associated Press to transmit what were identified as "AP Wirephotos" beginning in 1934, the modern fax machine did not come into general use until the mid-1970s. By the mid-1980s, falling electronics prices and improved phone technology made the fax a ubiquitous office tool.

>> The opening song in "Zodiac" is "Easy to be Hard" (from "The American Tribal Love/Rock Musical," "Hair") performed by Three Dog Night -- one of the best-selling bands of the late 1960s and early 1970s, whose hit singles included "One" (written by Harry Nilsson; recorded by Aimee Mann for the soundtrack of Paul Thomas Anderson's "Magnolia"), "Mama Told Me Not to Come" (written by Randy Newman; also used in PTA's "Boogie Nights"), "Eli's Coming" (written by Laura Nyro) and "Joy to the World" (written by Hoyt Axton -- the guy who buys the gremlin in Joe Dante's "Gremlins"). The Three Dog Night version of "Shambala" (1973) was featured in a recent episode of the TV show "Lost," in which an eight-track cassette of the song is found in a crashed VW bus. TDN's version of "Shambala" was also used on the soundtrack of Rob Zombie's "The Devil's Rejects."