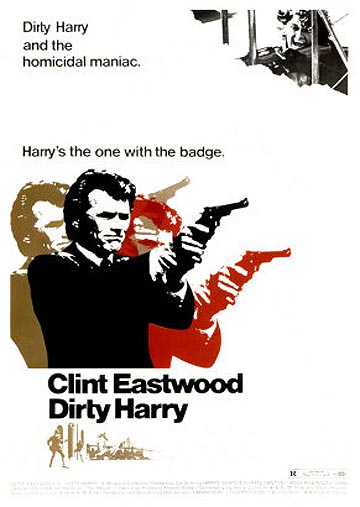 "Dirty Harry" (1971). This poster design wasn't actually used for the original release, though Critic Gary Giddins noted that this was the "DH" poster on display in Eastwood's Malpaso office in 1988. Typeface: Is that a Helvetica font?

In celebration of the DVD release of David Fincher's Director's Cut of "Zodiac" (only a few minutes longer -- I'm not sure what has been changed or added see below), here's a scripted scene, from an undated draft, that you won't find in any version of the movie:

Graysmith and Toschi sit in the dark while "Dirty Harry" unspools on the screen in front of them.

MOVIE POLICE CAPTAIN (O.S.) He calls himself the Scorpio Killer. From what we understand, he's planning on targeting a school bus full of children.

THE AUDIENCE around Graysmith and Toschi burst into APPLAUSE.

ON SCREEN -- The final scene. Clint has cornered the SCORPIO KILLER. Holding his Magnum .44 on him.

CLINT EASTWOOD (CONT'D) ... maybe I fired five bullets, maybe I fired six. In all the confusion, I lost count. So the only question is, do you feel lucky? Do you? Punk?

A beat. Apparently the Scorpio Killer feels lucky and goes for his gun. Clint blows his head off.

And then BURST OUT HYSTERICALLY LAUGHING. At the absurdity of it all. They get some looks, but that only makes them laugh harder. They can't stop. Doubled over. Tears run down their faces. A release of all the built up tension...

Advertisement
What a beautiful, ambiguous scene. I wonder if they could have made it work on film without having to spell it out.

In "Zodiac" itself, Toschi (Mark Ruffalo) goes into the lobby for a smoke, and Graysmith (Jake Gyllenhaal) approaches him for the first time. He shyly introduces himself and, awkwardly, tells Toschi how the movie ended. Toschi makes a defensive remark along the lines of, "So much for due process..." The movie (like "No Country for Old Men") never allows its characters or its audience even a vicarious catharsis. It's all about not knowing -- and having to live with the knowledge of not knowing...

UPDATE: 1 Day Later: January 9, 2008: Please see Zac's comment below for exact notations on the differences between the theatrical and director's cuts of "Zodiac." (I cannot imagine a more fitting response to the movie than this kind of detective work!)

Also: In Fincher's commentary on his movie's "Dirty Harry" scene, he says that Toschi (on whom Steve McQueen modeled his performance in 1968's "Bullitt") was "amused" at the Hollywood take on Zodiac, and that people began to say things to him like, "Guess Dirty Harry solved your case!" Fincher suggests maybe the Eastwood movie provided a kind of artificial closure for the public that they would never get in life, and that perhaps they began to lose interest in Zodiac afterwards because of it. (Four "Dirty Harry" sequels were released between 1973 ("Magnum Force"] and 1988 ["The Dead Pool"].) Fincher recalls that, as he and his family were moving away from the Marin area in 1976 (when he was about 13 or 14), he wondered if they'd ever caught the Zodiac.

As Mr. Peel observes below, Eastwood's voice and likeness are conspicuously absent from "Zodiac." Even a shot of the standee in the lobby is chopped at the neck.

B.J. Novak's The Premise is an Inspired Satire of Modern Issues

Strength Behind the Joy: Max Harwood, Lauren Patel and Jonathan Butterell on Everybody’s Talking About Jamie