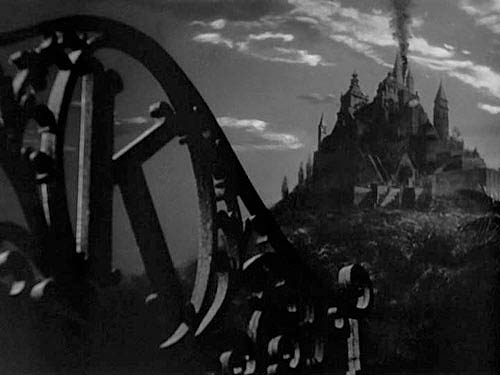 Here's Roger Ebert's take. Some oversights have been corrected since the first list was compiled (by polling film "critics, historians and experts" -- categories that are mutually exclusive?) in 1998. To me, that's "the day before yesterday."

Anyway, the good news is that "Nashville" went from 0 (i.e., not on the list) to 59. At this rate, it will easily reach its rightful place in the top ten by 2017. Buster Keaton (previously unrepresented) scored with "The General" at number 18, which means it will surpass "Citizen Kane" by next Tuesday. And "Sunrise" finally made it aboard at 82. Other new additions include: "Lord of the Rings: The Fellowship of the Ring," "Saving Private Ryan," "Titanic," and "The Sixth Sense" (all newly eligible) and "Cabaret," "Who's Afraid of Virginia Woolf?," "The Shawshank Redemption," "All the President's Men" (1976), "Spartacus," and "A Night at the Opera."

More good news: "The Searchers" leapt from 96 to 12. Maybe people are starting to understand it after 51 years.

Welcome, too, to these new arrivals in the Class of '07: "Intolerance" (much more engaging than "The Birth of a Nation"), "Sullivan's Travels" (though I'd prefer "The Lady Eve" or "Miracle of Morgan's Creek"), "Cabaret," "Who's Afraid of Virginia Woolf?," "All the President's Men," "A Night at the Opera," "Swing Time," "The Last Picture Show," "Do the Right Thing" and "Blade Runner" (maybe the next version Ridley Scott has planned will finally make it the masterpiece we've always wanted it to be).

And where did "Fargo" go?

Not much missed: "Mutiny on the Bounty," "Patton," "Guess Who's Coming to Dinner," "Fantasia," "Doctor Zhivago," "My Fair Lady," "An American in Paris."

Still unaccountably on the list: "The Sound of Music," "Tootsie," "Ben-Hur"... (And, really, "Star Wars" is lots of kiddie fun -- but one of the best American movies? Hardly. Alhough I could say that about "The Wizard of Oz," too. Both "Oz" and "Star Wars" are movies people love because they loved them as kids -- and that's wonderful. Technically, they're also quite delightful. But as artistic achievements they're pretty thin. This isn't a popularity contest. Oh, actually it is. Still, I'll take "Pinocchio" or "Babe: Pig in the City.") And, one day, "Schindler's List" will be put into perspective, ranking slightly above "1941" (and below "Always" and "Amistad") in Steven Spielberg's body of work. For that matter, "Raging Bull" belongs above "The Departed" but below "After Hours" and way below "New York, New York" in Martin Scorsese's oeuvre.

Reuters notes that D.W. Griffith's "The Birth of a Nation" "fell off the list entirely because of its now unpopular ideology, despite its history of technical innovations." Well, maybe. But has anybody watched it recently? Anybody even felt like it? And did "The Jazz Singer" drop off for the same reason?

What great injustices (and justices) do you see? Take a look at the list and let me know what you think.