Every once in a while I have what I think of as an out-of-the-body experience at a movie. When the ESP people use a phrase like that, they're referring to the sensation of the mind actually leaving the body and spiriting itself off to China or Peoria or a galaxy far, far away. When I use the phrase, I simply mean that my imagination has forgotten it is actually present in a movie theater and thinks it's up there on the screen. In a curious sense, the events in the movie seem real, and I seem to be a part of them.

"Star Wars" works like that. My list of other out-of-the-body films is a short and odd one, ranging from the artistry of "Bonnie and Clyde" or "Cries and Whispers" to the slick commercialism of "Jaws" and the brutal strength of "Taxi Driver." On whatever level (sometimes I'm not at all sure) they engage me so immediately and powerfully that I lose my detachment, my analytical reserve. The movie's happening, and it's happening to me.

What makes the "Star Wars" experience unique, though, is that it happens on such an innocent and often funny level. It's usually violence that draws me so deeply into a movie -- violence ranging from the psychological torment of a Bergman character to the mindless crunch of a shark's jaws. Maybe movies that scare us find the most direct route to our imaginations. But there's hardly any violence at all in "Star Wars" (and even then it's presented as essentially bloodless swashbuckling). Instead, there's entertainment so direct and simple that all of the complications of the modern movie seem to vaporize.

"Star Wars" is a fairy tale, a fantasy, a legend, finding its roots in some of our most popular fictions. The golden robot, lion-faced space pilot, and insecure little computer on wheels must have been suggested by the Tin Man, the Cowardly Lion, and the Scarecrow in "The Wizard of Oz." The journey from one end of the galaxy to another is out of countless thousands of space operas. The hardware is from "Flash Gordon" out of "2001: A Space Odyssey," the chivalry is from Robin Hood, the heroes are from Westerns and the villains are a cross between Nazis and sorcerers. "Star Wars" taps the pulp fantasies buried in our memories, and because it's done so brilliantly, it reactivates old thrills, fears, and exhilarations we thought we'd abandoned when we read our last copy of Amazing Stories.

The movie works so well for several reasons, and they don't all have to do with the spectacular special effects. The effects are good, yes, but great effects have been used in such movies as "Silent Running" and "Logan's Run" without setting all-time box-office records. No, I think the key to "Star Wars" is more basic than that.

The movie relies on the strength of pure narrative, in the most basic storytelling form known to man, the Journey. All of the best tales we remember from our childhoods had to do with heroes setting out to travel down roads filled with danger, and hoping to find treasure or heroism at the journey's end. In "Star Wars," George Lucas takes this simple and powerful framework into outer space, and that is an inspired thing to do, because we no longer have maps on Earth that warn, "Here there be dragons." We can't fall off the edge of the map, as Columbus could, and we can't hope to find new continents of prehistoric monsters or lost tribes ruled by immortal goddesses. Not on Earth, anyway, but anything is possible in space, and Lucas goes right ahead and shows us very nearly everything. We get involved quickly, because the characters in "Star Wars" are so strongly and simply drawn and have so many small foibles and large, futile hopes for us to identify with. And then Lucas does an interesting thing. As he sends his heroes off to cross the universe and do battle with the Forces of Darth Vader, the evil Empire, and the awesome Death Star, he gives us lots of special effects, yes -- ships passing into hyperspace, alien planets, an infinity of stars -- but we also get a wealth of strange living creatures, and Lucas correctly guesses that they'll be more interesting for us than all the intergalactic hardware.

The most fascinating single scene, for me, was the one set in the bizarre saloon on the planet Tatooine. As that incredible collection of extraterrestrial alcoholics and bug-eyed martini drinkers lined up at the bar, and as Lucas so slyly let them exhibit characteristics that were universally human, I found myself feeling a combination of admiration and delight. "Star Wars" had placed me in the presence of really magical movie invention: Here, all mixed together, were whimsy and fantasy, simple wonderment and quietly sophisticated storytelling.

When Stanley Kubrick was making "2001" in the late 1960s, he threw everything he had into the special effects depicting outer space, but he finally decided not to show any aliens at all -- because they were impossible to visualize, he thought. But they weren't at all, as "Star Wars" demonstrates, and the movie's delight in the possibilities of alien life forms is at least as much fun as its conflicts between the space cruisers of the Empire and the Rebels.

And perhaps that helps to explain the movie's one weakness, which is that the final assault on the Death Star is allowed to go on too long. Maybe, having invested so much money and sweat in his special effects, Lucas couldn't bear to see them trimmed. But the magic of "Star Wars" is only dramatized by the special effects; the movie's heart is in its endearingly human (and non-human) people.

(See Ebert's review of "The Hidden Fortress," which inspired Lucas.) 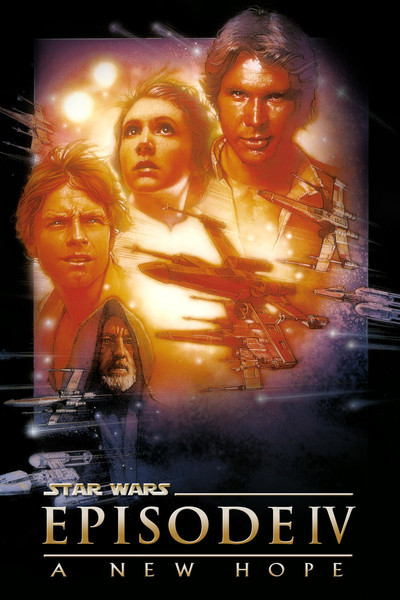