An American in Paris

"An American in Paris" swept the Academy Awards for 1951, with Oscars for best picture and the major technical categories: screenplay, score, cinematography, art direction, set design, and even a special Oscar for the choreography of its 18-minute closing ballet extravaganza.

"Singin' in the Rain," released in 1952 and continuing the remarkable golden age of MGM musicals, didn't do nearly as well on its initial release. But by the 1960s, "Singin' " was routinely considered the greatest of all Hollywood musicals, and "An American in Paris" was remembered with more respect than enthusiasm.

Now that the film has been restored for a national theatrical release and an eventual re-launch on tapes and laserdiscs, it's easy to see why "Singin' " passed it in the popularity sweepstakes. Its story of two Americans in Montparnasse - a struggling painter (Gene Kelly) and a perennial piano student (Oscar Levant) - is essentially a clothesline on which to hang recycled Gershwin songs ("I Got Rhythm," "S'Wonderful") and a corny story of love won, lost, and won again. Compared to "Singin's" tart satire of Hollywood at the birth of the talkies, it's pretty tame stuff.

And yet "American" has many qualities of its own, not least its famous ballet production number, with Kelly and Leslie Caron symbolizing the entire story of their courtship in dance. And there are other production numbers, set in everyday Parisian settings, that are endlessly inventive in their use of props and locations.

The stories of the two movies are curiously similar. In both of them, Kelly must break his romance of convenience with a predatory older blonde (Nina Foch in "American," Jean Hagen in "Singin' ") in order to follow his heart to a younger, more innocent brunette (Leslie Caron and Debbie Reynolds). In both, he is counseled by a best friend (Oscar Levant and Donald O'Connor). And in both there is a dramatic moment when all seems lost, just when it is about to be gained.

"Singin' " is the more realistic picture, which is perhaps why it holds up better today. "American" has scenes that are inexplicable, including the one where Levant joins Kelly and their French friend Henri (Georges Guetary) at a cafe. When he realizes they are both in love with the same women, Levant starts lighting a handful of cigarettes while simultaneously trying to drink coffee.

Maybe it seemed funny at the time.

There's also a contrast between the Nina Foch character - a possessive rich woman who hopes to buy Kelly's affections - and Jean Hagen's brassy blonde, a silent star whose shrieking voice is not suited to the sound era. Foch's blonde is just plain sour and unpleasant. Hagen's blonde is funny and fun. And, for that matter, there's no comparing the ingenues, either: Caron, still unformed, a great dancer but a so-so actress, and Reynolds, already a pro in her film debut, perky and bright-eyed.

The version now being released is a "true" restoration, according to the experts at Turner Entertainment, who say the job they did on "American" compares to the salvage work on "Gone With the Wind" and "Lawrence of Arabia." Because two reels of the original negative were destroyed by fire, painstaking lab work was necessary to match those reels to the rest of the film. The result is a bright and fresh-looking print, in which the colors are (probably deliberately) not as saturated or bold as in the classic Technicolor process.

The ads say the movie is now in stereo. This is not quite true. Only the 18-minute ballet has been reprocessed into a sort of reconstructed stereo, and if a theater plays the whole film in stereo the result may be the kind of raw-edged sound I heard at a press screening, before the projectionist gave up and switched to mono. The best choice would probably be to start in mono and physically switch to stereo when the ballet starts - although why so much labor is expended on quasi-stereo effects is beyond me. The real reasons to see "An American in Paris" are for the Kelly dance sequences, the closing ballet, the Gershwin songs, the bright locations, and a few moments of the ineffable, always curiously sad charm of Oscar Levant. 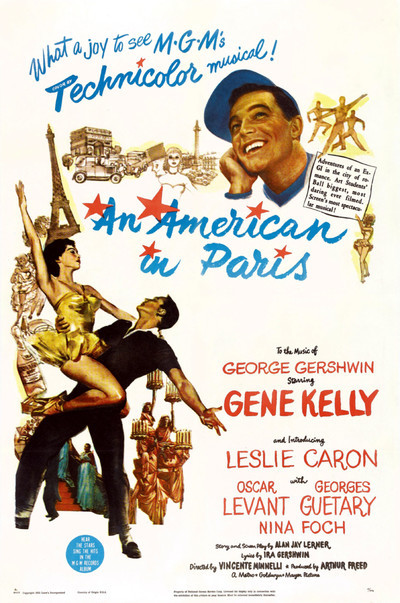