Of all of the places the movies have created, one of the most magical and enduring is the universe of Fred Astaire and Ginger Rogers. To a series of movies made between 1933 and 1939, they brought such grace and humor that they became the touchstone of all things elegant. “Whenever any kind of question of style or taste comes up,” the director Gregory Nava once told me, “I simply ask myself--what would Fred Astaire have done?”

Astaire and Rogers were, first of all, great dancers. So were a lot of other film performers, including Astaire's partners (Rita Hayworth, Eleanor Powell, Cyd Charisse) after Rogers turned to serious dramatic roles. But what Fred and Ginger had together, and what no other team has ever had in the same way, was a joy of performance. They were so good, and they knew they were so good, that they danced in celebration of their gifts.

Look at the final moment of their number “Isn't It a Lovely Day?” in “Top Hat” (1935). It begins with her mocking him, following him around a bandstand with her hands in her pockets. It escalates into a passionately physical dance in counterpoint to thunder and lightning, and then slows down into a sequence where they imitate each other's styles and moves. Finally, satisfied, they plop down on the edge of the bandstand and shake hands.

I have always thought that handshake was between the dancers, not their characters. More than any other dancers in the history of film, Astaire and Rogers occupied real time. Godard told us in the 1960s that “the cinema is truth 24 times a second, and every cut is a lie.” Astaire arrived at the same conclusion 35 years earlier. He believed every dance number should be filmed, as nearly as possible, in one unbroken take, always showing the full figures of the dancers from head to toes.

There are no cutaways to an admiring audience--Astaire thought that was a distraction. No cuts, or very few, to different points of view (in “Swing Time,” the camera is on a crane to follow them up flights of stairs from a lower dance floor to a higher one). And no closeups of the dancer's faces, for that would deny us the movement of their bodies. (After seeing the dance film “Stayin' Alive” in 1983, Rogers sniffed to me: “The young people today--they think they can dance with their faces!”)

When you see anyone--an athlete, a musician, a dancer, a craftsman--doing something difficult and making it look easy and a joy, you feel enhanced. It is a victory for the human side, over the enemies of clumsiness, timidity and exhaustion. The cynical line on Astaire and Rogers was, “She gave him sex; he gave her class.” Actually, they both had class, and sex was never the point. The chemistry between Fred and Ginger was not simply erotic, but intellectual and physical: They were two thoroughbreds who could dance better than anyone else, and knew it. Astaire's later dance partners danced in his spotlight, but Ginger Rogers, the dance critic Arlene Croce wrote, “shed her own light.”

Astaire was a painstaking craftsman who, usually working with the choreographer Hermes Pan, preplanned even the slightest gesture in his dances. Rogers was a performer, not a creator, but she was willing to rehearse until her feet bled--and did. (“I did everything Fred did--backwards, and in heels.”) There is the fiction in their films that the dance numbers between them just happen, as a spontaneous expression of their feelings. They look carefree, but they're tightly disciplined in timing and movement, and required unimaginable hours of rehearsal.

Many of the Astaire-Rogers musicals involve Fred falling in love with Ginger at first sight, after which she backs cautiously away, only to be wooed in a series of dance numbers. When she has finally fallen in love, incredible plot contrivances make her think he's an adulterer, a philanderer, or engaged to somebody else. In film after film, she shies away from the undeniable love between them, only to be finally saved at the last moment during a dance scene of great romance and passion. “Only a very good girl could be quite so shrewd about life and so dumb about any man who threatens to race her blood,” Murray Kempton wrote when she died in 1995.

The best of the Astaire-Rogers films is their fifth, “Swing Time” (1936), directed by George Stevens at a time when he was a king at RKO Radio Pictures (his other credits in that period included “Alice Adams” and “Gunga Din”). The plot, with its sly drolleries, is based like “Top Hat” on mistaken identities, but it's wittier and more cleverly written; it could have been devised by P.G. Wodehouse. It serves to link the great dance sequences, built around Jerome Kern songs, including the climactic “Never Gonna Dance” number that may be the high point of the Astaire-Rogers partnership.

This song, which comes at the end and emotionally resolves all of their problems, has always struck me as mirroring the act of lovemaking. It opens with Astaire, dejected by rejection, walking slowly across the floor of a deserted nightclub. Rogers follows him, just as depressed. Almost imperceptibly, their walk gathers a quiet rhythm, until they are dancing without ever quite seeming to have started. They dance apart, together, apart. Astaire uses his trademark of changing tempo: Unrestrained passion changes suddenly to prolonged, drawn-out steps suggesting slow motion. Then the tempo revives again.

Another brilliant sequence is Astaire's solo, the “Bojangles of Harlem” number. Enlightened sensibilities are jarred by the sight of Astaire in blackface, but the Cinebooks essay calls this “perhaps the only blackface number on film which doesn't make one squirm today. His skin made up as an African American rather than a minstrel-show caricature of one, Astaire dances an obvious tribute to the great Bill Robinson.”

The number includes a famous sequence in which Astaire dances in front of three back-projected shadows of himself. The four figures are all in perfect sync for most of the way, until the joke is revealed when one of the shadows breaks out of sync, and eventually all three exit--unable to keep up with him. How did he do this? The three background silhouettes have identical movements, and Astaire mirrors them so well they seem to be his shadows, but apparently he simply timed his live performance so well it mirrored the back projection. Such technical discipline is awesome.

There's also the great number “Waltz in Swing Time,” in an astounding art deco nightclub, as a duet about new love: Their movements don't suggest physical passion, but that early stage of idealism in which lovers discover they're soulmates. And the movie's first dance number, “Pick Yourself Up,” is funny for the way Astaire pretends to be unable to dance, gets lessons from a dance instructor (Rogers), gets her fired, and then dances a furiously energetic tap number with her to prove to the boss that she did teach him something.

Fred Astaire (1899-1987) had such a particular physical presence that he was easy for cartoonists to caricature--he'd already done their work for them, with his hair slicked back flat from a high forehead above his long, triangular face. He wore clothes as if he had been born in them. His legs flopped over the arms of chairs, as if sitting up straight was unnatural for him. His romantic rivals, on the other hand, wore evening dress as if they had hair shirts underneath.

Ginger Rogers (1911-1995), almost as tall as Astaire, slender, athletic, with a face more cheerful than classically beautiful, was Astaire's ideal partner even when they weren't dancing. That's because they both knew, long before many of their contemporaries, that less is more. Big broad facial reactions and strong emotions would have destroyed these fragile films. Rogers survived her ludicrous plots by never quite seeming to believe them. She was sad, but not too sad; angry, but as an act, not an emotion.

When the genuine poignancy of their endangered romances had to be expressed, it was always through dance, not dialogue. That's why the “Never Gonna Dance” number is so wonderful: In their voices and movements, they make it clear that if they can't dance, they can't live. Well, maybe they can, but what fun would that be? 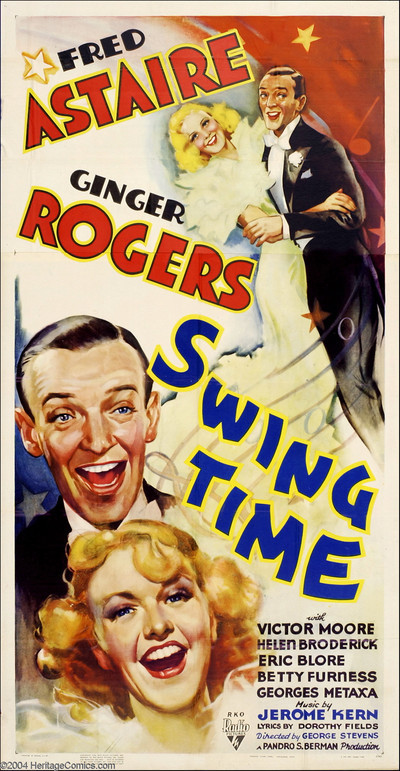