If I were asked to name the single scene in all of romantic comedy that was sexiest and funniest at the same time, I would advise beginning at six seconds past the 20-minute mark in Preston Sturges' "The Lady Eve,” and watching as Barbara Stanwyck toys with Henry Fonda's hair in an unbroken shot that lasts three minutes and 51 seconds.

Stanwyck plays an adventuress who has lured a rich but unworldly young bachelor to her cabin on an ocean liner, and is skillfully tantalizing him. She reclines on a chaise. He has landed on the floor next to her. "Hold me tight!” she says, holding him tight -- allegedly because she has been frightened by a snake. Now begins the unbroken shot. Her right arm cradles his head, and as she talks she toys with his earlobe and runs her fingers through his hair. She teases, kids and flirts with him, and he remains almost paralyzed with shyness and self-consciousness. And at some point during this process, she falls for him.

That isn't part of her plan. Stanwyck plays Jean Harrington, a con woman who travels first class with her father and their valet, fleecing rich travelers in card games and whatever else comes along. She sets her sights on Charles Pike (Fonda), heir to a brewery fortune, as he comes aboard after a snake-hunting expedition in South America. She drops an apple on his pith helmet as he climbs the rope ladder to the ship, and is reprimanded by her father: "Don't be vulgar, Jean. Let us be crooked, but never common.”

What is delightful about Stanwyck's performance is how she has it both ways. She is a crook, and yet can be trusted. A seductress, and yet a pushover for romance. A gold digger, and yet she wants nothing from him. And he is a naive innocent who knows only that her perfume smells mighty good to someone who has been "up the Amazon” for a year. She falls for him so quickly and so thoroughly that she's even frank about her methods; just before he kisses her in the moonlight in the ship's bow, she tells him, "They say a moonlit deck's a woman's business office.”

Howard Hawks once said that the flaw in his "Bringing Up Baby,” one of the great screwball comedies, is that everyone in it is a screwball; there's no baseline of sanity to measure the characters against. "The Lady Eve” (1941), which in its way is just as preposterous as the Hawks picture, doesn't make that mistake. Fonda is the rock. He remains vulnerable and sincere throughout the picture because, like all young men who are truly and badly in love, his consciousness is focused on one thing: the void in his heart that only she can fill.

That frees Stanwyck for one of her greatest performances, a flight of romance and comedy so graceful and effortless that she is somehow able to play different notes at the same time. The movie establishes Jean Harrington in an inspired early scene, as she joins her father, a phony colonel, in the ship's lounge. Using the mirror in her compact, she spies on Charlie Pike as he sits alone and reads a book (its title, "Are Snakes Necessary?,” is a sly addition to the movie's phallic imagery). Sturges cuts to the view reflected in the mirror, and Jean provides a tart voice-over narration for her father, describing the attempts of every woman in the room to catch the handsome bachelor's eye. Then, as Charlie leaves the room, she simply sticks out a foot and trips him; as he picks himself up she blames him for breaking off the heel of her shoe.

He escorts her to her stateroom and she tells him to pick out a new pair of shoes and put them on her feet. "You'll have to kneel down,” she says, and swings her nyloned leg almost in his face. His vision blurs with passion, and Sturges comes within an inch of violating the production code, the way her toe swings dangerously close. Poor Charlie falls for her, soon finds himself playing poker with Jean and her father, wins $600 as part of their setup, and then undergoes the exquisite torment of her ear-and-hair caress.

The plot unfolds as screwball invention, except that after boy meets girl and boy loses girl, boy wins what he only thinks is another girl. Jean, hurt by the way he has not trusted her, gets herself invited to a dinner at his father's palatial mansion by posing as "Lady Eve Sidwich.” Charlie is struck by how much Eve resembles Jean. "It's the same dame!” says his faithful valet Muggsy (William Demarest). But Charlie can't believe it, and follows her moon-eyed through a series of pratfalls.

Sturges says in his memoirs that the studios were always trying to get him to limit his pratfalls, and at the sneak previews he crossed his fingers as Demarest fell into the bushes and Fonda tripped over a couch and a curtain before getting a roast beef in his lap. But they all worked. "That couch has been there 15 years and nobody ever fell over it before!” exclaims Charlie's father. Lady Eve: "Oh, well -- now the ice is broken!”

Barbara Stanwyck (1907-90) was known primarily as a gifted dramatic actress ("Golden Boy,” "Stella Dallas,” "Double Indemnity”). Preston Sturges (1898-1959), who in the early 1940s made one inspired comedy after another ("Sullivan's Travels,” "Palm Beach Story”) and scarcely seemed able to step wrong, had promised her a comic role, and gave her one for the ages.

Although the movie would be inconceivable without Fonda, "The Lady Eve” is all Stanwyck's; the love, the hurt and the anger of her character provide the motivation for nearly every scene, and what is surprising is how much genuine feeling she finds in the comedy. Watch her eyes as she regards Fonda, in all of their quiet scenes together, and you will see a woman who is amused by a man's boyish shyness and yet aroused by his physical presence. At first she loves the game of seduction, and you can sense her enjoyment of her own powers. Then she is somehow caught up in her own seduction. There has rarely been a woman in a movie who more convincingly desired a man.

Her father is played by Charles Coburn (1877-1961), a valuable character actor from the 1930s through the 1950s, who in appearance was sort of a toned-down Charles Laughton. Here Coburn and Sturges make a crucial right decision: "Colonel” Harrington is not blustering and broad, but a smart and perceptive man, not loud, who loves his daughter.

Their relationship is established in a quiet scene the morning after Jean first meets Charlie. She is in her stateroom, still in bed. Her father enters in dressing gown, sits on her bed, and plays with a deck of cards while questioning her. At this point we have a good notion, but no hard evidence, that he is a fraud. "What are you doing?” she asks. "Dealing fives,” he says. She wants to see. He shows her four aces, puts them on top of the deck, and then deals four hands without dealing a single ace -- dealing the fifth card every time. (It's hard to be sure, but here and elsewhere it looks as if Coburn himself is handling the cards.)

The scene establishes him as a shark, makes it clear they're confederates, and underlines, by the way she calls him "Harry,” that they're two adults and not locked into a narrow daddy-daughter relationship. The scene also sets up the hilarious scene that night, where the Colonel tries to cheat Charlie at cards, and Jean outcheats him to rescue the man she loves.

A movie like "The Lady Eve” is so hard to make that you can't make it at all unless you find a way to make it seem effortless. Preston Sturges does a kind of breathless balancing act here, involving romance, deception and physical comedy. Consider the scenes where Jean masquerades as the Lady Eve. She throws Charlie off the scent by her very lack of a disguise: Brazenly entering his house looking exactly like herself, she adds a British accent and dares him to call her bluff. She knows he cannot, and the masquerade sets up the two final lines of the film, which I will not mention here -- except to say that for my money, either one is equal to the classic line "nobody's perfect!” at the end of "Some Like It Hot.” 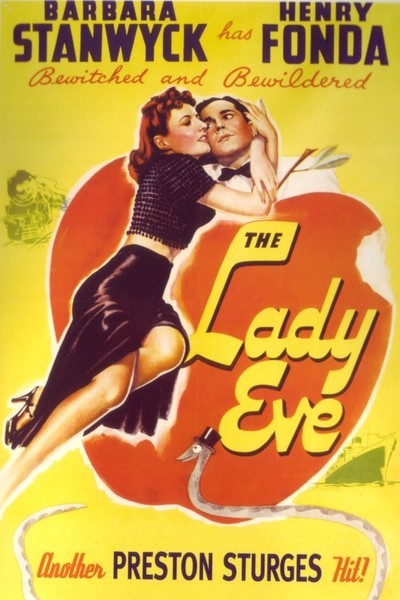