Deep in the heart of Texas

The best scene in "The Last Picture Show" takes place outside town at the "tank," an unlovely pond that briefly breaks the monotony of the flat Texas prairie. Sam the Lion has taken Sonny and the retarded boy Billy fishing there, even though, as Sonny observes, there ain't nothing in the tank but turtles. That's all right with Sam: He doesn't like fish, doesn't like to clean them, doesn't like to smell them. He goes fishing for the scenery.

"Try one?" he says, offering Sonny the makings of a hand-rolled cigarette. And then he begins an wistful monologue, about a time 20 years ago when he brought a girl out to the tank and they swam in it and rode their horses across it and were in love on its banks. The girl had life and fire, but she was already married, and Sam even then was no longer young. As he tells the story, we realize we are listening to the sustaining myth of Sam's life, the vision of beauty that keeps him going in the dying town of Anarene, Texas.

The scene has a direct inspiration, I believe, for the writer-director, Peter Bogdanovich. I'm sure he was thinking of the monologue in "Citizen Kane" (1941) where old Mr. Bernstein remembers a girl with a parasol who he saw once, 50 years ago, and still cherishes in his memory as a beacon of what could have been.

Sam, played by the veteran Western actor Ben Johnson, is the soul of Anarene. He owns the diner, the pool hall, and the Royal theater, and without those three places, there is no place to go in Anarene except to bed, which explains the desperate and lonely adulteries and teenage fumblings that pass for sex. Among those who treasure Sam the Lion are Sonny Crawford (Timothy Bottoms) and Duane Jackson (Jeff Bridges), co-captains of the local football team, which is so bad the local men look at them in disgust and shake their heads.

Bogdanovich's 1971 film, based on the novel by Larry McMurtry, opens on Saturday, Nov. 12, 1951 -- the eve of the Korean War, and the beginning of the end for movie houses like the Royal, where Sonny grapples in the back row with his plump girlfriend Charlene (Sharon Taggart), while enviously watching Duane kiss the town beauty, Jacy Farrow (Cybill Shepherd). On the screen are classics like "Red River" and "Wagonmaster," which speak to the legends of this land, but already the ugly little black and white sets in local living rooms are hypnotizing the locals with "Strike It Rich!" and other banal trivialities that have nothing to do with their lives, or anyone's lives.

It always seems too hot or too cold in Anarene. A wind blows down the deserted main street and in through the door of the pool hall. Sam the Lion hunches his shoulders into his sheepskin jacket. Bogdanovich and his cinematographer, Robert Surtees, use a lot of horizontal pans to show the town hunkered down flat against the land; we have the feeling that emptiness surrounds these weathered buildings.

Duane and Sonny presumably have homes to go to, but their lives center around their cars -- Sonny's old pickup and Duane's like-new Mercury. In high school., a valiant English teacher (John Hillerman) reads from Keats that truth is beauty and beauty is truth, but truth and beauty seem remote from their lives, and the most wonderful thing that happens to Sonny is that Ruth (Cloris Leachman), the 40-ish wife of the football coach, takes him to her bed and treats him fondly. Duane, meanwhile, is toyed with by Jacy, who has her eyes on a rich kid in a nearby city and isn't above getting an invitation to his pool party by leading on the local goofball Lester (Randy Quaid).

Jacy's parents are what pass for rich in the town, and her mother Lois (Ellen Burstyn) is still pretty, although she spends too much time drinking on the sofa next to her TV-mesmerized husband. Lois is at least a realist, advising her daughter to sleep with Duane so she'll find out it's not as great as she thinks it is. Lois sometimes sleeps with one of her husband's oil hands, but like Ruth, she places no great faith in sex and yearns instead for tenderness and conversation and someone who has not been defeated by life.

When "The Last Picture Show" opened in 1971, it created a sensation. I saw it on its first engagement in New York, where audiences crowded in with the eagerness reserved, these days, for teenage action pictures. It felt new and old at the same time. Bogdanovich, a film critic and acolyte of Welles, shot in black and white, which gave the film a timelessness, then and now. He used a soundtrack entirely made up of pop songs, which was something new (Scorsese had tried it with his first film, in 1967). It was mostly Hank Williams who provided the soundtrack for these lives, and Bogdanovich used real sources in the scenes for the music -- radios, jukeboxes -- where "Cold, Cold Heart" and "Why Don't You Love Me (Like You Used to Do)" commented directly on the action.

We had not seen these faces before, except for Ben Johnson and a few other supporting players. Like "Citizen Kane" by his hero, Bogdanovich made a film introducing future stars. Cybill Shepherd was in her first film. Tim Bottoms was in his second but spent his first, "Johnny Got His Gun," as a soldier who could not see, hear or speak. Jeff Bridges had done nothing memorable, and Cloris Leachman and Ellen Burstyn caught fire with their roles here. For Leachman and Ben Johnson, who for years gave dependable support in the John Ford stock company, there were supporting actor Oscars.

The film has an unadorned honesty that came as a jolt after the pyrotechnics of the late 1960s. While the "Easy Rider" generation was celebrating a heedless freedom, Bogdanovich went back to the directness and simplicity of Ford, who he admired no less than Welles. But "The Last Picture Show" took place long after the heroics of "Red River" and the other classic Westerns. It was based on the first of many novels where Larry McMurtry (whose hometown of Archer City, Texas, supplied the location of Anarene) charted the Texans who came after the age of heroes.

Seeing the film once again, I was struck by how many of the scenes involve sex, and how little they involve eroticism. Cybill Shepherd's celebrated striptease on a diving board got a lot of attention at the time, but her character coldly uses sex as a way to get the best deal she can out of Anarene. The only real warmth comes from the Leachman character, Ruth, combing Sonny's hair while they're both fully dressed.

There is simply no way in this town to touch life and glow. The last ones who knew the secret were Sam the Lion and maybe Genevieve (Eileen Brennan), the waitress at Sam's diner. Sonny and Duane, we suspect, will grow up to drink too much, work too hard and marry desperate women -- unless Duane is killed first in Korea. There is certainly no future for gentle Billy (Sam Bottoms), who always smiles but has no reason to.

The film is above all an evocation of mood. It is about a town with no reason to exist, and people with no reason to live there. The only hope is in transgression, as Ruth knows when she seduces Sonny, the boy half her age. And then he, too, falls briefly under the spell of Jacy, leading to the powerful scene where he returns to Ruth and she hurls the coffeepot against the wall and spills out her soul. (Leachman did that scene in one take, first time, no rehearsal.)

At the end, Bogdanovich shows us brief moving shots of his stars, with titles giving their names and characters. This is a reminder of Welles' credits at the end of "Citizen Kane." In 1971, those played simply as effective titles.

Today, seeing Bridges, Bottoms, Burstyn, Leachman, Brennan, Quaid, Johnson (who died in 1996) and the others 33 years later, the images in the credits have a sharp poignancy. There is a line from "Citizen Kane" that comes to mind: "I was there before the beginning ... and now, I'm here after the end."

Bogdanovich was there after the end, too. In 1990, he gathered most of the members of his original cast for "Texasville," a sequel set in the early '80s, some 30 years after the period of the original. 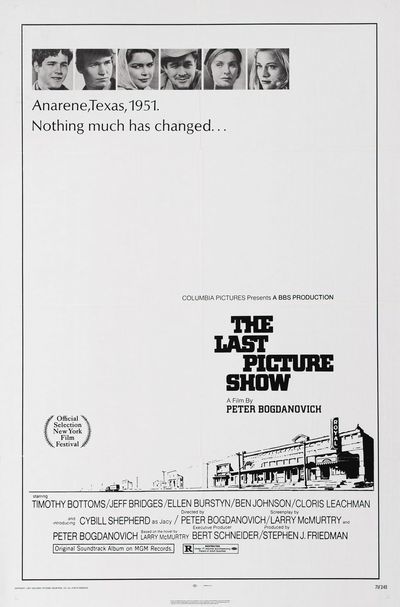