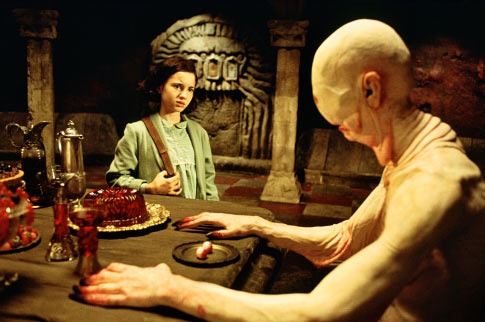 There is none so blind as he who will not see. It's true. Ray Stevens sang it in the hit single "Everything is Beautiful (In Its Own Way)." I have no idea why I just mentioned that.

MSN Movies has published its main movie contributors' lists of the year's best films (and, yeah, we cheated freely -- our lists don't all contain ten titles). Here you'll find lists from me and (in alphabetical order) some other names you may recognize: Sean Axmaker, Gregory Ellwood, David Fear, Richard T. Jameson, MSN Movies chieftan Dave McCoy, Kim Morgan and Kathleen Murphy. As is my custom, I don't make what I see as artificial and qualitatively meaningless distinctions between categories (documentary, "foreign language") because, the way I see it, a feature film is a feature film, and a doc or a movie from somewhere else in the world is every bit as much a product of conscious and unconscious artistic decision-making, skill, planning, determination and luck as any other kind of picture with a running time of around an hour or more. (That, arguably, is a meaningless distinction, too. Heck, "Simon of the Desert" and "Wavelength" are only 45 minutes long, "Sherlock, Jr." is 44, " and "Un Chien Andalou" is only sweet 16!)

I'm cooking up a different sort of list I want to do for Scanners and RogerEbert.com, but if you want to see my faves (as of my deadline last week -- and nothing I've seen since then would change my rankings), use the link above and/or check after the jump. Please see my post about listmaking in general, below... and please, as always, feel free to post your own lists and responses in the comments section!

In the meantime, here are just a few of the titles favored by esteemed critical colleagues and friends (or hordes of ticket-buyers unknown to me) that I haven't seen yet: "Army of Shadows," "Three Times," "Idiocracy," "The Lives of Others," "Iraq in Fragments," "Iraq for Sale," "The Blood of My Brother," "When the Levees Broke: A Requiem in Four Acts," "The War Tapes," "Days of Glory" (aka "Indigènes"), "An Inconvenient Truth," "Jesus Camp," "Deliver Us From Evil," "Our Daily Bread," "The Intruder," "Inland Empire," "The Proposition," "Neil Young: Heart of Gold," "Marie Antoinette," "The Painted Veil," "A Scanner Darkly," "Fast Food Nation," "Climates," "The Last King of Scotland," "Catch a Fire," "Dreamgirls," "Apocalypto," "Blood Diamond," "The Wire: Season Four," "Deadwood: Season Three," "Superman Returns," "Pirates of the Caribbean: Dead Man's Chest," "Sherrybaby," "Our Brand is Crisis," "The Devil Wears Prada," "V for Vendetta," "The Pursuit of Happyness," "The Da Vinci Code," "X Men: The Last Stand," "The Hills Have Eyes," "Dave Chappelle's Block Party," any of the big animated films, "Casino Royale" (2007)...

Who knows, I might be able to squeeze another "ten-best" out of these, if only I'd had stamina enough and time. On the other hand, some of these I've chosen to avoid for my own reasons -- but, as my experience with "Flags of Our Fathers"/"Letters from Iwo Jima" demonstrates, just because I find myself resisting seeing something doesn't mean I won't find it worthwhile if and when I eventually get around to it...

1. "Pan's Labyrinth": I don't know that I've ever seen a more richly and fully realized fantasy film. In Guillermo del Toro's masterpiece, Fascist Spain and a little girl's imaginary world of monsters and fairies are two sides of the same coin. One isn't the "fantasy escape" from, or the "harsh contrast" to, the other; each is a reverse impression of the same treacherous experience.

2. "Perfume: The Story of a Murderer": Think of it as "cine-sthesia" -- a lush, sensuous, brutal fable (aren't fables meant to be all that?) in which sight and sound are masterfully orchestrated in the service of ... smell. My senses were re-invigorated. My jaw was on the floor half the time, and my eyes, ears and nostrils wide open from beginning to end. [Fortunately, the theater was dark so nobody had to see me looking like a Tex Avery character.]

3. "Man Push Cart": A Pakistani pushcart vendor survives one day at a time on the streets of midtown Manhattan. A modern Sisyphean tale of urban survival, told with Bressonian minimalism and specificity -- and if that doesn't sound like a rip-roaring good time, it's also spellbinding, suspenseful, heartbreaking and dazzling to behold.

4. "A Prairie Home Companion": Robert Altman's vision was always so wide that it embraced life and death at the same time, but never so warmly and wisely as in his valedictory film -- an elegy for a career and a companion to "Nashville," especially.

5. "The Descent": Six women go spelunking in the bowels of Mother Earth. A plunge into subterranean horror, deep underground where our bones will someday lay, and even deeper into the darkness of the subconscious.

6. "The Bridge": Another kind of plunge into the abyss: Cameras capture suicides off the Golden Gate Bridge over the course of one year. The filmmakers work backwards to fill in the gaps, to see if it's possible to understand what brought these people out onto the span. Maybe the only film that has ever dealt so honestly (yet also hauntingly, poetically) with the most important decision of people's lives (that is, whether to continue living them) -- a decision many have to make again and again and again, every waking moment.

7. "51 Birch Street": Nice house, nice neighborhood, nice Jewish family. Documentarian and sometime wedding videographer Doug Block investigates the mystery of his own parents' marriage -- and all the drama of "ordinary lives" emerges, as we see how the past flows into the present.

8. "Half Nelson" / "Old Joy": Two tales of struggle with personal and political idealism as Americans (in the urban Northeast and the bucolic Pacific Northwest, respectively) age into their 30s and 40s, worried about what they've lost, who they've become and who they're going to become.

9. "Flags of Our Fathers" / "Letters from Iwo Jima": Images, words, symbols, stories, propaganda ... Clint Eastwood's two-part epic, ostensibly looking at the battle for Iwo Jima, first from the American and then from the Japanese point of view, is really about the meta-weapons of war -- powerful as any atomic bomb. As Peter Bogdanovich says of "The Man Who Shot Liberty Valance" in "This Is John Ford," these movies understand the value (maybe even the necessity) of "printing the legend" -- but the director also makes a point of showing you the truth behind it.

10. "Borat: Cultural Learnings of America for Make Benefit Glorious Nation of Kazakhstan": This is what movies do best: They show you the world through someone else's eyes, even when that someone is a ridiculous cretin from a mythical Kazakhstan. I don't think we've even begun to consciously understand why this movie is so funny, or how it managed to resonate so strongly with a mainstream American audience. But the comedy of Sacha Baron Cohen smartly and hilariously connects the anarchic wit of W.C. Fields, the Marx Bros. and Preston Sturges with the reality-based satire of "The Daily Show" and "The Colbert Report."

Worst "World Trade Center": Of course it's not really the worst movie of 2006, not even close. But Oliver Stone's superficially "nonpolitical" film about Sept. 11 could not have been more political, almost by definition. As such, it's perhaps the most deceptive and dishonest. It will always be "too soon" -- and "too late" -- to make a feel-good movie about Sept. 11 simply by narrowing or widening the zoom (in to the guys in the rubble, or out to the rescuing Marine headed to avenge this slaughter in Iraq), but what Stone served up was the knee-jerk, Rumsfeldian antithesis of the ambivalent wisdom expressed in Eastwood's 2006 war movies.

P.S. About those two top choices: No, I did not succumb to "end-of-the-year" syndrome. "Pan's Labyrinth" has been my favorite movie of the year ever since I saw it (and wrote about it) in Toronto in September. And "Perfume" was a big surprise -- seen at a screening sometime in November (or was it October?). Anyway, both have stayed with me.