Rachid Bouchareb's "Days of Glory" is a rousing, old-fashioned World War II platoon movie in the gritty tradition of combat pictures like Don Siegel's "Hell is for Heroes," Sam Fuller's "The Big Red One" and Steven Spielberg's "Saving Private Ryan." And if the word "Glory" in the English title reminds you of the 1989 multiple-Oscar-winning movie with Morgan Freeman and Denzel Washington, about the first company of black soldiers during the American Civil War ... well, that's probably just fine with the film's U.S. distributors, the Weinstein Company and IFC Films.

The original French title is "Indigènes," a term for hundreds of thousands of "indigenous" colonial African soldiers who fought for France in World War II. The film, the Algerian nominee for the best foreign-language film Oscar and the winner of a special acting ensemble award at the Cannes Film Festival, follows a group of indigenes from Algeria to Morocco, through Italy to Provence, and finally to a village in Alsace, where they station themselves in anticipation of joining the invading Allied troops.

These men consider themselves French citizens, but the French military treats them as second-class soldiers, denying them equipment, promotions, even tomatoes with their rations. Officers exploit their fervent patriotism, making promises they have no intention of keeping, to motivate the "wogs" to fight and die for the "fatherland" that treats them like bastard children.

As is customary for this kind of genre picture, the main characters are not much more than types, but the actors are splendid at fleshing them out. Said (popular French comedian and sitcom star Jamel Debbouze) leaves his impoverished life to enlist in the Army, becoming a personal assistant (or man-servant) to Sgt. Martinez (Bernard Blancan). He's a small, quiet man, a poor illiterate peasant as rough as the perpetually heavy black stubble on his face. Loyal to his sergeant, the only person of stature and authority who has ever taken notice of him, Said is outwardly humble but has a fierce temper when his dignity is insulted.

As he proudly recounts his battlefield exploits to a young Frenchwoman, Said's tale of heroism climaxes in a passionately declaration: "I free a country and it's my country. Even if I've never seen it before. It's my country." This speech is doubly touching because it's not only an expression of Said's hopes for himself as a Frenchman, but a somewhat awkward and overzealous attempt at seduction. The women of France, he fought for them and they should be his, too.

The mournful company marksman Messaoud (Roschdy Zem), who has a tattoo on his chest proclaiming himself unlucky, pines for a French girl back in Marseilles. He keeps writing to her, but her replies have stopped arriving. Abdelkader (Sami Bouajila), a corporal, is both the highest-ranking and the most intellectual of the bunch. He's a natural leader and would also be the best candidate to rise through the ranks, were it not for his heartfelt devotion to the principles of liberte, egalite and fraternite that he and his African comrades are supposedly battling to preserve in the face of Nazi fascism. The army wants soldiers who blindly follow orders, not men like Abdelkader, who think for themselves and speak up when their officers violate the military code.

The Moroccan Berber brothers Yassir (Samy Naceri) and Larbi (Asaad Bouab) just struggle to get through the war alive, to survive day by day. They see their service pragmatically as a ticket to a better life, and, meanwhile, they aren't beneath stealing from corpses on the battlefield.

"Days of Glory" is an infantry film, and Bouchareb puts his camera right down in the dirt with his men. That's the thing that strikes you most about the battle scenes, which are shot with impact and immediacy -- not the blood, not the smoke, but the dirt. When charges explode, the soldiers are showered in soil and the image itself goes black, as if the men and the camera were already being buried. In one harrowing sequence, as the soldiers swarm up a slope to overwhelm a Nazi bunker, Bouchareb cuts from ground-level action to the position of officers watching from afar. It's a moment out of Tolstoy, in which the men really do resemble ants scrambling over a hill. Scores of them drop dead in their tracks, but the waves of specks keep advancing until they seem unstoppable.

Like "Saving Private Ryan," "Days of Glory" ends with a visit to a military cemetery years later. We learn that, as the decolonization of Africa began (Algeria won its independence in 1962), the French government froze pensions for all former Empire veterans, and benefits for the wounded, at 1959 levels. It was not until 2006, after President Jacques Chirac saw "Days of Glory," that the pensions were fully restored. 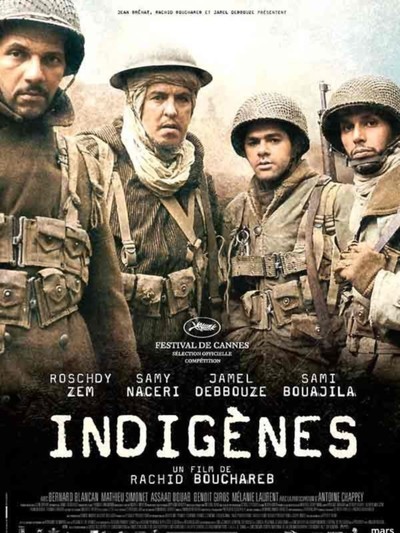