For a fraction of a second at the very beginning of Clint Eastwood's "Letters from Iwo Jima," you may think that you are gazing overhead at a field of stars. In fact, you are looking straight down into the ground, at waves of black sand on the volcanic island where, over the course of five weeks in February and March, 1945, an invasion force of 100,000 Americans (two thirds of them U.S. Marines) fought 22,000 entrenched Japanese infantrymen. Only 1,083 Japanese survived the battle, while 6,821 Americans were killed and 20,000 wounded.

It's a simple establishing shot: a tilt up from the beach where the Allied forces landed to Mount Suribachi, a rocky knob on the southern tip of the island where the Japanese holed up in a network of tunnels and bunkers, and on top of which the famous, iconic image of the raising of an American flag was taken. That classically heroic-looking photo, and the collateral damage from its exploitation as a propaganda tool to sell War Bonds, was the subject of Eastwood's 2006 "Flags of our Fathers," the companion piece (or other half) of "Letters From Iwo Jima," though it doesn't really matter which one you see first.

The opening moments of "Letters" have a cosmic zoom-like effect, taking us from the timeless and abstract (stars/sand) into a specific place and time: "Iwo Jima 2005," as a title denotes. It was on this barren little sulfuric spec in the Pacific Ocean, only about five miles from one end to the other, that so many people fought and died 60 years ago.

"Flags of Our Fathers" ended with a similar motion, going from memory-images of surviving Marines frolicking in the surf, to the Stars and Stripes atop Mount Suribachi and the battleships in the harbor, and finally up into the sky (another reason you might think you're looking up rather than down at the start of "Letters," which begins with a view in the opposite direction from the close of "Flags"). The camouflaged artillery that proved so deadly and menacing in "Flags" are, by the start of "Letters," just rusty relics at a war memorial site. Archeologists explore Suribachi's caves and tunnels, still marveling at how the soldiers ever managed to build them.

And then we're on the beach again, in 1945, as Japanese soldiers prepare for the invasion they know is coming by digging trenches in the sand. It looks like a futile, Sisyphean effort. In a letter to his wife (heard in voiceover) one of the diggers, a puppy-faced former baker named Saigo (Kazunari Ninomiya, in a thoroughly winning performance), writes philosophically: "This is the hole that we will fight and die in."

They might have died a lot sooner if they'd stuck with this ill-conceived sand strategy. When the new commander, General Tadamichi Kuribayashi (the always-commanding Ken Watanabe), arrives at Iwo Jima, he immediately changes plans, ordering men and artillery to dig in on higher ground. These are the preparations for the massive ambush we see in "Flags of Our Fathers."

The Japanese, who are seen as fierce, highly organized fighters in "Flags," aren't as well-prepared, or well-equipped, as we may have thought. Dashing Baron Nishi (Tsuyoshi Ihara), the Olympic equestrian star who once partied with Douglas Fairbanks and Mary Pickford in Hollywood, appears on the island with his horse, as a symbolic morale-boost for the men. But in a conversation with Kuribayashi over a bottle of Johnnie Walker, Nishi approaches the military reality they face in an indirect manner: "When you think about it," Nishi offers, "it is regrettable that most of the Combined Fleet was destroyed." This is the first news Kuribayashi has had of that particular catastrophe -- but he already knows he doesn't have the manpower or weaponry he needs to resist the pending invasion. (Again, parallels to under-equipped American soldiers being asked to hold ground in Iraq without the necessary material support from their leaders at home is a part of the movie's frame of reference.)

"The Imperial Headquarters is deceiving not just the people but us as well," Kuribayashi says. It's a line that could have been adapted from "Flags of Our Fathers," which was also an examination of various forms of propaganda, codes of honor, and nationalistic symbolism that are among the primary weapons in any war.

When young Saigo is conscripted into the Japanese army, he and his pregnant wife are stunned at the response of his neighbors and friends who, like brainwashed cultists, keep repeating that he is fortunate to be chosen to die for his country. The emphasis here is on the honor conveyed by death itself -- something we see later in the film when soldiers, aware that they're engaged in a hopeless battle, choose to kill themselves rather than fight to the death. One can't help recalling the words attributed to Gen. George S. Patton in 1944: "Now I want you to remember that no bastard ever won a war by dying for his country. You won it by making the other poor dumb bastard die for his country."

In both his films, Eastwood empathizes with the "expendable" soldier on the ground, the "poor bastard" who is only a pawn in a war conceived by generals and politicians, some of whom have never come anywhere near a battlefield or a combat zone. And Eastwood fully commits to a boots-on-the-ground POV: The raising of the American flag, presented as a routine, off-hand task to the soldiers in "Flags of Our Fathers" (and which would have remained that way if a photographer had not been present), is only glimpsed obliquely from afar by the Japanese in "Letters from Iwo Jima." Life or death, heroism or folly: It all comes down to which side you're on, and which piece of ground you're occupying, at any given moment in the battle. 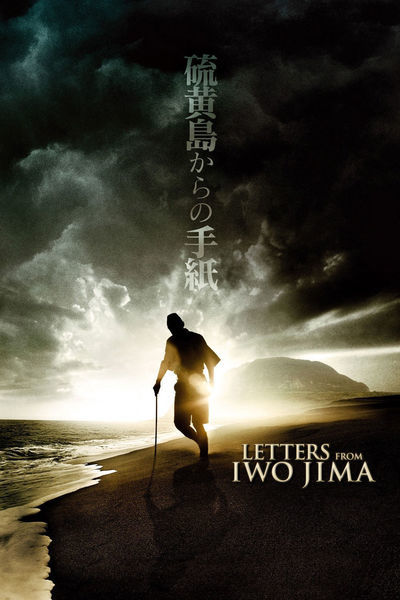