The air is alive in Turkish director Nuri Bilge Ceylon's "Climates" -- more alive than the characters, who are like inert lumps of rock or sand. But that's the point. In this movie, so finely attuned to frequencies of light and sound, it's the invisible space around the characters that swarms with life and possibility. Their interior lives are muddled, opaque even to themselves, and they can't express anything directly, not even their own anguish and dissatisfaction.

But the atmosphere! We soak up the light, feel the heat or the damp or the chill. And beyond the realm of the visible, the soundtrack swirls with the buzzing of insects, the flapping and chirping of birds, the barking of dogs, the drone of boat or aircraft engines in the distance -- or just the sounds of the wind, the rain, the snow or the sea.

The concept is to express what the characters are feeling better than they can, through images (mostly long, static takes) and sound, with minimal dialogue and even less narrative.

When we meet Isa (writer-director Ceylon) and Bahar (Ebru Ceylan, the real-life wife of the filmmaker), they are wandering through ruins in Kas that seem to express the current state of their relationship: dilapidated, empty, dead. They are both miserable, suffocating, as if the mere presence of the other person were sucking all the oxygen out of the air, even the ocean air. Isa's numb from the waist up, sleeping with his head resting in an empty drawer (for neck support), while Bahar alternates between sullenly imploding with self-pity or bitterly exploding with maniacal rage. They are everyone's nightmare of a couple.

One day, on the beach, they finally split. Back in Istanbul, the skies open up, relief falling like the gentle rain from heaven. But after some rough (and presumably cathartic) clothes-ripping sex with his sometime lover, the emotionally inscrutable Serap (Nazan Kirilmis) who is prone to prolonged fits of joyless laughter, Isa finds himself drawn back to Bahar and travels to the snowy location where she is working as the art director on a television series.

That's about all the story there is, because "Climates" isn't driven by plot and character, but by sensory information, visual and audible. It's a movie of languidly composed landscapes (which can actually be quite stimulating), and the characters are inseparable from the geography and the weather -- not unlike the enigmatic expressions of existential ennui in the '60s films of Michelangelo Antonioni ("Eclipse," "Red Desert") and Alain Resnais ("Last Year at Marienbad"). Ceylan shoots one bedroom scene as if the characters' heads were planets and their mostly clothed bodies aspects of the terrain. A shot of a plane flying across a white sky as snow falls into the lens is, in context, inexplicably breathtaking. "Climates" is a stunning film to look at, and to listen to. 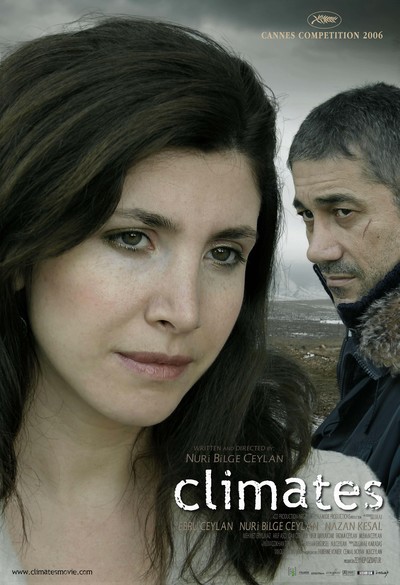