In 1962, film critic and French New Wave director François Truffaut sat down with Alfred Hitchcock to record a week-long interview about Hitchcock’s entire body of work. These sessions beget “Hitchcock/Truffaut,” a book whose raison d'être was to show American critics that they were underestimating the cinematic richness of Hitchcock’s work. At the time, Hitchcock had been deemed a director of entertaining movies, lacking substance and importance. Despite his fifth directing Oscar nod for “Psycho,” Hitchcock was mainly seen as a director for the unwashed masses of general audiences. Truffaut aimed to fix that, and the resulting book is a master class in the fine art of directing, filled with photographs and the Master of Suspense’s candid observations of his oeuvre. Since its first edition published in 1966, “Hitchcock/Truffaut” has been a staple and a fixture of any cinephile’s bookshelf.

Fast-forward to 2015, where film critic and documentarian Kent Jones brings us the movie version of this essential book. Jones’ take on “Hitchcock/Truffaut” is equal parts adaptation, CliffsNotes guide and commentary by a slew of directors influenced by Hitchcock’s work. The film is also a completely entertaining and informative gift to movie lovers, a work constructed with care, humor and insight. Though Hitchcock made his last movie (“Family Plot") 40 years ago, he continues to influence in an almost transparent manner. Hitchcock is in the air that today’s directors breathe, and “Hitchcock/Truffaut” aims to remind us of this fact.

Jones supplements his film clips and interviews with audio from the original 27 hours of interview recordings (17 hours of which are available online). We hear Hitchcock discuss, in directorial terms, movies such as “Sabotage,” “Vertigo” and “The Lodger.” We also hear Truffaut describing a scene from “The 400 Blows” as a follow-up to Hitch’s description of “suspense vs. surprise.” This is one of the most interesting passages in the film, a moment where the interviewer and the subject exchange places, comparing notes as footage of Truffaut’s film plays onscreen. Throughout “Hitchcock/Truffaut,” one gets the feeling that the visual nature of directing forces a filmmaker to deal with his or her obsessions, explicitly or implicitly.

“If you think you can hide your prurient interests as a director, you’re crazy,” says David Fincher, one of several directors testifying before the camera. Fincher marvels at how blatantly Hitchcock expressed his own psychological traumas and aforementioned interests, several of which revolved around fear and sex. The famous story of how Hitchcock’s father had him locked up by Scotland Yard as a child is recounted here, and Hitchcock’s description of Kim Novak’s famous transformation scene in “Vertigo” has a frank sexuality that’s as accurate as it is racy. In James Gray’s opinion, this scene contains “the greatest shot in the history of cinema.”

“Hitchcock/Truffaut” spends a fair amount of time on “Vertigo”, which isn’t surprising given that film’s current placement atop the Sight and Sound list. Paul Schrader calls it “a forbidden document.” Martin Scorsese discusses how difficult it was to get a copy of the film screened back in the '60s, as Hitchcock’s films were looked at with scorn and derision by the art theaters of the day. Since the film was not a success upon first run, Hitchcock sounds a bit reserved when talking about the film; people didn’t discuss their flops back then. “You have a problem with it?” asks Truffaut. Hitchcock responds that he took issue with “the hole in the story” regarding the murderer. This is an interesting contrast to his view on the numerous plot holes in hits like “North by Northwest." “I have this saying,” he tells Truffaut in regard to those who complain about implausibility: “Logic is dull.”

Throughout “Hitchcock/Truffaut”, Jones gives us delicious quotes from the interview. "'The Lodger' is the first movie where I exercised any style," says the man who started out in silent movies when he was 23. Before directing, Hitchcock wrote dialogue titles and used his engineering background to draw and layout scenes. Truffaut suggests that those who started out as silent film directors know something that those who started out in the sound era will never know. The lack of sound forced a purer evocation of the cinema as a visual medium. “You can watch a Hitchcock movie with the sound off,” we’re told, “and you’ll still be able to follow it.”

This notion extends to the use of the suspense element for which Hitchcock is most known. The visuals transcend the language barrier. “The Japanese audience should scream at the same time the Indian audience does,” Hitchcock says. Jones uses a Tippi Hedren scene from “The Birds” to supplement Hitchcock’s discussion on how he uses space and an actor’s place within it to heighten tension, bringing out a particular element that I hadn’t noticed in the numerous times I’d seen the film.

“Hitchcock/Truffaut” offers a lot of ideas to contemplate and discuss, especially if you’re a lover of Hitchcock’s works. Its most intriguing takeaway is a question Hitchcock posed to Truffaut. In so many words, he wonders if he should have experimented more with characters and if he had become “a prisoner of my own form.” It’s a fascinating question, one I carried with me after I left the theater. Wisely, Jones doesn’t provide any answers, for there isn’t a definitive one to be had. Instead, he gives us David Fincher’s quote that “there was a set of rules, and Hitchcock broke them all.”

One interview subject you might be expecting is missing from “Hitchcock/Truffaut." Brian De Palma declined to appear in the film, but he had a good reason. He was busy sitting with Noah Baumbach and Jake Paltrow for their one-man interview/documentary, "De Palma." That film, which is also quite good, would make a great double feature with “Hitchcock/Truffaut." Both films feature a director talking to another director about his body of work. The similarities are complementary, and I can think of no better way to waste an afternoon if you love movies. 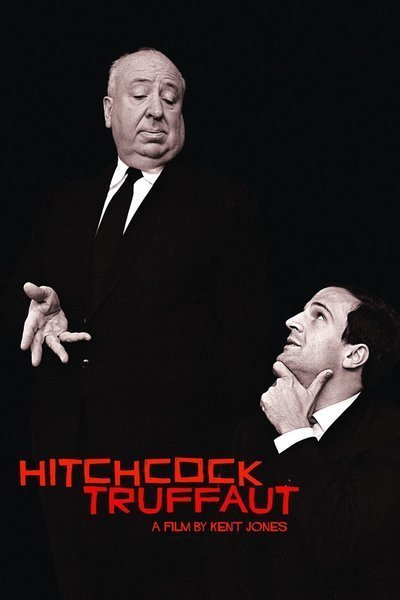 Steven Spielberg as Himself

Wes Anderson as Himself

David Fincher as Himself

Alfred Hitchcock as Himself

Richard Linklater as Himself

Alfred Hitchcock as Himself (archive footage)

Brian De Palma as Himself

François Truffaut as Himself (archive footage)

Olivier Assayas as Himself

Paul Schrader as Himself

James Gray as Himself

Kiyoshi Kurosawa as Himself

Arnaud Desplechin as Himself