Having written and/or directed the likes of "Training Day," "Harsh Times" and "End of Watch," David Ayer has staked his claim as being one of Hollywood's go-to guys for wildly implausible and inexplicably celebrated sagas involving cops who are on (or at least adjacent to) the edge. With his latest work, "Sabotage," he has divorced himself from the recurring elements of his filmography in two key areas by giving viewers a story that focuses on DEA agents who are on the edge and which is so preposterous that no sane person could possibly celebrate it as anything other than inadvertent comedy. This could well be the single most implausible film playing at your multiplex this weekend and bear in mind, "Mr. Peabody & Sherman" is still in release.

One-time action king Arnold Schwarzenegger stars as John "Breacher" Wharton, a two-fisted, hard-drinking Atlanta-based DEA agent who, as the story opens, leads a ragtag group of colorfully nicknamed agent—including "Monster" (Sam Worthington)' "Grinder" (Joe Manganiello), "Sugar" (Terrence Howard), "Neck" (Josh Holloway), "Tripod" (Max Martini), "Smoke" (Mark Schlegel) and "Lizzy" (Mirelle Enos)—on a raid of a cartel safe house that they are using as a smokescreen for stealing $10 million dollars in drug money for themselves. Alas, when they go to retrieve the money later on, they find that it has disappeared and to make matters worse, their higher-ups somehow know about the missing money and yank them all out of the field while trying to find enough conclusive evidence.

After eight months, the Feds throw in the towel and not only reinstate them all but allow them to reform their group on the basis that no one else will work with them because of the shame they have brought on the department. At this point, someone begins bumping them off one by one in extraordinarily elaborate and gruesome ways. At first, the assumption is that one of the cartels they have tangled with in the past is behind the killings, most likely the one from whom they took the still-missing money. However, as the body count continues to rise, the increasingly paranoid gang begins to suspect that one of their own is responsible. As tensions mount, Breacher, along with a local cop (Olivia Williams), tries to get to the bottom of the murders while confronting the dark secrets that led to him trying to steal all the money in the first place.

Essentially a head-on collision between a gritty cop drama and an over-the-top slasher film that leaves no survivors, "Sabotage" is a genuinely weird movie in most respects but unfortunately, it isn't so much interesting-weird as it is "What in God's name were they thinking?"–weird. The storyline is such absolute nonsense from top to bottom that it makes the Beastie Boys music video for their song "Sabotage"—a knowing spoof of Seventies-era TV cop dramas—seem like "Heat" in terms of dramatic believability. To be fair to Ayer, a good portion of this lunacy may be he handiwork of co-writer Skip Woods, who has helped to pen such crimes against the action genre as "Swordfish," "The A-Team" and "A Good Day to Die Hard." Whoever is ultimately responsible for it, the screenplay is little more than a foul-mouthed stew of ridiculous twists, unpleasant characters and a conclusion that basically abdicates all narrative responsibilities in order to jam in a chase, a violent concluding shootout and an even more violent coda that feels trucked in from another movie.

Although the film does him no favors, I can understand why Schwarzenegger signed on to this project—after the failures of "The Last Stand" and "Escape Plan," he no doubt felt the need to shake things up a bit. Unfortunately, the script does him no favors and most viewers will be thinking that he is just a tad too old to be playing this particular character. However, his always-unique line readings do inspire the closest that the film gets to actual entertainment, which is more than can be said for his co-stars.

Terrence Howard seems to be hoping that Don Cheadle will turn up to relieve him, Josh Holloway plays essentially the same part that he did in the last "Mission: Impossible" film and Mireille Enos, stuck with one of the more embarrassing female roles in recent memory, overacts up a storm. As for Sam Worthington, he is so forgettable that he barely registers even when he is front and center. The closest thing to a good performance comes from Joe Manganiello, who displays enough wit and charisma to sort of make up for his cardboard character.

One last thing about "Sabotage"—it is really, really violent. Yeah, a certain amount of violence is to be expected from a Schwarzenegger action epic but the red and grey stuff flows so freely here that even Dario Argento might have suggested dialing it back a bit. Under most circumstances, I don't have a problem with extreme violence in a film as long as it can be artistically justified but it is laid on too thick this time around and grows very tiresome in no time at all. In other words, "Sabotage" is a film that is a bloody bore in every sense of the word. 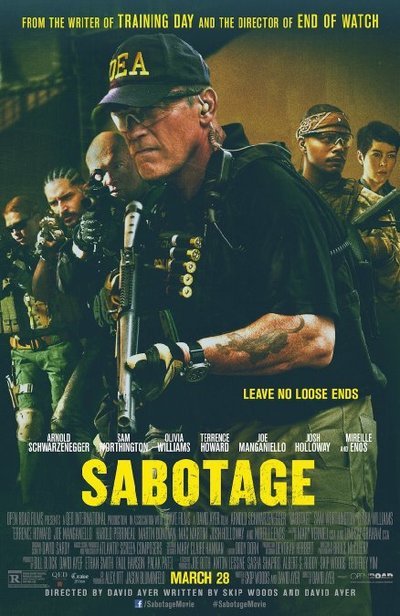