At one point in "Avengers: Age of Ultron," the hammer-swinging superhero Thor (Chris Hemsworth) tells the android villain Ultron (James Spader) that “there’s no need to break anything.” “Clearly you’ve never made an omelet,” Ultron replies. It's nice when a movie hands you a metaphor like that. The second “Avengers” is a gigantic omelet combining everything in writer-director Joss Whedon's refrigerator, pantry and spice rack, and dozens of eggs are broken in its creation. This film about a team of good guys battling a brilliant, genocidal robot is bigger, louder and more disjointed than the first "Avengers”—which, like this new installment, was a crescendo picture, meant to merge strands from solo superhero movies within the Marvel Universe. But it’s also got more personality—specifically Whedon’s—than any other film in the now seven-year-old franchise. And in its growing pains you can see a future in which these corporate movies might indeed be art, or at least unique expressions, rather than monotonous quarterly displays of things crashing into other things, with splashes of personality designed to fool people into thinking they're not just widgets stamped out in Marvel's hit factory.

You shouldn’t go into it expecting a smooth ride, and you should know that there are basic ways in which it's not up to snuff. There's too much over-edited "coverage" by multiple cameras, as opposed to true direction with purpose and flair. (Marvel farms out the planning of its action scenes to second unit crews and special effects artists long before the actors arrive on set, which might account for the choppy, incoherent, “just get it done” feeling of some early showdowns.) It isn't until the final third that the movie's destructo-ramas develop personalities as distinctive as the film's dialogue scenes. Between Captain America (Chris Evans), Iron Man (Robert Downey, Jr.), Black Widow (Scarlett Johansson), the Hulk (Mark Ruffalo), Hawkeye (Jeremy Renner) and Thor; a number of supporting and cameo players; and several new leads, including Ultron’s henchpersons, the twins Quicksilver (Aaron Taylor-Johnson) and Scarlet Witch (Elizabeth Olsen), there might just be too many characters, even for a two-and-a-half-hour movie. (Whedon's pre-release cut came in at three-plus hours; could this be one of those rare cases where longer is better?) The film will do nothing to quell complaints that the superhero genre is sexist: Black Widow is involved in yet another relationship with a male Avenger and burdened with a tragic backstory equating motherhood with womanly fulfillment, and while Scarlet Witch has some pleasingly Carrie-like rampages, she isn't given enough to do.

Still, given the band-of-heroes conceit and the mandate to serve as a high point in an ongoing mega-narrative, it’s hard to imagine "Age of Ultron" handily dispatching any of these problems. And as in the first “Avengers,” which was also overstuffed, Whedon manages to refine the main players’ personalities and set them against each other, often in logistically complex conversations between five or more people: action scenes of a different sort.

Captain America and Tony Stark/Iron Man are at the heart of this one. They’re always more intriguing when set against each other than when they’re claiming the spotlight in their own movies, but Whedon, who also serves as a consultant and dialogue polisher on other Marvel entries, has taken their conflict a step further by drawing on events in “Iron Man 3” and “Captain America: The Winter Soldier.” It’s Stark who creates the titular bad guy—with the reluctant help of scientist and part-time Hulk Bruce Banner—in response to trauma he suffered while battling Thor’s brother Loki and his extraterrestrial allies in the first “Avengers.” Ultron is supposed to serve as a Skynet-like artificial intelligence network that detects apocalyptic threats and swiftly destroys them. Cap saw the horrific outgrowth of this mentality in the second “Captain America," in which millions of alleged terrorists were nearly  wiped out by S.H.I.E.L.D. in simultaneous extra-judicial assassinations. Cap is appalled both by the Ultron project itself and the fact that Stark started it in secret because he “didn’t want to hear the ‘man-is-not-meant-to-meddle medley’” from his fellow Avengers. He was right to worry. Like many a sci-fi robot or Frankenstein’s monster, the creature has a different idea of what constitutes a threat (spoiler: it’s us).

All of which makes "Age of Ultron" a metaphorical working-through of America's War on Terror, with Cap representing a principled, transparent military, answering to civilian authority, and Stark as the more paternalistic military-industrial response to 9/11 type threats, treating the masses as unruly kids who aren't allowed a voice on grounds that all they’ll do is squabble and finger-point while the enemy-du-jour gathers strength. There are accusations of hypocrisy from both sides. Some of Whedon’s dialogue has the sting of political satire: Cap warns Tony that “every time someone tries to win a war before it starts, people die,” a not-too-veiled slap at post-9/11 American foreign policy, while Ultron chides Cap as “God's righteous man, pretending you can live without a war,” a comment that indicts the United States itself, if you read Cap as a beefed-up Uncle Sam. Ultron, meanwhile, is another example of faith in technology run amok. He fancies himself a robot deity and creates other, smaller robots in his own image (all of which speak in Spader’s voice), but he’s the sadistic God of “King Lear,” a wanton boy smiting flies for sport.

For all its missteps, "Age of Ultron" is remarkable. If it’s a failure, as many critics insist, it’s a failure like Ang Lee’s “Hulk,” “Superman Returns” or “The Dark Knight Rises,” which is to say that it’s much more distinctively personal than most of the superhero movies whose titles are synonyms for success. There are points where the movie evokes not other Marvel spectaculars, but Whedon TV series like “Buffy the Vampire Slayer” and “Angel,” where the fun came from watching heroes and villains who were aware of themselves as heroes and villains work through psychological issues while trading screwball comedy dialogue along with body blows. In its lumpy-porridge way, this film makes a better case than any other Marvel picture for the notion that quarter-billion-dollar-budgeted, CGI-festooned slabs of multimedia synergy can be art, too, provided they're made by an artist with a vision, and said artist appears to be in control of at least part of the production. (I say "part" because Whedon is on record suggesting that this movie’s production broke his spirits; that could mean that what we’re seeing onscreen is the best he can do, considering that the true auteurs of the Marvel films are executive producer Kevin Feige and his marketing department.)

Amid the usual quota of quips and lightning and robots and explosions are moments of pathos, splendor, sentiment, and operatic horror. There’s quotable dialogue, delivered with the deadpan camaraderie of Howard Hawks ("Bringing up Baby," "Rio Bravo’), and scenes that evoke earlier classics without feeling too obviously like homages. The interaction between Black Widow and her erstwhile sweetheart, Bruce Banner, channels King Kong: she interrupts his Hulk-outs by holding up a slender hand with slightly curved fingers, and after a moment's hesitation, the green giant reaches out in kind, like a curious ape touching his reflection in a fun-house mirror. A lyrical slow-motion set-piece sees the Avengers battling waves of Ultron’s android minions in a ruined cathedral, like the Bishop gang fending off Mapache’s army in “The Wild Bunch." The circling camera movements are echoed in the film's credits sequence, which visualizes the film's heroes and villains as figures in a classical sculpture: Marvel in marble. The design touches are swell: Ultron might be the most overtly Jack Kirby-esque apparition in any Marvel film, his expressive face comprised of thin, overlapping plates.

Key lines tease out the superhero genre's kinship to horror. "Maybe I am a monster," a character admits. "I'm not sure that I would know if I were one." Conversations and monologues consider the relationship between chaos and control, creation and destruction that drives not just action cinema but life itself. "When the universe starts to settle," Ultron says, "God throws a stone at it." Most surprising and welcome of all is the way Whedon builds criticism of the superhero genre's disinterest in property destruction and civilian casualties (displayed most callously in "Man of Steel") into the plot. "Ultron can't tell the difference between saving the world and destroying it," Scarlet Witch chides. "Where do you think he gets that?"

It would be silly to position Marvel or Whedon or their fan army as underdogs. Once a niche genre, superhero films are now practically the official culture of the United States, and this entry will make a fortune no matter what anyone says about it. Still, I hope that even as people buy tickets out of habit, they'll see that there is, in fact, art happening on the screen, maybe for the first time since Marvel's march through American cinema started. "Age of Ultron" proves that a movie with stealth fighter jets, levitating cities and Hulk-on-robot fisticuffs can be as freewheeling as a no-budget indie. It's a shame to think that this film will be dog-piled for its imperfections rather than applauded for trying to prove that a seemingly inflexible genre can bend into strange and surprising shapes. 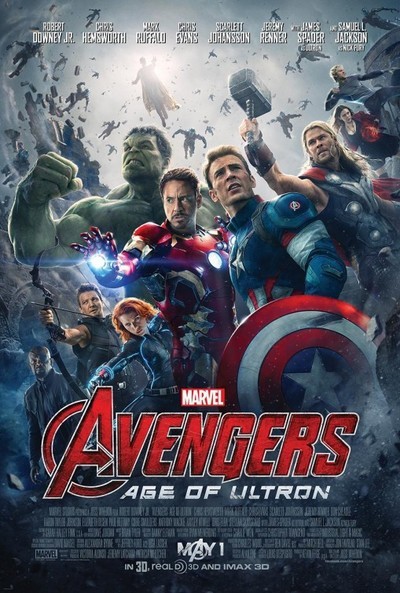 Rated PG-13 for intense sequences of sci-fi action, violence and destruction, and for some suggestive comments

Julie Delpy as Madame B